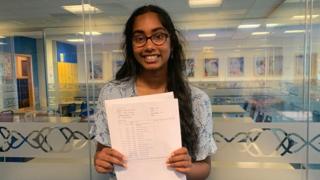 GCSE grades awarded to students on the Isle of Man this year were not “easily gained” following the cancellation of exams, a head teacher has said.

Ballakermeen High School’s Adrienne Burnett said the grades had been based on “the hard work of our students”.

More than 800 pupils on the island received results based on predicted marks, including Brintha Yasodaran, who attained 12 A* grades.

Mrs Burnette said it was “an outstanding achievement”.

Brintha, who also received a distinction, said it was “a real shock” to get such high marks across the board.

The Year 11 pupil, who plans to study medicine, said: “I thought I did ok but I didn’t know.

“It feels strange because to some degree I feel like I haven’t completed all the work that I need to do to deserve an A*, I haven’t sat an exam or had to go through the stress.

“When there was this uncertainty of exams not happening, it became me working hard not to just pass exams but because you start to really love the subject.”

“The results may have been predicted by the teachers but they were predicted on the hard work of our students.”