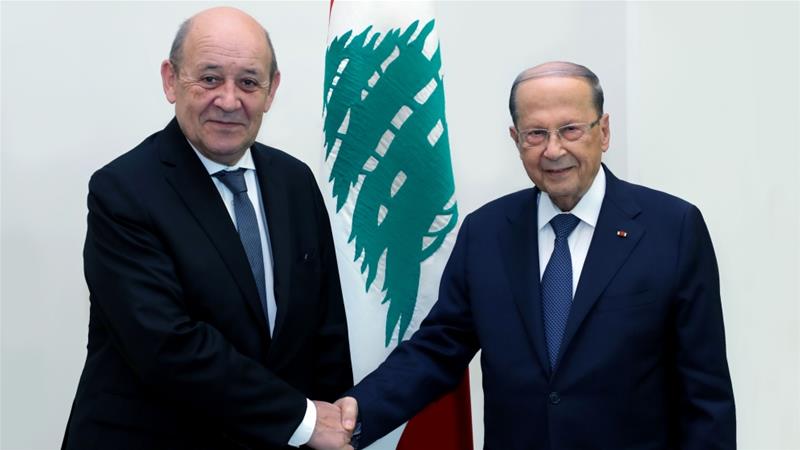 Beirut – French Foreign Minister Jean-Yves Le Drian has said Lebanese politicians are preventing the disbursal of much-needed aid to the crisis-hit country by failing to implement solutions “that have already been known for a long time”.

“France is ready to fully mobilise alongside Lebanon and to mobilise all of its partners, but this requires serious and credible reform measures to be implemented. Concrete actions are long-overdue,” Le Drian said during a joint news conference with Lebanese Foreign Minister Nassif Hitti on Thursday.

In Beirut on a two-day official visit, Le Drian likened potential French and international aid to Lebanon to divine intervention.

The international community has over the last 20 years pledged nearly $24bn to Lebanon for economic aid and development projects at four donor conferences.

The most recent conference in 2018 saw pledges of $11bn, conditional on reforms to the country’s ailing electricity sector, modernising laws and reducing the country’s public debt.

Little progress was made and Lebanon is now sinking into a deep crisis characterised by currency depreciation, steep inflation, rising poverty, unemployment and growing instability.

The government of Prime Minister Hassan Diab, appointed by the country’s establishment after a massive anti-government uprising toppled his predecessor in October, is seeking some $20bn in aid – half from the International Monetary Fund and half from international donors rallied by France.

But the government has faltered with little popular support and negotiations with the IMF have been impeded by disagreements and political bickering.

Protesters “took to the streets to mark the thirst for change, to mark the desire for transparency, the fight against corruption, and better governance of a whole people. Unfortunately, this appeal has so far not been heard,” Le Drian said.

‘No Alternative to the IMF’

Topping the list of France’s demands – which Le Drian noted “are primarily those of the Lebanese” – are four measures: The resumption negotiations with the International Monetary Fund – put on hold earlier this month due to a lack of unity on the Lebanese side; an audit of the Central Bank’s accounts; a law organising capital controls and reform to the country’s crippled electricity sector, which has bled some $47bn since the early 1990s.

“Let’s not kid ourselves, there is no alternative to an IMF program to enable Lebanon to emerge from the crisis,” he said.

“I am also thinking of the reform of the electricity sector, which is an emblematic project. I want to say it clearly, what has been done so far in this area is hardly encouraging.”

“What has to be done is clear – there is nothing to add to [Le Drian’s] words,” French diplomat Pierre Duquesne, who oversaw the 2018 CEDRE donor conference, told Al Jazeera.

Similar words were echoed by French Ambassador Bruno Foucher in a tweet: “France will act if Lebanon acts! There is nothing more to say.”

A source close to Diab told Al Jazeera the prime minister had asked Le Drian for France’s help with IMF negotiations and with revamping the electricity sector.

Diab noted a number of reforms by the government, including steps to combat cross-border smuggling with Syria with the installation of scanners, and cabinet’s approval earlier this week of a forensic audit for the central bank’s accounts.

He also raised the issue of the presence of more than one million Syrian refugees in Lebanon. Lebanon’s cabinet recently endorsed a plan to return Syrian refugees to Syria. A number of prominent politicians have long blamed their presence for many of the country’s issues, despite most of those issues pre-existing the influx of refugees in 2011.

Far from carrying a credit line or new aid package, Le Drian announced that humanitarian assistance to Lebanon would amount to 50 million euros ($58m) for the year 2020, including support for public services like healthcare. But it was up to Lebanese authorities “to put in place social safety nets … which do not yet exist”.

He said France would also roll out support to families of 1,000 children who study at 52 French-speaking schools in the country. Private schools in Lebanon are facing a severe crisis as the economic collapse pushes families to enrol their children in cheaper public schools.

France’s top diplomat also promised to continue aid to the Lebanese Army, “the backbone of this state, and the security forces as a whole, which play a crucial role in ensuring the stability and security of the country.”