France’s economy contracted by a record 13.8 percent in the second quarter under the impact of coronavirus lockdowns.

More than 17.2 million people around the world have been diagnosed with the new coronavirus. More than 10 million patients have recovered, and at least 673,000 have died, according to data from Johns Hopkins University.

09:32 GMT – There is no ‘zero risk’ in easing travel restrictions, WHO says

There is no “zero risk” strategy for countries easing international travel restrictions during the pandemic, and essential travel for emergencies should remain the priority, the World Health Organization (WHO) said.

In a long-awaited update to its guidance on travel, the United Nations global health agency said cross-border trips for emergencies, humanitarian work, the transfer of essential personnel and repatriation would constitute essential travel.

“There is no ‘zero risk’ when considering the potential importation or exportation of cases in the context of international travel,” it said in the updated guidance posted on its website.

A surge of new infections in many parts of the world has prompted some countries to reintroduce some travel restrictions, including testing and quarantining incoming passengers. 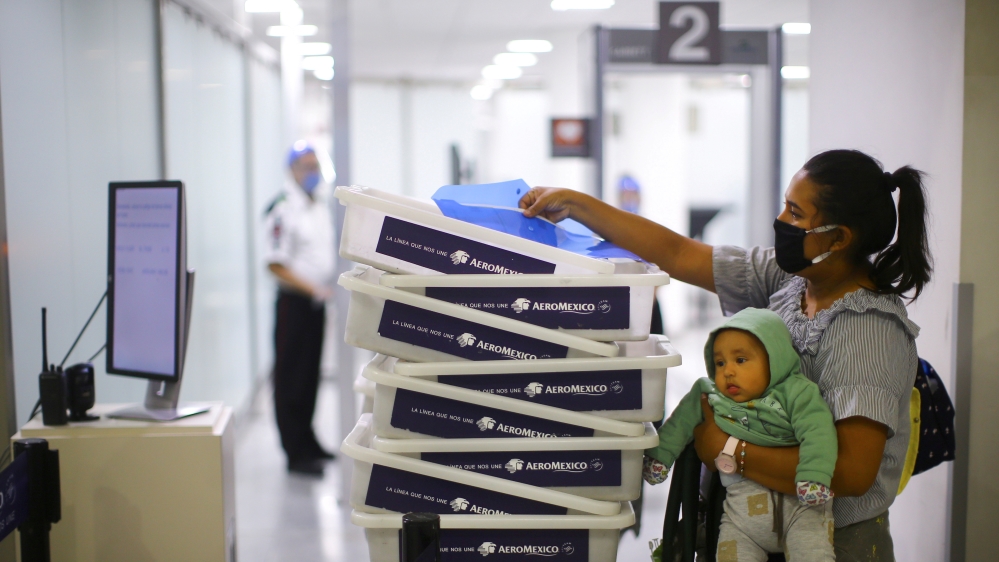 Poland reported its highest number of new daily cases since the pandemic started for the second day in a row, with 657 new cases, according to the Health Ministry.

The ministry reported seven new deaths, with a total of 45,688 reported coronavirus cases and 1,716 deaths.

Of the new cases, 227 were in the Silesia region, which has been grappling with an outbreak amongst miners.

In a bulletin, the ministry said total confirmed infections have risen to 93,354, while deaths increased by 40 to 2,023.

The three regions are Catalonia, Aragon and Navarre in northern Spain, RKI said.

The summer holiday season has prompted fears that tourists returning from destinations experiencing a surge in new cases like Spain could sow the seeds of a second wave.

On Monday, Germany said it would make coronavirus tests mandatory at airports for all returning holidaymakers from high-risk areas.

Hong Kong reported 121 new cases, including 118 that were locally transmitted, as authorities said the global financial hub faced a critical period to battle a third wave of the virus which has seen a resurgence this month.

The Chinese territory reported a daily record of 149 new cases on Thursday. Since late January, over 3,100 people have been infected in Hong Kong, 27 of whom have died.

This brought Indonesia’s total number of confirmed infections to 108,376 and deaths to 5,131. 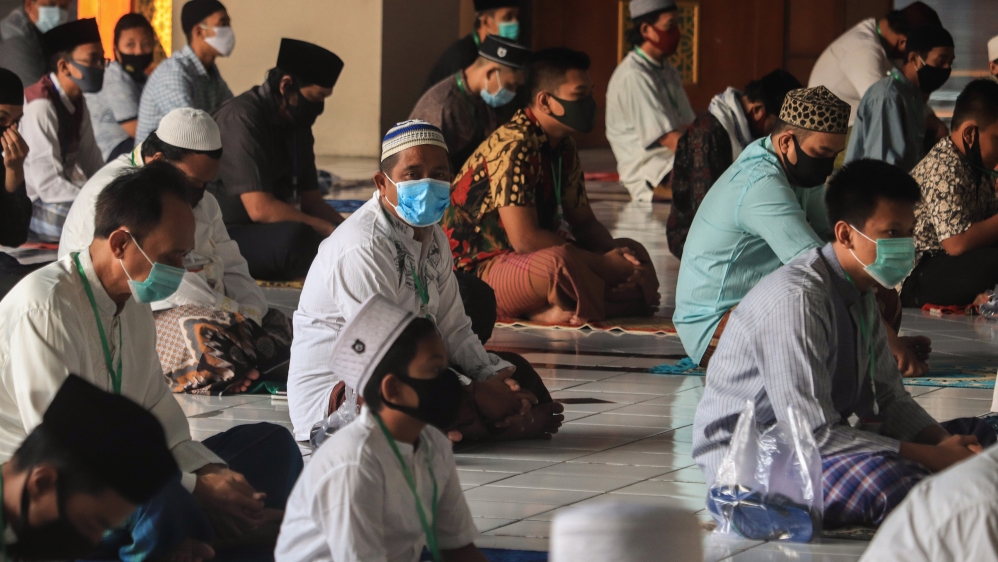 GDP fell by 17.3 percent compared with the year-ago second quarter, Istat said, as the coronavirus lockdown took a dramatic toll on the eurozone’s third-largest economy.

Vietnam confirmed its first coronavirus fatality, state media reported, after the death of an elderly man who had tested positive in Danang, the city where the virus re-emerged in the country last week after 100 days.

Vietnam is battling a new outbreak of the virus following months of successful countermeasures which saw the country keep its coronavirus tally to just a few hundred cases.

Authorities on Friday reported 45 new coronavirus cases, marking the biggest daily jump in the country, bringing the total cases in the country to 509. 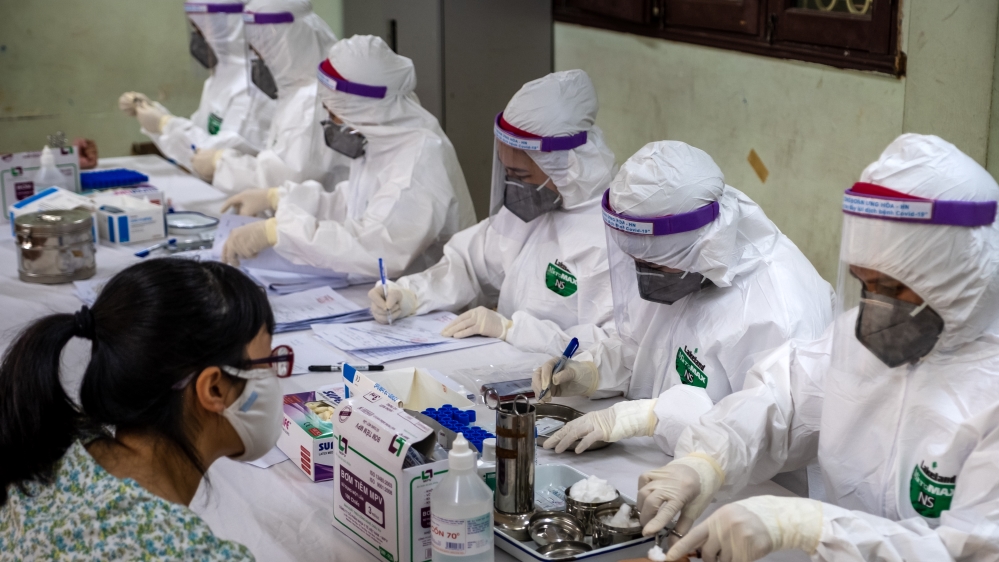 Officials said 161 people had died in the last 24 hours, bringing the official death toll to 13,963.

France’s economy contracted by a record 13.8 percent in the second quarter under the impact of coronavirus lockdowns, the national statistics institute INSEE said.

The seasonally-adjusted quarter-on-quarter drop in gross domestic product (GDP) was better than forecast but worse than the performance of most of its eurozone peers.

“GDP’s negative developments in first half of 2020 is linked to the shut-down of ‘non-essential’ activities in the context of the implementation of the lockdown between mid-March and the beginning of May,” INSEE said in a statement.

INSEE also updated the figure for the first quarter to a 5.9 percent contraction, from the 5.3 percent it had previously estimated.

The second quarter figure means the French economy has been shrinking for three consecutive quarters and continues to be in recession. 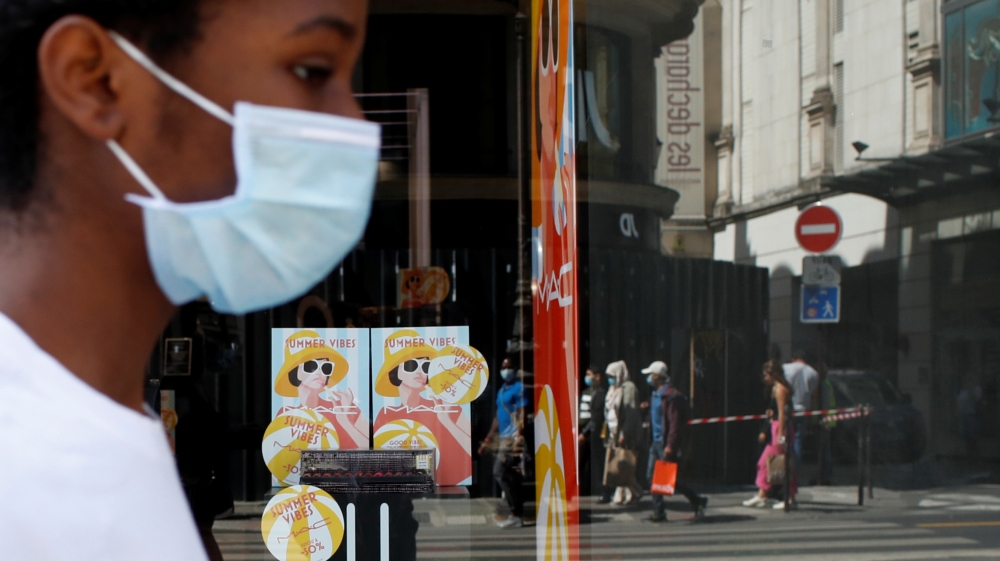 Germany reported 870 new cases, according to a tally from the Robert Koch Institute for infectious diseases.

Fiji announced its first coronavirus death but health officials assured people in the Pacific island nation that it was not the precursor to a major outbreak.

Health Minister Ifereimi Waqainabete said the victim was a 66-year-old man who tested positive after returning from India, where he had undergone surgery for a long-standing heart condition.

“Sadly, despite the best efforts of our health-care professionals, this gentleman passed away yesterday in the isolation ward at Lautoka hospital due to complications from COVID-19,” Waqainabete told reporters.

He said the man was one of nine active cases who had been held in quarantine since they were repatriated from India on July 1.

Before then, Fiji had enjoyed a spell of four weeks virus-free, after the 18 cases it had previously recorded all recovered.

Indonesia’s resort island of Bali has reopened to domestic tourists after an almost four-month lockdown for the coronavirus pandemic.

Under the easing that took effect on Friday, Indonesians visiting Bali will face stringent rules at hotels, restaurants and beaches. Foreign tourists will be allowed on the island beginning September 11.

Philippine President Rodrigo Duterte extended quarantine restrictions in the capital Manila, limiting movements of the elderly and children, and the operations of businesses from restaurants to gyms, until mid-August.

“My plea is to endure some more. Many have been infected,” Duterte said in a televised address.

Duterte promised free vaccines if they became available by late this year, prioritising first the poor and then the middle class, police and military personnel. The Philippines will be given precedence by China in vaccine distribution, he said. 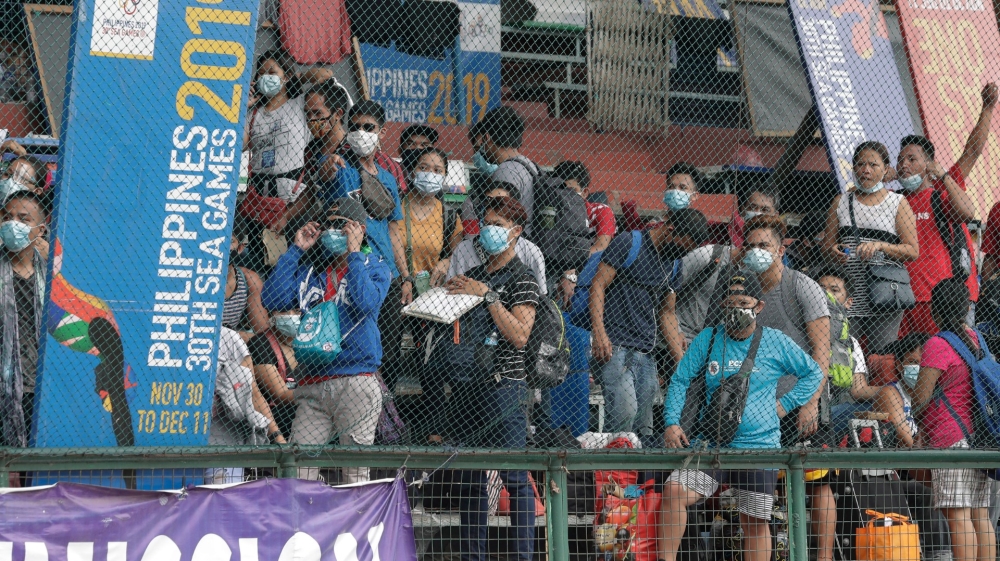 Australia’s Victoria state recorded its second-highest day of new coronavirus infections, as the state’s Premier Daniel Andrews flagged the prospect of more rigorous steps to contain the spread of the disease.

“It is clear to all of us that these numbers are still far too high,” Andrews told reporters. “It may well be the case … that we need to take further steps. The data will tell us, the experts will tell us, what and if any next steps need to be.”

Amid the rise in cases, authorities reversed a ban on indoor dining, along restaurants to operate under limited hours and with limited capacity. Businesses such as bars, karaoke bars and amusement parks remain temporarily closed, and public gatherings are restricted to two people. 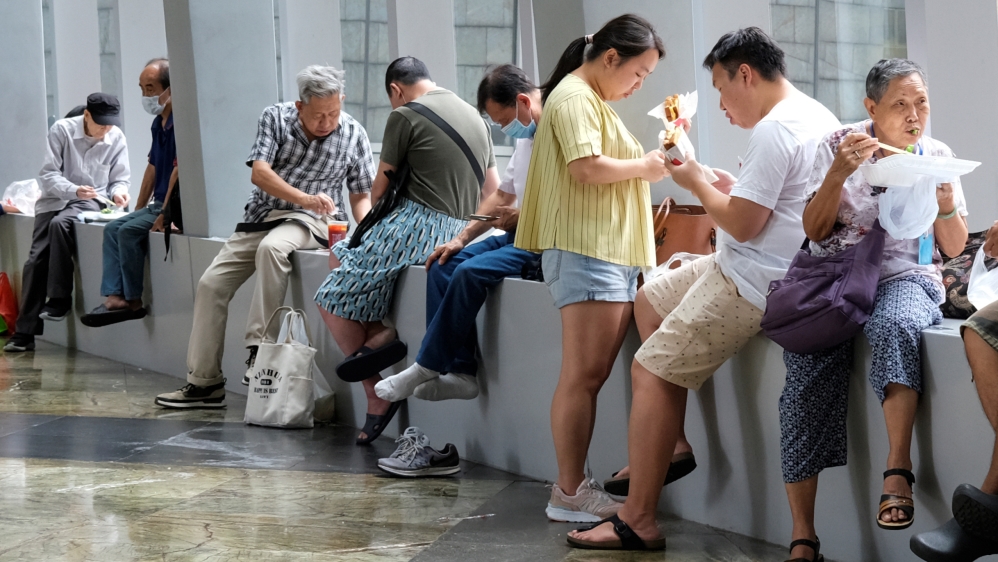 China tightened travel restrictions in Urumqi, the capital of Xinjiang province, requiring people arriving in the city from regions deemed to have high infection risks to undergo a two-week quarantine.

Others arriving from less risky areas must show proof of good health. Locals “in principle” must stay in the city or show proof of health to be allowed to leave.

Since mid-July, the Xinjiang outbreak centred in Urumqi has seen more than 600 cases of illness, including 112 new ones reported on Friday.

Brazil’s first lady Michelle Bolsonaro tested positive for the new coronavirus, the government announced on Thursday, five days after her husband Jair Bolsonaro said he had recovered from his COVID-19 infection.

The 38-year-old first lady “is in good health and will follow all established protocols”, the president’s office said. 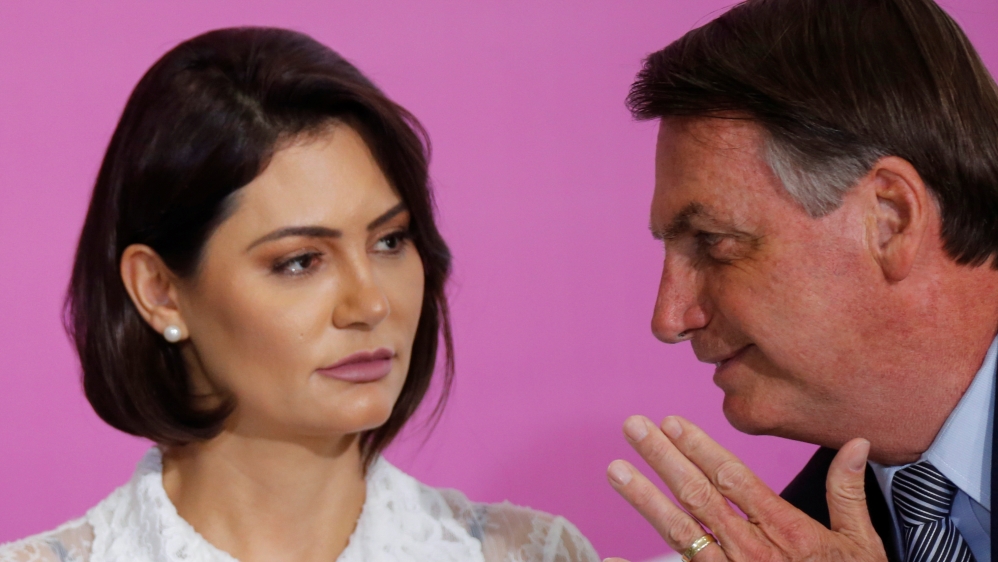 China’s factory activity expanded in July for the fifth month in a row and at a faster pace, beating analyst expectations despite disruptions from floods and a resurgence in coronavirus cases around the world.

Analysts had expected it to slow to 50.7. The 50-point mark separates growth from contraction on a monthly basis.

Long lines formed outside Pension Fund Administrators offices in Chile’s capital, Santiago, and the websites of several fund managers collapsed as Chileans sought to take advantage of a new law allowing citizens to tap into retirement savings amid the coronavirus pandemic.

The emergency measure, which came into effect on Thursday, allows those with savings to withdraw up to 10 percent of their pensions.

In a statement, Chile’s superintendent of pensions said 3,024,347 people had asked to withdraw their share by 5pm local time.

Opinion polls indicate nearly nine out of every 10 Chileans planned to tap their funds, with most saying they would use the money to pay for basic goods and services. 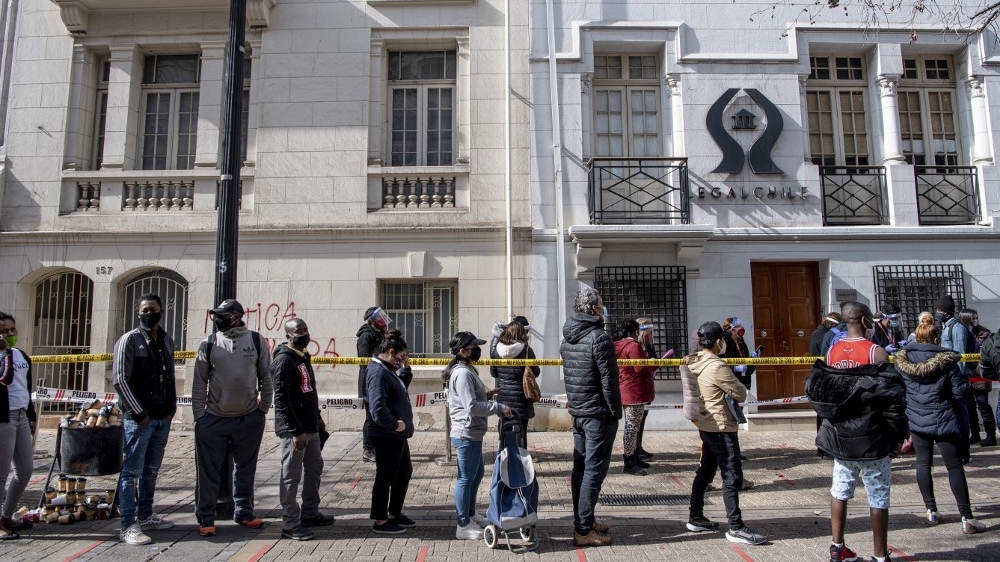 01:53 GMT – US epicentre of pandemic shifts towards Midwest

Coronavirus infections appear to be picking up in the Midwestern United States, the coordinator of the White House Coronavirus Task Force said, as the state of Ohio reported a record day of cases and Wisconsin’s governor mandated the use of masks.

The coronavirus outbreak is “moving up” into Ohio, Kentucky, Tennessee, Missouri, Kansas and Nebraska from the south “because of vacations and other reasons of travel”, Deborah Birx told Fox News.

Iran’s government ignored repeated requests from senior prison officials for help in containing coronavirus in the country’s overcrowded jails, according to Amnesty International.

The rights group said it reviewed copies of four letters to the health ministry signed by officials at Iran’s Prisons Organization, “raising the alarm over serious shortages of protective equipment, disinfectant products, and essential medical devices”.

Brazilian President Jair Bolsonaro said he was taking antibiotics for an infection that left him feeling weak, chuckling in an online video about “mould” in his lungs, having spent weeks in isolation after catching the new coronavirus.

“I just did a blood test. I was feeling kind of weak yesterday. They found a bit of infection also. Now I’m on antibiotics,” Bolsonaro said in a livestream video, without elaborating on the infection.

“After 20 days indoors, I have other problems. I have mould in my lungs,” he said, referring to nearly three weeks he spent at the official presidential residence.

He tested positive for the coronavirus on July 7 and then negative last Saturday.

Botswana’s capital city Gaborone has returned to a two-week lockdown to stem its latest surge in coronavirus infections.

Under new rules for the capital and surrounding areas, only essential workers would be able to leave home for work, with others only able to leave the house to buy groceries. All gatherings will be banned and hotels, restaurants, gyms and schools will close.

“During the course of the week, the disease has taken an unprecedented turn, which now required we place the greater Gaborone region under lockdown to enable our containment measures to take hold,” Kereng Masupu, coordinator of the COVID-19 task force team, said in a televised briefing.

You can find all the key developments from yesterday, July 30, here.