Savvy cooks across the globe know that one of the easiest ways to add verve to their cooking is to keep a selection of aromatic spice blends at the ready. From Chinese five spice to Cajun seasoning, from Indian masalas to Chilean merken, spice blends are the cornerstones of so many cuisines, with very good reason.

Used by the pinch or by the cupful, a harmonious spice blend can deepen and round out the flavors of almost any dish, instantly adding color, perfume and, sometimes, a stinging kick. And unlike individual spices, the beauty of a blend is in its efficiency. With all the spices carefully measured and mixed ahead of time, cooks don’t need to stop and wing it when the chicken’s in the pan.

Lior Lev Sercarz, the founder of La Boîte, a New York-based spice shop, built his business on the idea that having fresh, well-made spice blends on hand will drastically improve anyone’s cooking.

“If you have 15 single spices in your cabinet, how do you decide which to grab when you’re in the middle of cooking dinner? Then the last thing you’re going to want to do is start toasting and pounding,” he said. “In a blend, that’s all done in advance.” 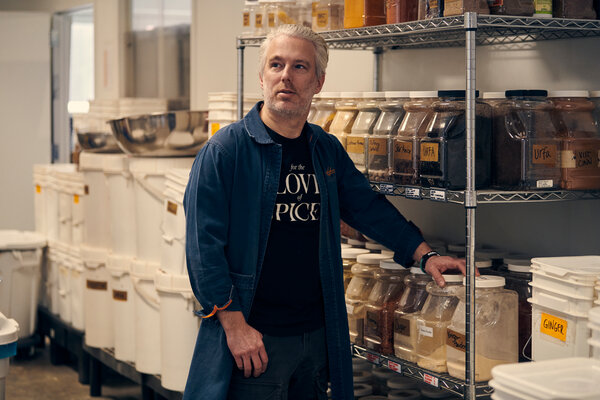 Of course, you can buy high-quality spice blends, but you may get even better flavors if you make them yourself. A good place to begin is with any of these five versatile, beloved blends: garam masala, baharat, za’atar, five spice and a sweet baking blend along the lines of pumpkin pie spice. Many of them are elemental to the cuisines they come from, and you probably already have some, or all, in your spice cabinet. Whether you use them in traditional contexts or otherwise, these seasoning mixes will make whatever you cook shine.

Once you get into the groove of toasting, grinding and mixing, creating your own blends can be its own mediative reward, and highly gratifying to the senses.

And don’t limit yourself. If you’re new to spice blending, you may want to make these mixes once according to the recipes to familiarize yourself, then change them up to suit your tastes. Licorice despisers can reduce or leave out the fennel seeds and anise; heat seekers can shovel in more pepper or add chile powder.

Cooks should feel free to bring a certain measure of their own personality and preferences to the blending process, said Ethan Frisch, who founded Burlap & Barrel, an importer and online spice shop, with his business partner Ori Zohar in 2016.

“There’s a sense of orthodoxy in blending that really shouldn’t exist,” Mr. Frisch said. “Spice blends have always reflected the person blending them.”

Once ground, spices blends (and single spices) will last for six months to a year when properly stored away from light and heat — ideally not in a drawer or cabinet right next to your stove. Just make sure to date everything, then steel yourself to throw out spices once their time is up. It may feel wantonly wasteful, but you’re not doing your cooking any favors by stirring in spices that have lost their oomph.

“People forget that spices are like any other agricultural crop,” Mr. Frisch said, “like coffee beans, like wine grapes; the terroir and skill in farming really matter. And so does freshness.”

Historically, though, tracking down fresh, high-quality spices has been tricky in the United States.

According to Sana Javeri Kadri, the founder of Diaspora Company, a spice importer and purveyor, spices may have passed through several hands and be years old before they reach the consumer (a vestige of an abusive, colonially derived spice-trade system). This is changing, as more companies like hers — along with Burlap & Barrel and several others — look to upend that system and focus on carefully grown spices bought directly from small farmers at fair prices.

Whether you’re buying from a fair-trade importer or your local supermarket, it pays to ask questions and read labels if you can, or at least seek out a shop with high turnover.

After gathering the best whole spices you can find, you’ll need a small skillet or baking pan for toasting them, and a mortar and pestle or an electric spice grinder for pulverizing. A coffee grinder will also work, preferably one you’ve reserved for spices, so your baharat doesn’t take on espresso undertones. And while you don’t need a gram scale, if you have one, it will be more precise than using volume measurements, especially for irregularly shaped, bulky spices like star anise.

Once you have a few blends tucked away, use them liberally and often — and not just in traditional dishes.

“It can be very liberating to experiment,” said Mr. Sercarz, who routinely sprinkles the likes of garam masala into cookies, and berbere, an Ethiopian spice blend, onto pizza.

“The act of blending spices is an art,” he said, “and so is cooking with them.”

At once musky and sweet, with a pronounced kick, five spice is traditionally made from equal parts cinnamon, cloves, fennel seeds, star anise and peppercorns (usually Sichuan or white). But it’s not uncommon to find cooks sneaking in a little tangerine peel or ginger, depending on where they live and what they’re planning to prepare, said Kian Lam Kho, the author of “Phoenix Claws and Jade Trees: Essential Techniques of Authentic Chinese Cooking” (Clarkson Potter, 2015).

His version hews to the traditional five ingredients, and uses Sichuan peppercorns to give the mix a characteristically numbing, tingly sensation on the tongue known as mala. Because Sichuan peppercorns vary a lot in quality, he recommends ordering from a good source, like the Mala Market, one of the few companies importing untreated peppercorns direct from growers.

Once the spices are toasted and mixed, the blend can be used both whole (simmered into stews, braises and soups) and ground (added to roasted meats like duck, lamb and pork belly, vegetables and seafood). Ground five spice is also often served mixed with salt and used as a piquant condiment to accompany barbecue dishes.

In Arabic, the term “baharat” simply means “spices,” and can refer to any number of different blends, each tailored to a specific dish or ingredients.

“There’s a baharat for everything, and it varies a lot in different regions,” said Freda Nokaly, a founder, with Doaa Elkady, of Spice Tree Organics, a spice-blending company based in Queens, N.Y.

Their blend (called buharat, an alternate spelling) reflects their Egyptian ancestry, highlighting a combination of musky cumin and floral, citrusy coriander that’s been sweetened with cinnamon, cardamom and clove, and spiked with black pepper and bay leaf.

Unlike some other baharat mixes, Ms. Nokaly and Ms. Elkady’s version doesn’t call for toasting the spices first, which gives their blend a subtle but distinct brightness. Use it in meatballs and pilafs, in marinade and sauces for grilled meats and fish, and in the traditional layered rice dish called maqluba.

In India, just about every home has its own recipe for garam masala, which is the most common spice blend in the country and a cornerstone of cuisines all over South Asia, where it’s used in curries, rice dishes and dals, and with vegetables, meats and fish. This version is adapted from Floyd Cardoz, the pioneering Indian chef who opened Tabla and Bombay Bread Bar in New York City, and who died of the coronavirus in March 2020.

His wife, Barkha Cardoz, said that Mr. Cardoz’s blend was intentionally on the minimalist and sweeter side compared with other traditional mixes, making it very versatile.

“My grandmother would use 15 spices and grind enough for the whole the family,” she said. “Then Floyd became the grandmother. He started making garam masala for everyone with just a few spices so you can use it everywhere, in curries of course, and I’ve used it to make apple pie and Christmas cake.”

Za’atar is the name for both a traditional Middle Eastern seasoning blend and the pungent green herb that gives the blend its intense, savory character. The hardy herb, which grows wild, tastes like a combination of oregano, marjoram, summer savory and thyme — all of which can be used as substitutes if dried za’atar isn’t available. As with all spice blends, recipes vary widely depending on the region and the cook, but most include ground sumac berries for acidity, toasted sesame seeds for their rich, earthy notes, and a little salt.

This version, adapted from Mr. Sercarz of La Boîte, plays it fairly classic, but don’t let that stop you from experimenting. “Adding nigella seeds or rosemary isn’t traditional, but it’s a fun twist,” he said.

Za’atar can be used in marinades for grilled or roasted poultry or meats, mixed into dips, salads and egg dishes, or set on the table to be added on as a bright, herbaceous condiment.

Whether it’s a pumpkin pie spice, German lebkuchengewurz or the British mixed spice, a sweet baking spice blend predominantly flavored with warming, fragrant notes of cinnamon, allspice, and nutmeg or mace is a staple in American and European culinary culture.

This version adds a jolt of white pepper for heat, along with the deep perfume of cardamom. You can use a teaspoon or two in pies (apple, pumpkin and beyond), fruit and nut cakes and tortes, and all manner of cookies (especially shortbread). Or knead some into sweet breads like challah and brioche. Smaller amounts are wonderful on hot chocolate and rice pudding, and the blend will add depth to homemade ice cream when steeped in the custard before freezing.