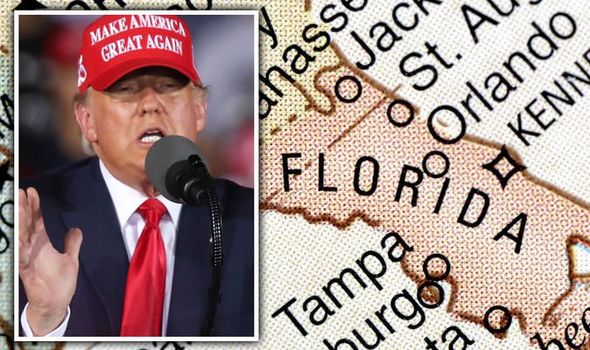 The race to become the next President of the US is on, and Donald Trump and Joe Biden are eagerly awaiting results from key states. The Sunshine State has participated in every presidential election expect from 1864, during the American Civil War. What’s special about Florida is how the result from the state has been tied to the winning presidential candidate. Florida has backed the winning candidate in every election since 1996, and has only backed the losing candidate twice since 1928.

The polls had shown a tight race between the two candidates, with Mr Trump receiving 51.2 percent of the vote from the state, while Mr Biden has 47.8 percent.

Mr Trump and the Republican Party has now been declared the winner of the state.

Punters had already backed the incumbent to win the vote in Florida.

Florida is one of the powerhouses with 29 electoral votes.

To win, a presidential candidate needs 270 or more votes to be the clear winner.

Mr Trump won Florida in the 2016 election and is now crucial to his chances of a second term in the White House.

Back then, the Florida result was the first sign Democrat Hillary Clinton was in trouble on election night.

In two of the last three Democratic defeats, winning Florida would have meant taking the White House.