Hottest spot was Myerscough, Lancs. Its 78.6F (25.9C) took the record from Bank Holiday Monday’s 77.1F in Kinlochewe, northwest Scotland. Bookmakers have cut the odds of “Flaming June” setting records. Forecasters say that while today may see parts of southern England soar to 84F (29C) – warmer than much of the Continent – strong thunderstorms are possible too, before conditions stay balmy this week. Millions of families continued to bake on their half-term break yesterday, although seaside resorts were not quite as crowded as Monday following a reluctant return to work by many. Sunseekers on Bournemouth beach made the most of the heatwave, splashing in the sea and joining long queues at ice-cream sellers and for fish and chips, as visitors travelled from as far as Birmingham and Manchester.

Cara Candy gave her 10-month-old daughter a seaside day out, saying: “It’s her first time at the beach and I’m so glad the weather is so lovely.”

Dog walker Michael Baxter said: “The weather is so good it seemed almost like a crime not to take advantage of it.”

While Mark Blennerhassett from Weymouth added: “People have come to the beach because they have been locked up for so long and it is beautiful weather. My plan for the day is to just relax.”

Martin Collinge, from Birmingham, was visiting with his wife and in-laws.

He said: “We have come down for the sun and the sea. We’ve enjoyed our trip so far and the weather helps.”

Local council leader Drew Mellor said the sunny weather was a huge boost to the tourism-dependent area, which suffered during the lockdowns. 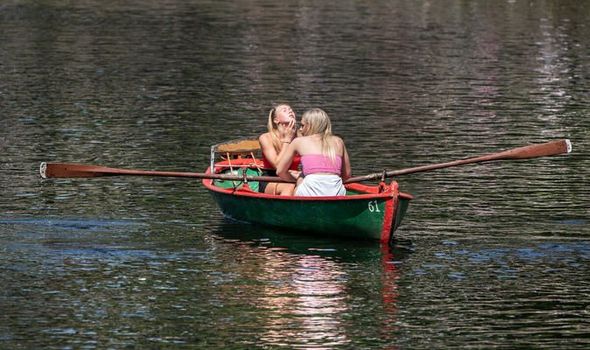 He said: “It was a hugely successful bank holiday, all our hotels were full, people had a fabulous time. It’s the start of what we hope will be our busiest summer ever.

“Our hospitality sector needs the support of the UK’s staycationers and there is no better place to base yourself than Bournemouth, Christchurch and Poole.” The Met Office say temperatures are likely to peak today, with some thunderstorms arriving this morning although there will still be sunshine for the rest of the week.

A spokesman said: “There are heavy thundery showers at various times this week…one pushing through south England and Wales as we go through Wednesday morning.

“Because of the time of year, a lot of people have travelled down to these parts; there’s a likelihood of an increased impact because of the higher number of people.”

BBC meteorologist Louise Lear said: “Things will dip down to highteens after that rain clears.” 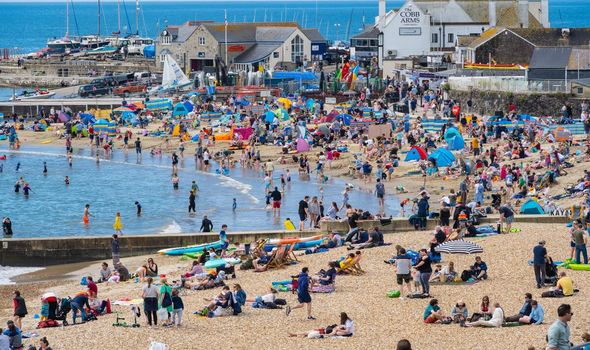 The heatwave brought calls for people to check on their elderly friends and neighbours.

“Too much sun or excessive heat can create new health problems for them or exacerbate existing ones, especially if they have breathing problems or a heart condition.”

She added: “Please bear that in mind yourself and for others around you.” Bookmakers cut the odds of this month being a record-breaker to 7/4.

Alex Apati, of Ladbrokes, said: “It looks like the British weather has finally taken a turn for the better, with a record-breaking hot June potentially on the way.” May was the fourth wettest on record for the UK and the wettest ever for Wales.