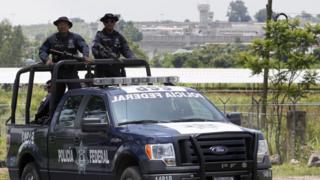 Moisés Escamilla May, a notorious Mexican gang leader, has died in prison after contracting coronavirus.

Escamilla, 45, was the leader of a group part of the feared criminal cartel Los Zetas.

He was serving a 37-year sentence for organised crime, including his role in the decapitation of 12 people in Yucatán.

More than 3,450 have died with Covid-19 in Mexico, according to a tally by Johns Hopkins University.

Who was Moisés Escamilla?

Moisés Escamilla May, also known as Gordo May (Fat May), led a group calling itself “Old School Zetas”, which formed part of the Los Zetas criminal cartel.

He was the main supplier of cocaine in Cancún, smuggling it via maritime routes from Central America into the popular beach resort.

He also ran a network of informants which included members of the local police force.

When he was arrested in 2008 along with eight of his men, his group was considered the strongest criminal organisation in the Cancún area.

He was viewed as a highly dangerous inmate and when he died was being held at the Puente Grande maximum security prison in Jalisco state.

He developed respiratory problems on 6 May and died two days later, but authorities only made his death public on Sunday.

How badly hit is Mexico by coronavirus?

According to the tally kept by Johns Hopkins University, Mexico has more than 35,000 confirmed cases of coronavirus and 3,465 deaths.

That figure is much lower than that of its northern neighbour, the US, which has the highest number of confirmed infections anywhere in the world at more than 1.3 million.

However, many in Mexico fear that a low level of testing means the true number of cases could be much higher.

What’s the situation in prisons?

The United Nations has warned that prisons in Latin America, which are often overcrowded, could become hotbeds of coronavirus as it is impossible for inmates to socially distance.

There have been deadly prison riots in Venezuela, Peru and Colombia – with inmates demanding more be done to shield them from the virus.

An amnesty law passed in Mexico to allow some inmates to go free and ease overcrowding in prisons during the pandemic has been criticised by activists as not being far reaching enough to make a difference.