Dr. Anthony S. Fauci, the top infectious disease expert in the United States, predicted on Thursday that the daily death toll from the coronavirus would continue to rise for weeks to come, and counseled patience with the vaccination program gearing up across the nation.

Health officials in the United States reported nearly 4,000 virus-related deaths on Wednesday, a record, and the total for the pandemic surpassed 360,000. In an interview with NPR, Dr. Fauci said the continued high toll would probably be a reflection of increased travel and gatherings over the holidays.

“We believe things will get worse as we get into January,” he said.

He stressed that it was still possible to “blunt that acceleration” by strictly adhering to public health measures like social distancing and mask-wearing.

“Now’s not the time to pull back on this,” he warned.

The virus has exacted a punishing toll across the United States. In recent days, Wyoming and Arizona been among states that have recorded high per capita rates of virus deaths, according to a New York Times database. On Thursday, Florida reported more than 19,800 cases, the state’s highest single-day total.

Dr. Fauci advised Americans to be patient with the snags and delays that have slowed the vaccination effort and provoked widespread frustration.

So far, at least 5.3 million people in the United States have received a dose of one of the two Covid-19 vaccines that have been authorized for use so far, according to the Centers for Disease Control and Prevention. That figure is far short of the goal federal officials had set to give at least 20 million people their first shots by the end of December.

Dr. Francis S. Collins, the head of the National Institutes of Health, said Wednesday he was “not totally surprised” that vaccine distribution had gotten off to a “rocky” start.

“We had this remarkable plan that Warp Speed had put in place to have doses ready to go the very next day after the F.D.A. approval, but that’s a lot of logistics,” he told The Washington Post, referring to Operation Warp Speed, the administration’s vaccine development program. “So maybe we shouldn’t be too shocked that it didn’t go like clockwork.”

He also echoed Dr. Fauci’s warning, and said “the next couple of weeks are going to be really critical.”

But the rollout is beginning to accelerate. More people received their initial shots in the third week of the vaccine drive than in the first two weeks combined, and the C.D.C.’s count rose by 470,000 between Tuesday and Wednesday.

In a letter on Thursday to Alex M. Azar II, the secretary of health and human services, the American Hospital Association called on the federal government to do more to coordinate what is being done in different states and municipalities.

“Hospitals are committed to be a central part of the vaccination effort, but hospitals alone cannot do it, especially as we care for burgeoning numbers of critically ill Covid-19 patients, and struggle to maintain sufficient staffing work to have enough personal protective equipment and other resources,” Richard J. Pollack, chief executive of the association, wrote in the letter. 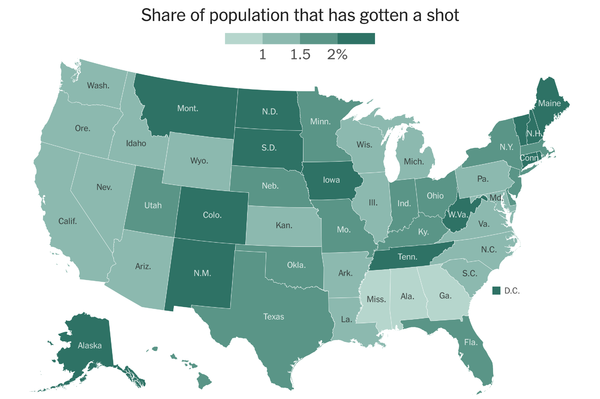 About 5.3 Million People in the U.S. Have Gotten a Covid-19 Vaccine

The government says it has distributed about 17.2 million doses of Covid-19 vaccines to states and other jurisdictions. See where the shots have gone.

Mr. Azar urged the states on Wednesday not to stick too rigidly to the C.D.C.’s guidelines on whom to vaccinate in what order.

“There is no reason that states need to complete, say, vaccinating all health care providers before opening up vaccinations to older Americans or other especially vulnerable populations,” Mr. Azar said at a news conference. He added that, “It would be much better to move quickly and end up vaccinating some lower-priority people than to let vaccines sit around.”

In the NPR interview, Dr. Fauci said that any program on so large a scale would have to overcome stumbling blocks, and that the timing of the rollout, which began around the December holidays, may have added to the delays.

“I think it would be fair to just observe what happens in the next couple of weeks,” he said. “If we don’t catch up on what the original goal was, then we really need to make some changes about what we’re doing.”