A couple opened Potchke, a pop-up in Knoxville, to showcase their love of the war-ravaged country and its cooking.

A bowl of matzo ball soup at the pop-up deli Potchke, surrounded by photos taken on the trip to Ukraine that inspired the restaurant’s food. Credit…Shawn Poynter for The New York Times

KNOXVILLE, Tenn. — When Russia invaded Ukraine, Laurence Faber and Emily Williams’s first reaction was to cook borscht. Ukrainian flags had yet to spread across the American lawn-scape, and Potchke, the couple’s Ukrainian-inspired deli, had yet to open in this eastern Tennessee city.

They cooked the soup in response to the horror overtaking the peaceful country they’d fallen in love with last summer and fall, when they spent nearly two months in Ukraine, researching its food and Mr. Faber’s family’s history.

“We couldn’t do nothing,” Mr. Faber said. “We owe the country so much.”

Mr. Faber and Ms. Williams, partners in life and business, ended up selling the borscht at a fund-raiser three days after the war began in February, raising more than $5,000 that they sent to charities and friends in Ukraine.

The benefit doubled as the debut of Potchke, which officially opened in mid-March, the largest project yet from two promising young restaurateurs whose interest in Ukrainian cuisine predated the war and is likely to last long beyond it. 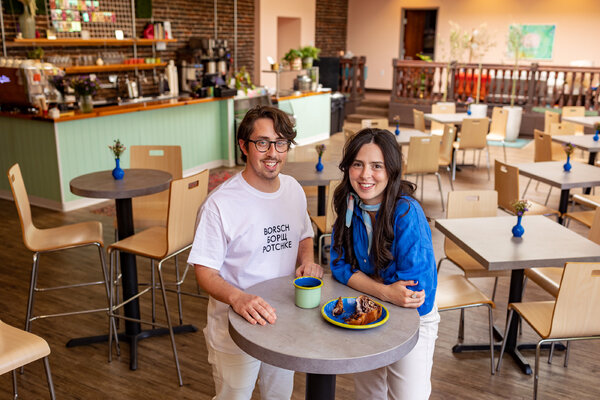 The deli is a yearlong pop-up that Ms. Williams, 27, and Mr. Faber, 30, decided to open when a space became available in the Old City neighborhood of Knoxville. The couple saw the pop-up as an ideal way to generate income as they plan a modern Ukrainian bistro inspired by their trip. (Supply-chain snags have delayed that opening until 2023. Like Potchke, the bistro will include partners Brian and Jessica Strutz, owners of A Dopo, a wood-fired pizzeria.)

Mr. Faber and Ms. Williams built a following with the babka business she started in their house after losing her restaurant service job at the start of the pandemic. Sales were brisk enough to compel Mr. Faber to quit his job as a pastry chef at Blackberry Farm, the celebrated resort near Knoxville in the Great Smoky Mountains foothills, to help with the baking.

Babkas are on Potchke’s short, frequently changing menu, along with refined versions of deli staples like blintzes and lox-topped bialys. Borscht appears on the menu as “borsch(t),” a mash-up of Yiddish and Ukrainian spellings.

Mr. Faber’s matzo ball soup, its flavors sharpened by amba (a pickled mango sauce) and Calabrian chile oil, was a hit with a group of older Jewish women who visited the deli in its early days — or at least he assumed it was, given that the customers asked him to pose for a selfie.

“Later they went up to Emily and were like, ‘We didn’t like the chile oil,’” Mr. Faber said. “I just think they didn’t want to hurt a nice Jewish boy’s feelings.”

The creative license the chef takes with the matzo ball soup is an example of his evolving approach to Ukrainian cuisine, after immersing himself in French-style pastry and Southern cooking at Blackberry Farm.

“Working at Blackberry Farm kind of told me how to tell a story about food,” Mr. Faber said. “But we wanted to tell a more personal story. That’s what took us to Ukraine.”

He and Ms. Williams plotted their trip through villages on either side of Ukraine’s border with Moldova, which was still a part of Russia in 1921, when Phyllis Faber, Mr. Faber’s great-grandmother, fled the pogroms. “She was shot by soldiers doing target practice on her house,” he said. “Crazy stuff.”

She landed in the United States in 1923. Mr. Faber learned much of what he knows about her early life from watching video interviews recorded before her death in 1995, at 91, when he was 3.

Mr. Faber and Ms. Williams intended to spend more time in Georgia and Turkey. Those plans changed when they unexpectedly found culinary inspiration in Ukraine.

Scrolling through photographs of their trip in Potchke’s dining room in late March, Ms. Williams grew animated by memories of the street musicians and the ballet company they saw rehearsing near their apartment in Odessa, the cosmopolitan Ukrainian port city. “There is so much emphasis on design and the arts,” she said.

On the ground. As the war in Ukraine approaches its 100th day, President Volodymyr Zelensky said that Russian forces now control one-fifth of the country. Though battered and depleted from their failed drive to capture the Ukrainian capital of Kyiv, Russian troops are grinding closer to their goal of taking over the eastern regions of Luhansk and Donetsk.

Grain exports. The leader of the African Union met with President Vladimir V. Putin of Russia and urged him to release much-needed grain and fertilizer that are stuck in Ukraine. Western leaders have accused Russia of holding up supplies in order to weaponize the global food supply; many countries across Africa and the Middle East have been facing alarming levels of hunger and starvation as a result of the blockade.

Military aid. The arrival of ever more sophisticated and powerful Western weapons could soon alter the dynamic on the battlefield. The United States said it will send Ukraine advanced rockets as part of a new $700 million aid package, while Germany promised a modern air-defense system.

Russian oil embargo. European Union members finally reached an agreement on a Russian oil embargo and new sanctions against Russia. The long-delayed deal effectively exempts Hungary, which had opposed the embargo, from the costly step the rest of the bloc is taking to punish Russia.

“We’ve never been so inspired by a city,” added Mr. Faber, who was particularly struck by Odessa’s deeply rooted Jewish culture. “There are still menus written in Yiddish.”

The couple eventually met Igor Mezencev, a Kharkiv chef who invited them on a cooking-and-camping trip in the Carpathian Mountains. The journey was designed by Mr. Mezencev to expose chefs from outside Ukraine to the country’s cuisine and ingredients. On the first day they cooked a deer purchased from a local farmer, and later foraged for mushrooms and berries.

“One thing I took away from it was that being in the Carpathian Mountains is a little like being in the Smoky Mountains,” Mr. Faber said.

Mr. Mezencev, 33, hasn’t left his apartment in Kharkiv, a site of intense fighting. In recent Instagram messages, he said he was mourning the death of his French bulldog, Yosik, while working on a business plan to feed hungry people from food trucks.

“Everything seems to be fine,” he wrote, “but relative to wartime.”

Mr. Mezencev solidified the couple’s desire to open a Ukrainian restaurant in Knoxville, they said. Their worry over his and other friends’ safety has fueled their charity work since they opened Potchke.

The warm reception to their deli has made them consider operating it longer than a year. For now, it’s where they’re mapping out a future inspired by a country they never expected to descend into war.