The United Nations has called for an immediate ceasefire in Ethiopia, as it expects 200,000 refugees to escape to Sudan in the coming months.

With more than one million refugees already in Sudan, the east African country is struggling to cope with about 31,000 Ethiopian refugees who have already entered since fighting erupted on 4 November.

United Nations aid agencies called on Friday for an immediate ceasefire so humanitarian corridors can be set up to enable access to civilians. A total of 200,000 Ethiopians are expected over the next six months, Babar Baloch, spokesman for the UN High Commissioner for Refugees (UNHCR) said.

The violence started when Ethiopia’s Nobel Prize-winning prime minister, Abiy Ahmed, ordered government forces to respond to an alleged raid on an army camp in the northern Tigray region on 4 November.

Tigray’s main party, which ruled the country as part of a coalition for three decades until 2018, reacted by taking control of parts of the army in that region and fighting back.

Hundreds, possibly thousands, have died in the two weeks since the fighting started, with many people fleeing their homes due to violence or the fear of violence.

Will Carter, country director for the Norwegian Refugee Council (NRC) in Sudan, is on the border with Ethiopia, where people are arriving injured and highly distressed. 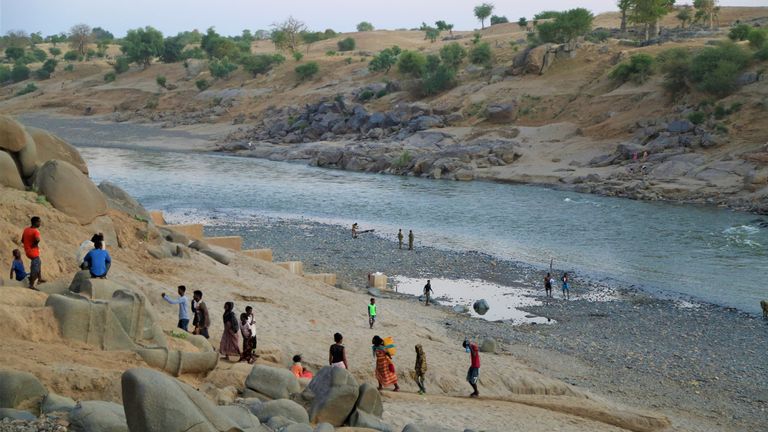 Sudan reopened the Um Raquba camp last week 20 years after it closed, after hosting thousands of Ethiopians from 1983-84 as the country dealt with its worst famine of the 20th century.

Mr Carter described seeing pregnant women, separated families and sick elderly people among those arriving each day at the camp.

“People are sleeping out in the open. There are no tents, just blankets,” he said. “There is some food, like porridge and water, but there are no toilets, showers or health services.

“Many families arrived with nothing more than the clothes on their back. They are essentially arriving with nothing, to nothing.

“There are pregnant women in the camp, diabetics with no insulin, people living with HIV/AIDS with no medical care, and children without parents.

“It’s a deeply traumatic and depressing time for many.” The aid worker added that some people are arriving injured, while many are in distress having witnessed extreme violence in Tigray.

Many are worried for their relatives in Tigray because they could not reach them due to a communication shut down, he said.

“Others have told us harrowing stories about witnessing people being killed, forcing many to flee,” he added.

The NRC is also calling for donations as aid efforts in Sudan are already stretched.