ISTANBUL (Reuters) – Turkey’s President Tayyip Erdogan joined thousands of worshippers at Hagia Sophia on Friday for the first prayers there since he declared the monument, revered by Christians and Muslims for almost 1,500 years, a mosque once again. 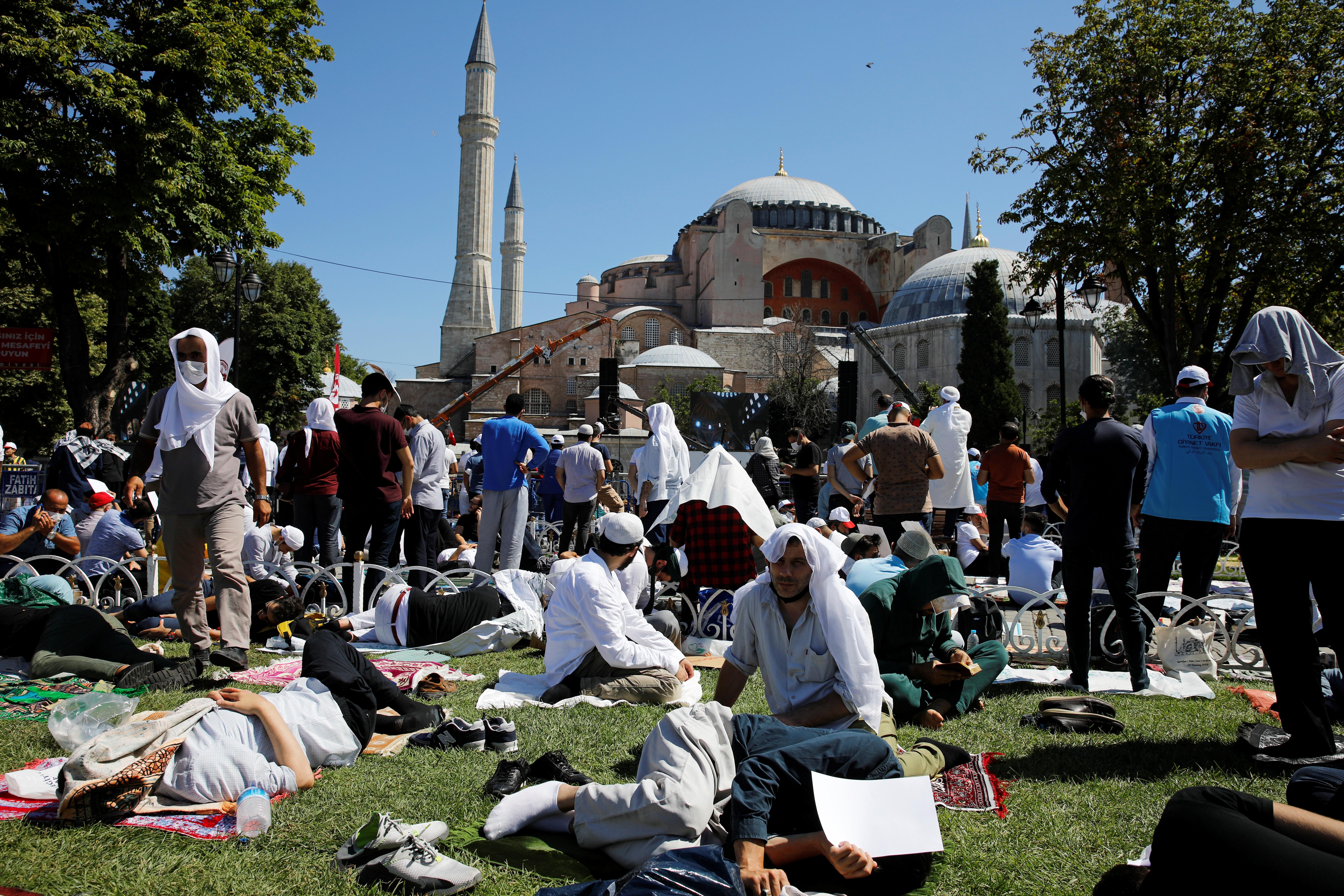 Erdogan and his top ministers, wearing white facemasks as a precaution against COVID-19, knelt on blue carpets at the start of a ceremony which marks the return of Muslim worship to the ancient structure.

An imam began the formal prayer service at 1.45 pm (1045 GMT), after Erdogan read out a Koranic recitation and the call to prayer rang out from the mosque’s minarets.

Earlier, crowds formed at checkpoints around the historic heart of Istanbul where massed police maintained security. Once through the checks, worshippers sat apart on prayer mats in secured areas outside the building in Sultanahmet Square.

“We are ending our 86 years of longing today,” said one man, Sait Colak, referring to the nearly nine decades since Hagia Sophia was declared a museum and ceased to be a place of worship. “Thanks to our president and the court decision, today we are going to have our Friday prayers in Hagia Sophia.”

A top Turkish court announced this month it had annulled Hagia Sophia’s status as a museum. Erdogan immediately decreed that the building, a Christian Byzantine cathedral for 900 years before being seized by Ottoman conquerors and serving as a mosque until 1934, had been converted once again to a mosque.

Several hundred invitees joined Erdogan for the ceremony inside the sixth-century building. Some, including his son-in-law and Finance Minister Berat Albayrak, could be seen recording images of the historic occasion on their mobiles phones.

A large screen and speakers set up in the square broadcast proceedings to the thousands gathered outside.

As crowds grew, leaving little space for social distancing, Istanbul Governor Ali Yerlikaya said authorities had stopped people entering the area due to concerns about the spread of the coronavirus. On Twitter he called for patience and said the mosque would be open for prayer until Saturday morning.

“God is greatest,” chanted people in the square. Some slept after arriving overnight and others ate on the grass, shaded by trees from the hot sun. Some in the crowds held Turkish and Ottoman flags.

“This is a source of great pride for us, great excitement,” said worshipper Latif Ozer, 42.

During his 17-year rule, Erdogan has championed Islam and religious observance and backed efforts to restore Hagia Sophia’s mosque status. He said Muslims should be able to pray there again and raised the issue – popular with many pious AKP-voting Turks – during local elections last year. 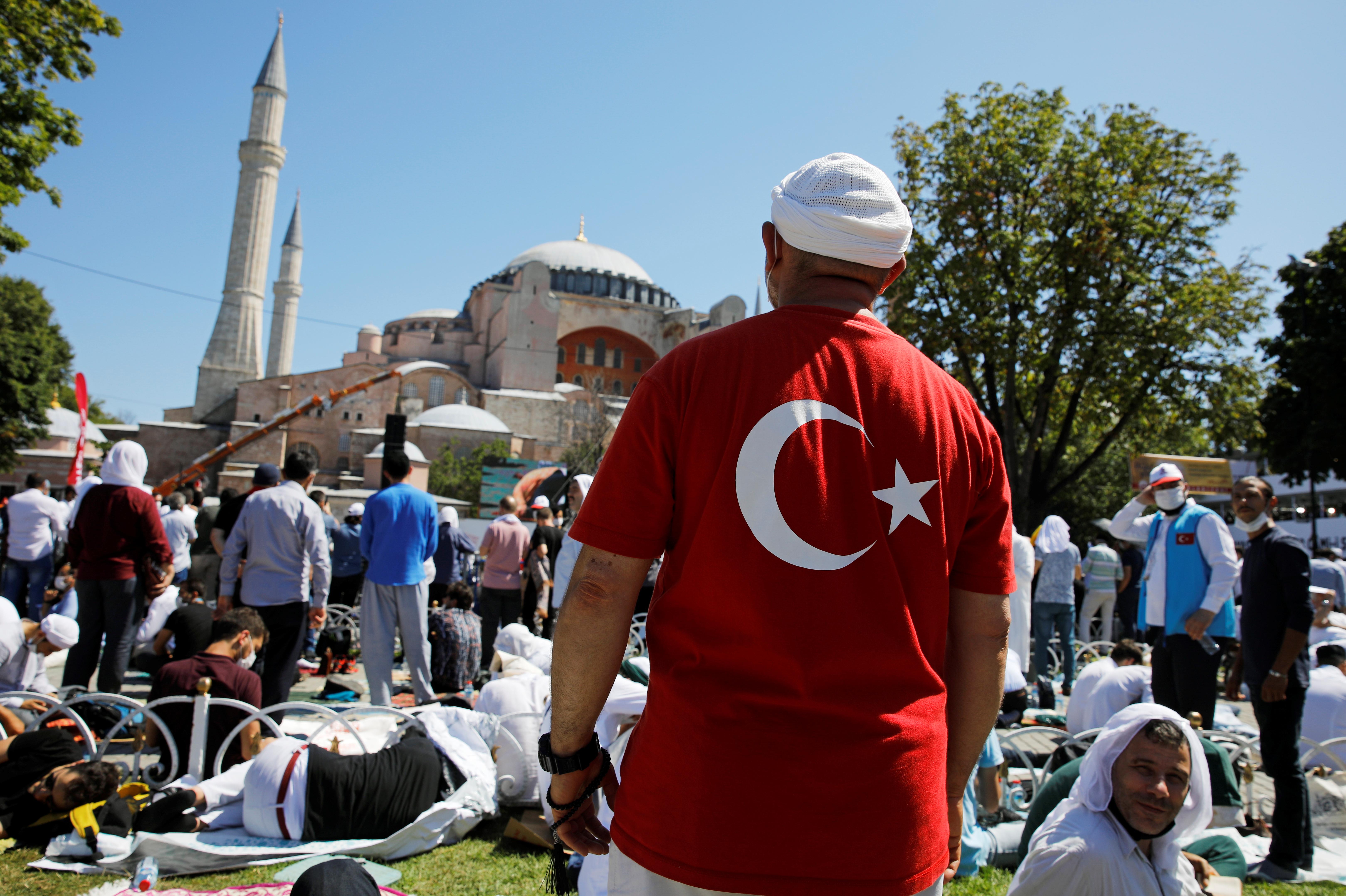 Inside Hagia Sophia, white curtains covered an image of Mary and Jesus which would have faced the worshippers. Officials have said the Christian frescoes and glittering mosaics adorning the cavernous dome and central hall will be concealed during Muslim prayer times, but remain on display for the rest of the time.

On Friday morning, the interior echoed to the sound of Koranic recitations from white-robed clerics, sat on blue carpets freshly laid this week ahead of the prayers.