Abuja, Nigeria – When Osas Osaretin left his home in Abuja in June last year to buy groceries, he could not have imagined the ordeal that would follow.

As he drove towards Wuse, a busy market in the Nigerian capital, the 21-year-old was flagged down by three operatives of the Special Anti-Robbery Squad (SARS) for what he thought was a routine check of his vehicle documents. The gun-wielding police officers ordered him to step out of his car and hand in his mobile telephone for a search.

“They didn’t even allow me to park the car properly and started shouting at me to bring my phone so they can check my messages and call log,” Osaretin recalled.

“Initially, I resisted and tried to explain to them that I did no wrong and questioned why they want to look at my phone contacts,” he told Al Jazeera.

“One of the officers behind me slapped me so hard and forcefully collected the phone. They requested for the phone pin at gunpoint and began to read my messages.”

Osaretin said the SARS officers took him in and accused him of advance-fee fraud against him because of some WhatsApp messages he had exchanged with a friend who lived abroad. Osaretin’s parents had to pay 300,000 naira ($783) before he was released after four days in detention.

“I’m lucky I am alive because some youths that were taken in by SARS never made it out alive,” he said. 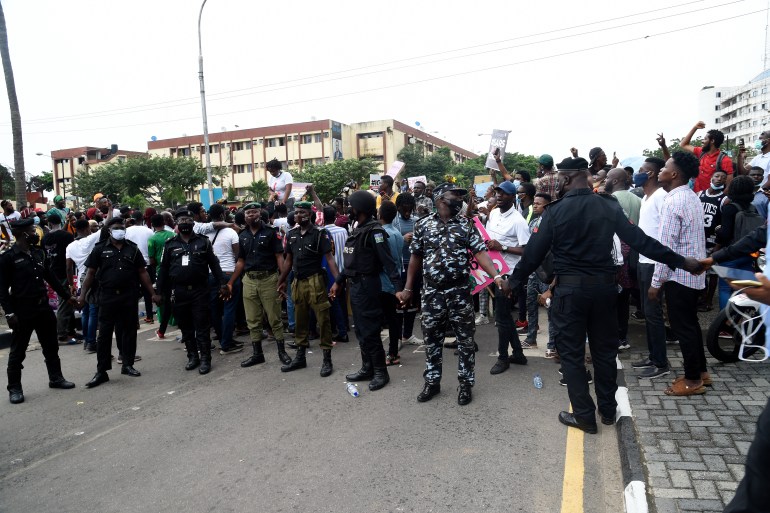 Policemen hold hands to barricade protesters to prevent people gaining entry at a government house during the continuing demonstrations to call for the scrapping of the controversial police unit at Ikeja [Pius Utomi Ekpei/AFP]Osaretin’s case is not an isolated one. For years now, Nigerians have accused the notorious police unit of harassment, unlawful arrests, torture and even killings.

Anger mounted this week after a video showing the alleged killing of a man by an officer in the southern Delta state was widely shared online. Police denied the video was real, but protesters across Nigeria took to the streets for several days to demand an end to police brutality.

One police officer and one protester were reportedly killed during a demonstration against alleged police brutality on Thursday in Ughelli, Delta state.

“The Force will no longer tolerate any attack on its personnel or any member of the law enforcement community by any individual or group protesting under any guise,” police quoted Nigeria’s inspector general of police (IGP) as saying in a series of Twitter post on Friday.

“The IGP notes that protests by citizens remain a legitimate means for airing their concerns and views. It must, however, be carried out with all sense of responsibility and within the confines of the law,” Mohammed Adamu said.

On Saturday morning, youth protesters, some holding placards, gathered under a major bridge in Abuja’s Berge area, in the latest demonstration against police violence.

Resident Amara Nwankpa said he “wanted to speak up and show up for all the victims of police brutality and SARS atrocities, many of who can’t speak for themselves because they are dead”.

Lawrence, 21, a teacher at a private school in Abuja who also took part in Saturday’s protest, said: “SARS have for long been harassing Nigerian youths for lifestyles like driving cars, owning laptops, carrying dreadlocks, which they believe to be criminal.”

He shared one of his past dealings with officers from the unit: “Last year, while returning from a viewing centre with my friends, four SARS officers came out of the dark and accused us of being cultists which we denied and explained where we came from.

“Next, they asked for our phones; I said ‘why’? Next thing that followed was a hot slap on my face … They forcefully collected over 8,000 naira ($21) from us,” he told Al Jazeera.

Many have also been taking to social media to share their stories of abuse using the #EndSARS and #EndSARSProtest hashtags. Footballers, musicians and other celebrities have also supported the online campaign.

“To every youth taking this as seriously as they should, let me say that you all are the real heroes!” comedian Debo Adebayo posted on Twitter. “Whether they like it or not, Nigeria belongs to us and we won’t allow ourselves to be slaughtered day in, day out!” 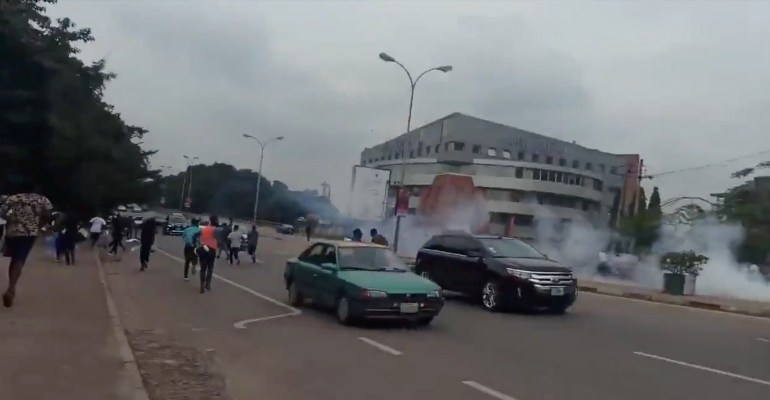 People run during a protest in Abuja on Friday [Anita Izato/Reuters]President Muhammadu Buhari said on Friday he had met Adamu and appealed for “patience and calm”.

“Our determination to reform the police should never be in doubt. I am being briefed regularly on the reform efforts ongoing to end police brutality and unethical conduct, and ensure that the Police are fully accountable to the people,” Buhari posted on Twitter.

“The IG already has my firm instructions  to conclusively address the concerns of Nigerians regarding these excesses, and ensure erring personnel are brought to justice.”

Last week, following the arrests of two SARS agents and a suspected civilian accomplice in Lagos over the “extortion and intimidation of innocent citizens”, Adamu banned the anti-robbery unit from carrying out stop-and-search operations and traffic stops, as well as from mounting roadblocks, “with immediate effect”.

Adamu said police officers must no longer work in plain-clothes but always appear in their uniform or approved tactical gear, adding their remit was limited to cases of armed robbery, kidnapping and other violent crimes “when the need arises”.

But the move failed to appease protesters, who say they are tired of hearing promises of reform.

“SARS must be banned,” said Lawrence. “Previously there have been calls for the reformation of SARS but they have always come back stronger with evil.”

Nwankpa agreed: “This is the fourth time in five years this government is promising to reform SARS. Enough is enough. It has to be abolished now and the police needs immediate reform.”