Southern California is home to the nation’s largest concentration of warehouses — a hub of thousands of mammoth structures, served by belching diesel trucks, that help feed America’s booming appetite for online shopping and also contribute to the worst air pollution in the country.

On Friday, hundreds of residents flocked to an online hearing to support a landmark rule that would force the warehouses to clean up their emissions. The new rule, affecting about 3,000 of the largest warehouses in the area used by Amazon and other retailers, requires operators to slash emissions from the trucks that serve the site or take other measures to improve air quality.

“I’m just tired of living with warehouses, trucks — driving down the Sierra, having trucks pull up, having to put down your windows,” said Daniel Reyes, a resident and member of a local environmental group. “I’m tired of seeing warehouses next to schools. I’m over it, man.”

The rule, which was adopted late Friday by the South Coast Air Quality Management District’s 13-member board in a 9-4 vote, sets a precedent for regulating the exploding e-commerce industry, which has grown even more during the pandemic and has led to a spectacular increase in warehouse construction.

Vast warehouse hubs have sprung up across the country, including in the Lehigh Valley in eastern Pennsylvania, as have sprawling installations in New Jersey, Dallas, Atlanta and Chicago.

The changes could also help spur a more rapid electrification of freight tucks, a significant step toward reducing emissions from transportation, the country’s biggest source of planet-warming greenhouse gases. The emissions are a major contributor to smog-causing nitrogen oxides and diesel particulate matter pollution, which are linked to health problems including respiratory conditions.

“This isn’t just something that’s happening in California — these warehouses are proliferating across the country,” said Adrian Martinez, a staff lawyer at Earthjustice, a nonprofit environmental law firm that supports the restrictions. “This could be a way for other states to also crack down on warehouse emissions.”

The pollution has taken a particularly heavy toll in Southern California, which suffers from the nation’s worst air quality. The heavy presence of industry in the region, combined with heat waves and wildfire smoke, helped make 2020 the smoggiest year in the region since the mid-1990s. Minority neighborhoods have been disproportionately affected.

And the industry is surging. Last year, Inland Empire, a region close to the Los-Angeles-Long Beach port where retailers and manufactures offload billions of dollars in goods, added 23 million square feet of new warehouse construction, an area the equivalent of nearly 500 football fields.

“Where we live, these warehouses are popping up like Starbucks,” said Ivette Torres of the People’s Collective for Environmental Justice, a local nonprofit organization that has campaigned for warehouses to address their role in air pollution.

Operators of warehouses larger than 100,000 square feet (roughly two football fields) are required to earn points to make up for emissions from the trucks that come and go from the warehouses. Operators can earn these points by acquiring or using zero-emissions trucks or yard vehicles, or investing in other methods for reducing greenhouse gas emissions, for example, installing solar panels at the warehouses or having air filters installed in local homes, schools and hospitals. Or they could choose to pay a fee if not in compliance.

Many warehouses are far larger. One planned site involves 40 million square feet of industrial buildings, an area about the size of Central Park in New York.

Known as an “indirect source rule,” the effort is unusual because it largely targets emissions from the trucks that service warehouses, rather than the warehouses themselves. In the past, similar approaches have been made to address the heavy traffic drawn by sports stadiums or shopping malls.

According to estimates by the regulator, its plan will reduce nitrogen oxide emissions by up to 15 percent and result in up to 300 fewer deaths, up to 5,800 fewer asthma attacks, and up to 20,000 fewer work loss days between 2022 and 2031. The district estimated that public health benefits from its plan could be as much as $2.7 billion, about three times the projected costs.

The region, which includes portions of Los Angeles, Riverside and San Bernardino Counties and all of Orange County, has a population of 18 million people — more than most states.

Last year, California also adopted a separate rule requiring more than half of all trucks sold in the state to be zero-emissions by 2035. 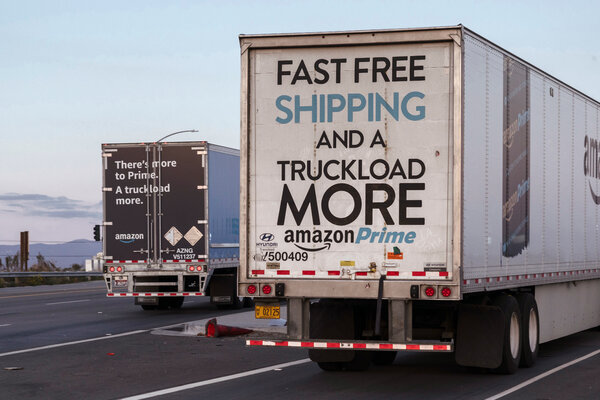 Several industries, including commercial real estate and trucking, have opposed Southern California’s plan to specifically target warehouses, saying the district is overstepping its legal authority, that the rule would add to the expense of doing business in the area and would cost jobs.

“The proposed increases would substantially increase the cost of all goods and services, including groceries,” the Commercial Real Estate Development Association, which represents developers nationwide, said in its letter on March 2 to regulators. Many warehouses don’t have control over the trucks that service them, the industry group wrote. And for some larger classes of freight trucks, fully electric versions are not yet available.

“As we emerge from the pandemic, the last thing we should be doing is threatening jobs,” said Paul Granillo, president of the Inland Empire Economic Partnership, a local chamber of commerce organization.

Supporters of the rule say that warehouse real estate values have surged in recent years, giving developers financial leeway to clean up their operations. According to the air district, about 40 percent of warehouse operators own their own trucks, and others contract directly with trucking companies, giving them control over the fleets that service them. Many new electric truck models are in the pipeline, which supporters say will give operators more environmental-friendly options to choose from. And if operators fall short, they can opt to comply through other means or pay a fee instead.

In its analysis, the air board said it expected “no warehouse relocation and minimal goods movement diversion” from the new rule.

Not all business interests are opposed. The Southern California Edison utility, electric truck makers, as well as some trade groups, spoke out in support.

“Not only will this protect the district, especially warehouse workers,” said Joe Sullivan of the National Electrical Contractors Association of Greater Los Angeles, “it will create projects that our contractors are eager to bid on, and build careers for skilled tradespeople.”

Large retailers like Amazon and Walmart — who have pledged to clean up the environmental effects of their supply chains, including electrifying their fleets — have largely stayed on the sidelines of the debate.

Walmart, which has committed to operate 100 percent zero-emission trucks by 2040, did not respond to a request for comment. Amazon said it was “committed to finding innovative solutions to reduce emissions.” The online retailer has pledged to be net zero carbon emissions across its business, also by 2040.