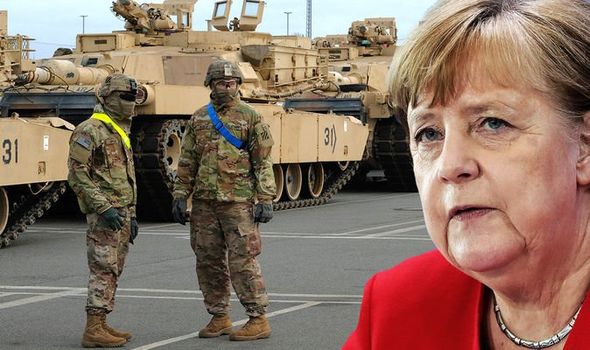 US Defence Minister Mark Esper announced plans to withdraw troops from Germany to Washington on Wednesday. Other troops are to be repositioned to Italy. Estimates suggest 12,000 troops will be leaving Germany, with half of them returning to America. The plans, which were being outlined today at the Pentagon, follow on from an explosive row between Mr Trump and Ms Merkel over NATO funding.

President Trump has repeatedly accused Germany of not paying its fair share of money to the allied nations.

Germany pays only 1.38 per cent of GPD on NATO compared to the 3.4 per cent paid by the Americans.

No full reason was given for the troop withdrawal, announced in June, but experts linked the move to Mr Trump’s anger towards German policy.

As well as the NATO funding, the US is not happy with Germany’s trade surplus or Berlin’s link up with Russia on the Nord Stream 2 gas pipeline.

The withdrawal is an affront to one of the United States’ closest allies and trading partners and is controversial both in the military and in Mr Trump’s own Republican camp, which is gearing up for the November 3 election.