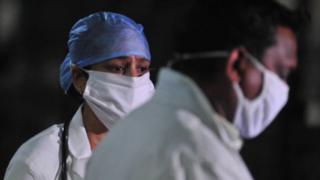 Dr Milind Baldi was on duty in a Covid-19 ward when a 46-year-old man was wheeled in with severe breathing difficulty.

The man was scared for his life and kept repeating one question: “Will I survive?”

The question was followed by a plea: “Please save me, I don’t want to die.”

Dr Baldi assured the man that he was going to do “everything possible to save him”.

These were the last words spoken between the two men. The patient was put on a ventilator, and died two days later.

The doctor, who works in a hospital in the central Indian city of Indore, vividly remembers the 30 “terrifying minutes” after the patient was brought to his hospital.

“He kept holding my hands. His eyes were full of fear and pain. I will never forget his face.”

His death deeply affected Dr Baldi. “It ate away my soul from inside and left a lacuna in my heart.”

Seeing patients die in critical care wards is not uncommon for doctors like him. But, he says, nothing can compare to the psychological stress of working in a Covid-19 ward.

Most coronavirus patients are kept in isolation, which means, if they become critically ill, doctors and nurses are the only people they see in their final hours.

“No doctor ever wants to be in this scenario,” says Dr A Fathahudeen, who heads the critical care department at Ernakulam Medical College in southern India.

Doctors say they usually share the emotional burden of treating someone with that person’s family.

But Covid-19 doesn’t allow that.

Dr Fathahudeen says he will never forget “the blankness in the eyes” of a Covid-19 patient who died in his hospital.

“He wasn’t able to talk. But his eyes reflected the pain and the fear he was experiencing.”

Dr Fathahudeen felt helpless because the patient was going to die alone. But there was a tiny sliver of hope: the man’s wife was being treated for coronavirus in the same hospital.

So Dr Fathahudeen brought her to the ward. She stood still and kept looking at him and said her goodbye. She never thought her 40-year marriage would end so abruptly.

The experienced doctor says the incident left him “emotionally consumed”. But, he adds, there was “some satisfaction that he didn’t die without seeing his wife”.

“But that won’t always happen. The harsh truth is that some patients will die without saying goodbye to their loved ones.”

The emotional toll is made much worse as many doctors are themselves are in a form of isolation – most are staying away from their families to protect them.

As a result, Dr Mir Shahnawaz, who works at the Government Chest Hospital in Srinagar, says it’s “not just the disease we are fighting with”.

“Imagine not knowing when you will see your family next, add that to the constant fear that you may get infected and you will begin to understand what we are going through.”

Adding to the stress, is the fact that they also have to constantly deal with the emotional outbursts of patients.

“They are very scared and we have to keep them calm – be their friend and doctor at the same time.”

And doctors also have to make phone calls to the families of patients, and deal with their fears too.

“It hits you when you go back to your room in the night. Then there is the fear of the unknown – we don’t know how bad the situation will get.”

Doctors are used to saving lives, he adds, and “we will continue to do that no matter what”.

He says that the first coronavirus death in his hospital made his colleagues break down: it was when they realised that Covid-19 doesn’t afford the family a final glimpse of their loved one.

“Family members want to remember the final moments of a patient – a faint smile, a few last words, anything really to hold on to. But they can’t even give a proper burial to the dead.”

Dr Fathahudeen says such psychological pressure needs to be addressed and each hospital needs to have a psychiatrist – both for doctors and patients.

“This is something I have done in my hospital. It’s important because otherwise the emotional scars will be too deep to heal. We are staring at cases of PTSD among frontline workers.”

It is not just those working in Covid-19 wards who are on the front line, but also the doctors, community health workers and officials who are involved in contact tracing and screening suspected patients by going door-to-door in virus hotspots.

Dr Varsha Saxena, who works in the badly affected northern city of Jaipur, says she walks into grave danger knowingly every day. Her job is to screen people for possible symptoms.

“There is no other option. It’s the fight of our lifetime, but one can’t ignore the risks,” she says.

“But it poses great risk because we don’t know who among the ones we are screening is actually positive,” she adds.

She says doctors like her don’t always get proper medical-grade personal protective equipment.

“The fear of getting infected is always there and we have to live with it. It does play on our mind and we have to fight hard to keep such negative thoughts away.”

But her biggest fear, she says, is getting infected and not showing any symptoms. “Then the risk is that we may end up infecting others. That is why field doctors also need PPE,” she adds.

“It’s so draining. My husband is also a doctor, most nights we don’t even have energy to cook and our dinner involves just bread.”

Aqueel Khan, a bureaucrat and a colleague of Dr Saxena, acknowledges that psychological stress is a reality for all frontline workers, including officers like him who are embedded with medical teams.

The fear really comes home for these workers when somebody close to them dies.

Mr Khan is also staying away from his family: this year is the first time he will miss his daughter’s birthday.

“My heart says to go home and see her from far, but the mind tells me otherwise. This constant struggle is very stressful.

“But we can’t turn our backs on the job. We just have to just keep at it, hoping that we come out alive on the other side of this fight.”

‘The risk is always there’

There is no respite for doctors and nurses even when they are not directly involved in the fight against coronavirus.

People with other ailments are continuing to come to hospitals. And there has also been a surge in the number of people who are turning up at hospitals with coronavirus-like symptoms.

Dr Mohsin Bin Mushtaq, who works at the GMC Hospital in Indian-administered Kashmir, says coronavirus has “fundamentally changed our lives”.

“We are seeing patients every day for other ailments. But the risk is always there that some of them could be infected,” he said.

And it worries him even more when he reads about doctors getting infected despite wearing PPE and dying. A number of doctors have died in India and dozens have tested positive.

There is nothing we can do about it, he says, adding that “we just have to be mentally strong and do our jobs”.

Dr Mehnaz Bhat and Dr Sartaz Bhat also work in the same hospital, and they say that the “fear among patients is too much”.

Dr Sartaz says people with a slight cold end up thinking they have coronavirus, and rush to the hospital.

“So apart from treating them, we also have to deal with their fear,” Dr Sartaz adds.

He recently diagnosed Covid-19 symptoms in a patient and advised him to go for testing. But his family refused and took him away.

The patient was brought back to the hospital after Dr Sartaz called the police. He says he had never imagined doing something like this in his medical career.

“This is the new normal.”

The way patients are examined has also changed for some doctors.

“We really have to try and limit close interactions with patients,” Dr Mehnaz Bhat says. “But it’s not what we have been trained for. So much has changed so quickly, it’s stressful,” she says.

And several attacks on doctors and nurses across the country have made them even more worried.

She says it’s difficult to understand why anybody would attack doctors. “We are saving lives, risking our lives every day. We need love, not fear.” she adds.