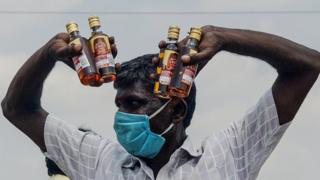 When some Indian cities eased the grinding lockdown last week to prevent the spread of the novel coronavirus, long queues were seen outside liquor shops across the country.

In cities like Mumbai, a Covid-19 hotspot, booze-loving people made a mockery of social distancing rules, prompting the government to shut the shops again. Police baton charged unruly buyers. There was social media chatter over a 52,000 rupees ($690; £560) receipt of a single alcohol buyer in Bangalore.

The manic rush was not surprising: the harsh lockdown meant there was a pent up demand for booze. There have been reports of a spike in alcohol sales around the world: in the UK, sales were up by 22% in March and in the US they have risen 55% compared to the same period last year.

Selling alcohol has never been easy in India. E-commerce and home deliveries are not allowed. Many state governments have turned against booze because prohibition is a potential vote winner. Each of the 29 states has its own policies to control the production, price, sale and taxes on booze.

Yet, by volume, India is the world’s second-largest consumer of alcohol, behind China, according IWSR Drinks Market Analysis, a London-based research firm. India consumes more than 663 million litres of alcohol, up 11% from 2017.

India consumes more whiskey than any other country in the world – about three times more than the US, which is the next biggest consumer. Nearly one in every two bottles of whiskey brought around the world is now sold in India. When worldwide booze consumption dipped in 2018, India partly drove a 7% uptick in the global whiskey market.

Five southern states – Andhra Pradesh, Telangana, Tamil Nadu, Karnataka and Kerala – account for more than 45% of all liquor sold in India. Not surprisingly, more than 10% of their revenues come from taxes on liquor sales, according to the research wing of Crisil, a ratings and analytics firm.

Another six top consuming states – Punjab, Rajasthan, Uttar Pradesh, Madhya Pradesh, West Bengal and Maharashtra – mop up between less than five to 10% of their revenues from liquor.

“But not a drop was sold in April, and given the dire state of their revenues, these states have been anxious to make good their losses by opening up the liquor vends,” the research agency said. Lack of liquor taxes has left near-bankrupt states groaning under the lockdown with little money to spend.

A third of Indian men drink alcohol, according to a new government report. More than 14% of all Indians aged between 10 and 75 drink. The World Health Organization (WHO) estimates 11% of Indians are binge drinkers, against the global average of 16%.

Most worryingly, a third of the drinkers consume cheap and dodgy locally brewed or country liquor, responsible for several tragedies, involving adulteration. Some 19% of alcohol users dependent on it, according to the report. Around 30 million people consume alcohol in a “harmful manner”.

Also, the WHO reckons that “unrecorded” alcohol makes up more than half of all alcohol consumed in India. Locally brewed liquor, for example, is not recorded or taxed in some states. A survey by the International Alliance of Responsible Drinking in 2014 found a large number of drinkers preferring country liquor or homemade alcohol, often counterfeit and contraband.

Indians are drinking more than before. A recent study of liquor consumption in 189 countries between 1990 and 2017 found that consumption in India had grown by 38% – from 4.3 litres a year per adult to 5.9 litres.

Jakob Manthey of Technische Universitat Dresden in Germany and a lead author of the study, told me that consumption had gone up because the “number of people with sufficient income to purchase alcohol has outpaced the effects of measure aiming to reduce consumption”.

Dr Manthey says the main burden from alcohol in India stems from non-communicable diseases, such as cirrhosis of live and cardiovascular diseases. “They are increasingly relevant for public health in India and increasing alcohol use will only pronounce this trend”.

In 2012, a third of all road accident deaths were attributed to drunk driving. Nearly 10% of adult men were found to be addicted to alcohol, according to the National Mental Healthy Survey, 2015-16. More than 60% of deaths due to cirrhosis of liver were linked to consumption of alcohol. Alcohol consumption is emerging as a major public health problem . It has been also strongly linked to domestic violence: rural women in large parts of the country have been the greatest supporters of prohibition.

Making liquor more expensive might not help. Research by Santosh Kumar, an economist at Sam Houston State University, found raising prices on alcohol like whiskey and rum produce “modest and small” reduction in consumption. Dr Kumar believe a “combination of price controls and awareness campaigns” would be most effective in tackling adverse effects of harmful drinking in India.

Yogendra Yadav, leader of the Swaraj India party and a political analyst, suggests a “national plan for gradual reduction” of India’s dependence on alcohol. This would include governments reducing dependence on liquor revenues, stop aggressive promotion of booze, enforce existing rules and laws about sale and retail of liquor, and taking the consent of 10% of local people before giving a retail license in a neighbourhood, and using revenues from liquor sales to wean people away from drinking.

Enforcing prohibition over freedom of choice has proved to be self-defeating and led to a thriving black market. Making drinking a moral issue raises the hackles of the liberals. But, as Pratap Bhanu Mehta, a leading analyst, says, if “we really care for freedom, we also need to question our own addiction to the cultural and political economy of alcohol, and find intelligent pathways around a complex problem”.

It won’t be easy.