Italy and Belgium have introduced new socialising rules amid fears there could be a “tsunami” in coronavirus cases.

The new restrictions in Belgium came into force as a government minister admitted the country can “no longer control” the current rate of COVID-19 transmission.

Bars and restaurants have been closed with only takeaways allowed up until 10pm, while groups of people are limited to four when together in public spaces.

Close contact with just one person is allowed outside a household while the same four guests, changeable every two weeks, may visit a home if they follow social distancing rules. There is also a nightly curfew from midnight to 5am.

Live coronavirus updates from the UK and around the world 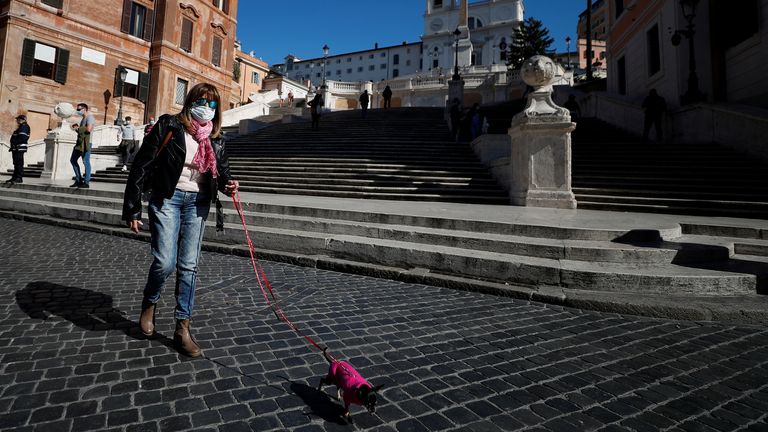 The tougher measures were introduced as health minister Frank Vandenbroucke said the situation in parts of Belgium was “the most dangerous” in Europe.

He told the broadcaster RTL: “We are the most affected region in all of Europe. We are really close to a tsunami. We no longer control what is happening.

“If it continues to increase, the number of hospitalisations will be such that we will have to postpone more and more non-COVID care, which is also very dangerous.”

Italy has introduced its own rule of six as part of a range of measures which came into force at midnight and are currently scheduled to last until 13 November.

A maximum of six people can sit together at restaurants and bars. Table service is mandatory after 6pm.

Mayors can order the closure of public spaces such as streets and squares after 9pm, while public events have been suspended.

Italy is expected to make a decision on whether to close gyms and swimming pools later this week. According to the latest coronavirus figures from Johns Hopkins University which has been tracking the outbreak, there have been more than 414,000 confirmed cases in Italy and more than 36,500 deaths. Belgium has recorded more than 222,200 cases and its death toll stands at more than 10,400.

Meanwhile, the Czech Republic, which has the highest coronavirus infection rate in Europe per head of population (828 per 100,000), will wait at least two weeks to analyse the impact of new rules before deciding whether to order a full lockdown.

Bars and restaurants have been told to close except for providing a takeaway service.

Gyms, theatres and cinemas had already shut their doors. Police also had to deal with anti-mask protests held on Sunday.

The country has recorded more than 173,800 confirmed cases and more than 1,400 fatalities.

Watch and follow ‘Postcode Lockdown: A Divided Nation’ on Sky News from 9pm on Monday, as it examines which strategy is best for Britain