Germany is considering further coronavirus restrictions if infections there continue to rise amid a second wave of the illness across Europe.

German Chancellor Angela Merkel, as well as the mayors of 11 cities, agreed a package of measures on Friday that aimed to stem the rise in coronavirus infections.

Cities will now be able to ask the country’s health department to send in the military for support if the infection rate surpasses 35 per 100,000 within a week. 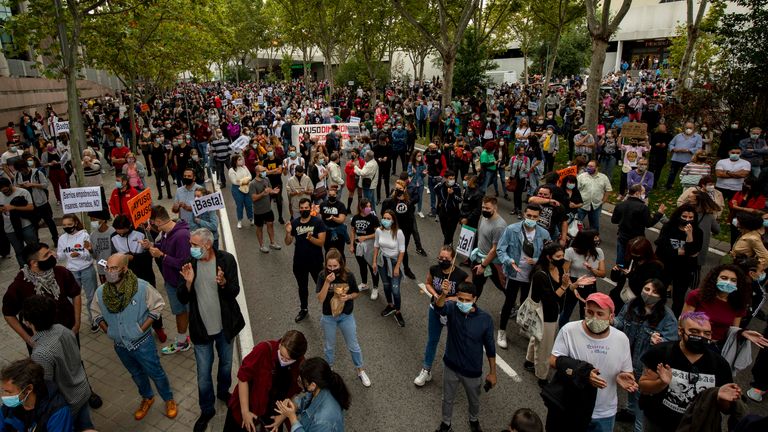 There is also an 11pm curfew for bars and restaurants across Germany until the end of October.

Hospitals in the country have warned there could be staff shortages due to staff sicknesses as a result of COVID-19.

The country, which was widely praised for its coronavirus response, is now seeing its biggest jump in infections since April.

Germany has been added to its Swiss neighbour’s quarantine list in recent days too, amid the climbing infection rate.

Switzerland has also added Austria and Italy to its list of places from which travellers will have to isolate for 10 days.

However, there are very few domestic restrictions in Switzerland, and instead citizens are reminded of the importance of social distancing and proper hygiene. The country wants to avoid telling people to stay at home again, despite the rise in infections.

On Friday, France reported more than 20,000 daily cases of coronavirus – a record for the country.

The positivity rate of testing was more than 10% and 124 new hotspots were discovered across the country, meaning more than 1,300 places in France were now being monitored.

Elsewhere in Europe, leaders in Spain have declared a state of emergency in Madrid for 15 days amid rising infections in the Spanish capital.

Madrid has been effectively sealed off from the rest of the country, with police patrolling the streets in an effort to keep people at home in the city – a move which has sparked protests and anger.

The country has more than 860,000 confirmed cases – the highest in Europe.