It was a cold but bright March day in the Upper City of Bergamo in Lombardy when I first met Michele and Serena, huddled together in big coats and scarves sitting on the steps of the magnificent library in the equally magnificent main square of the town.

This was in the midst of the Italian coronavirus lockdown.

The beautiful cobblestone streets of this medieval city, once the western most point of the Venetian empire, were almost completely deserted. There was utter silence except for the chimes of the church clocks every half an hour.

We hadn’t seen a total lockdown before.

The UK was still grappling with the whole concept in a half-hearted manner.

But here the pandemic was already overwhelming some of the most sophisticated hospitals in the world.

Within a few days of meeting the couple we had been allowed inside the main hospital in Bergamo and we filed a story that gave the world a glimpse of what a virus storm was going to look like when it hit.

In those early moments with Michele and Serena, neither they nor us knew what was happening just a mile or so away in the Papa Giovanni XXIII Hospital; but even without that knowledge this couple in their 70s knew they had to isolate.

They only came out to get supplies and the local paper for Michele. They never left each other.

We had arrived to have a look and to see if we could talk to someone. It was a bit of old school journalism. The whole trip was. We didn’t know what to expect so we decided to go and see.

The streets were empty. We knew the town was full but nobody was coming outside unless they had to.

I saw the pair, both aged 73, and thought we should ask them a few questions.

Both were initially nervous, although they were always friendly.

At one point I moved forward to hear Michele speak but they both raised their arms and motioned that I should move back.

It’s common now – it wasn’t then. It was that early in the pandemic.

What struck me was how calm they were but also how scared they were.

They knew they were at the top of the list of the most vulnerable. They had no idea how long the lockdown would last but they knew they would have to tough it out together.

It was a magical interview in its own way and when I returned to Milan to write my story I shed a few tears. In a way, to me, they represented all the elderly people of the world who were scared and cut off. My parents are long dead and I am glad they didn’t live to see this pandemic, to live in fear like Michele and Serena.

From Italy, our reporting took us to the nightmare virus outbreaks in Mexico and Brazil, but we always felt the need to return to Bergamo and Northern Italy to see how this society coped and survived as the lockdown rules were relaxed.

As one might expect, we decided that we should try and meet everyone we had interviewed at that time.

Through Simone, our local producer, we made contact with everyone. In hospitals, in towns, anyone we had randomly met. But we could not find Michele and Serena. They had disappeared.

Throughout our return to Bergamo with interviews and filming to do I had a constant nagging that we just had to find this couple. We didn’t say it but we were all scared that maybe they hadn’t made it. We just wanted to find them and make sure they were okay. Armed with a printed black and white photograph of the pair we had taken at the time, and colour photos on our phones, we returned to the Upper City and to the place we had met them. We went from shop to shop.

The shop keepers would stare and look and say they didn’t recognise them. We stopped people in the street, we called people into the huddles looking at the picture. Nothing.

We left a small supermarket beginning to think we had failed.

As we walked away we heard a shout and one of the shopkeepers waved for us to come back. She told me to try in a small delicatessen up the street.

“The owner is quite old,” she said.

“If anyone knows them, he will.”

Through hanging hams and salami I spotted an elderly gentleman working at a preparation table.

We got out the photograph. Angelo Mangili put his glasses on and squinted at our print. 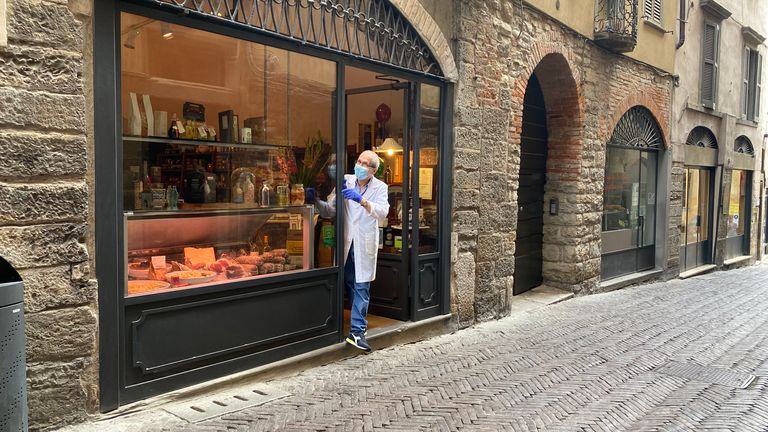 “I can’t make them out because of their masks,” he said.

I felt the tears run down my cheeks. Covering this story is frankly emotional. We have seen so many people die, have reported on so many deaths, now finally something may be nice.

He gave us directions. Trust me it’s complicated in a medieval city. Think Game Of Thrones.