LONDON (Reuters) – A statue of Robert Milligan, an 18th century slave trader, was removed from its plinth outside a London museum on Tuesday after global anti-racism protests triggered a debate about how Britain commemorates its imperial past. 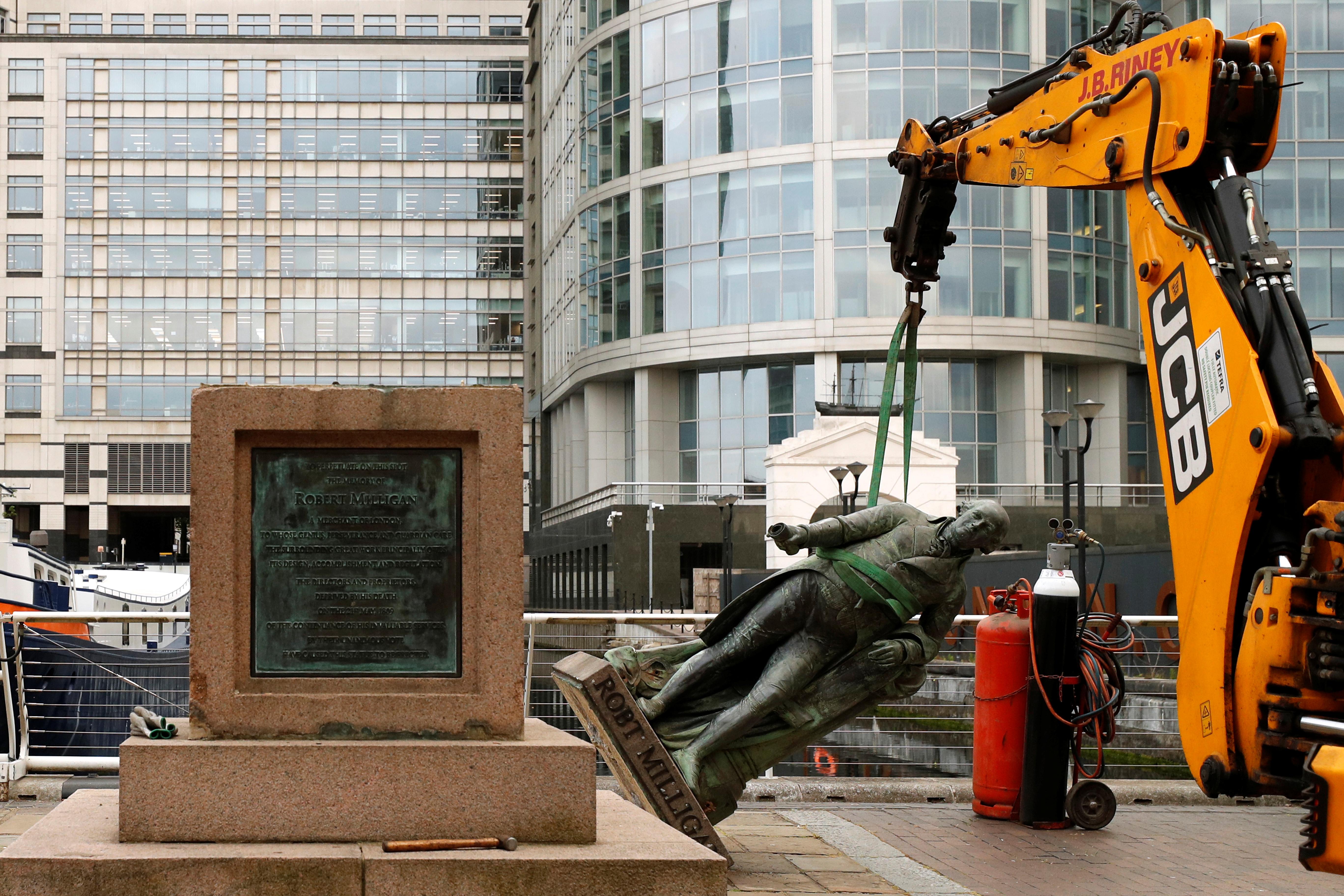 Statues glorifying slave traders and colonialists have come into sharp focus in recent days, as part of a broader movement inspired by the Black Lives Matter protests that started in the United States following the death of George Floyd.

“While it’s a sad truth that much of our city and nation’s wealth was derived from the slave trade, this does not have to be celebrated in our public spaces,” said London Mayor Sadiq Khan in a tweet with a photo of the statue.

Earlier, Khan ordered a review of statues and street names across London, in response to mass protests in the city and elsewhere.

On Sunday, protesters in the English port city of Bristol tore down the statue of a slave trader and threw it in the harbour, while in Oxford on Monday more than 1,000 demonstrators demanded the removal of a statue of colonialist Cecil Rhodes.

The previously obscure statue of Milligan stood in front of the Museum of London Docklands, on the edge of the glitzy business district of Canary Wharf, which is surrounded by the multi-ethnic, working-class borough of Tower Hamlets.

Milligan, who owned sugar plantations in Jamaica, was involved in the construction of London’s West India Docks.

Onlookers cheered and applauded as workers in high-visibility jackets separated the statue from its plinth, then lifted it off with a crane truck.

The mayor of Tower Hamlets, John Biggs, told Reuters from the scene he felt strongly it was no longer appropriate to leave the statue in place. He said it would be put into storage and discussions would take place about what to do with it.

“People assumed he was just a businessman who helped build the docks, but when you dig into it you learn that in fact he was a slave trader,” Biggs said. “I find it refreshing, I find it inspiring that people want to learn and reflect.”

The decision to remove the statue was taken by the owners of the land, a body called the Canal and River Trust. “We recognise the wishes of the local community concerning the statue of Robert Milligan at London Docklands,” it said in a statement.

The orderly removal of the statue was in contrast to chaotic scenes in Bristol on Sunday. Police there decided not to stop protesters from toppling a statue of 17th century slave trader Edward Colston to avoid inflaming the situation.

Mayor Khan said a commission would review statues, plaques and street names which reflect the rapid expansion of London’s wealth and power at the height of Britain’s empire in the reign of Queen Victoria. 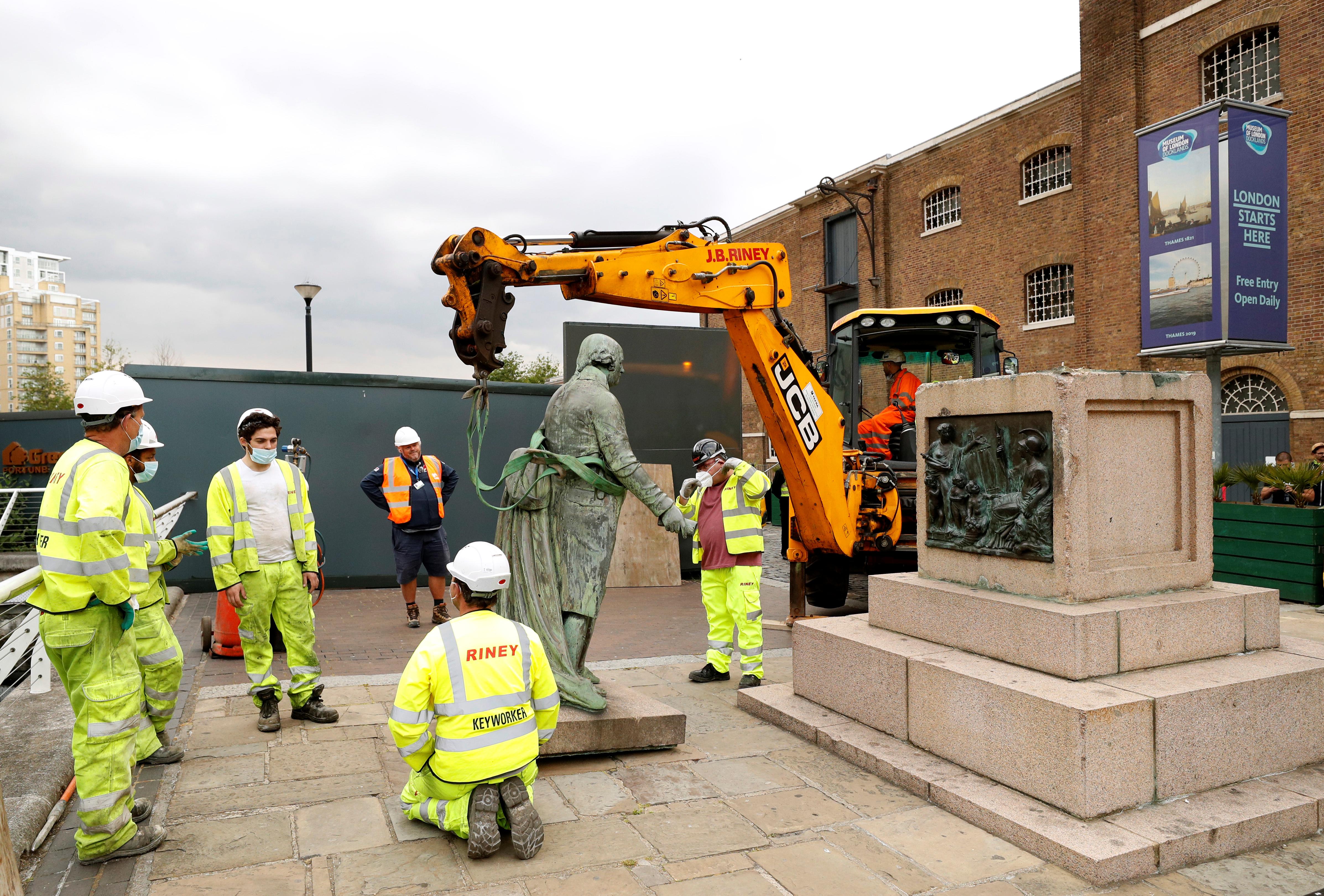 “Our capital’s diversity is our greatest strength, yet our statues, road names and public spaces reflect a bygone era,” he said.

As many as 17 million African men, women and children were torn from their homes and shipped to the Americas between the 15th and 19th centuries. Ships returned to Europe with sugar, cotton and tobacco cultivated by slaves on brutal plantations.