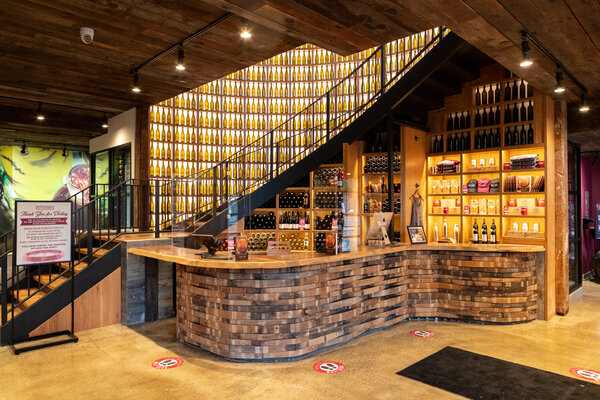 In the midst of the pandemic, it pays to have lots of space. Michael Dorf, the owner of City Winery, a group of wine, food and music spaces, has just such a location: 32,000 square feet on a renovated Hudson River pier that can accommodate 200 socially distanced indoor seats at the required 25 percent capacity. There are also 70 seats outdoors. City Winery started in 2008 in Hudson Square, but it had to move after its block was bought by Disney in 2018. There are now full locations in seven cities across the country, not including another four satellite venues, plus one in the Hudson Valley. No stranger to challenges, Mr. Dorf said he started the City Winery brand in a major economic downturn, and now, “I am launching our new flagship during a global pandemic.” Planned music events, for which City Winery is known, have yet to be permitted. There’s a cellar with 1,200 bottles and a Mediterranean menu from the chef Robert Hamburg that includes pizza and assorted flatbreads. Like its original location, the new City Winery has a winemaking facility, storage tanks and barrels. There are a dozen wines on tap.

This counter-service spot offers rice or grain bowls topped with choices like Yunnan brisket, soy-roasted chicken or Mandarin duck, among other options, that can also be ordered as family-style platters. There are plates of wontons, side dishes like charred broccoli and cucumbers marinated with chile and garlic, and alcoholic and non-alcoholic beverages alike. The restaurant was created by Connie Chung — who oversaw the culinary aspects of the restaurants in the Make It Nice group, including Eleven Madison Park and NoMad — with Vincent Chao, who was the director of business development at Make It Nice. A third partner is Milan Sekulic, who owned a cocktail bar in Beijing.

No storefront, not even a bench, exists for this dumpling specialist. It offers only delivery from kitchens run by Kitch in the Flatiron district, the Upper West Side and SoHo. Handmade dumplings filled with pork and chives, lamb with cilantro, and chicken and broccoli are some of the choices.

Flynn McGarry is reopening his Lower East Side restaurant for only dinner for now, limited to a single party of eight to 10 guests at 7 p.m. each night. They will enjoy an eight-course feast with three wines.

This new pop-up, in the former Manzo restaurant space, will feature Milanese and northern Italian specialties like veal cotoletta, osso buco with saffron risotto, and Negronis, along with 30 wines made within 100 miles of Milan. The menu is written in Milanese dialect — with translations — and there are 24 indoor seats. (Friday)

What began as a pop-up serving Chinese-American food, with the chef Lucas Sin of Junzi Kitchen at the helm, is now a permanent establishment. So, Mr. Sin’s General Tso’s chicken and other favorites are available for takeout and delivery.

This inventive restaurant is the latest from Matthew Kenney, who is known for plant-based fare. It serves only lunch, but breakfast and dinner are coming. The menu includes carrot and zucchini pasta with sun-dried tomato marinara, pistachio pesto and plant-based ricotta; and a dessert of golden non-dairy “milk” and coconut cream pie with spiced cashews. Dinner, bar service and a liquor license are in the works. (Wednesday)

In 2014, Aldo Sohm, the wine director of Le Bernardin, opened Aldo Sohm Wine Bar in the courtyard across from the restaurant, in partnership with Eric Ripert and Maguy Le Coze, the owners of Le Bernardin. Now, it has expanded, with a new second-floor lounge. Wine selections emphasizing various regions of the world are served amid socially distant seating.

The third of this group of Italian restaurants will open in the former Delicatessen space with 40 seats inside and 50 outside, as dictated by safety protocols. There is also a glassed-in atrium that seats 12 at this time. Garage doors and heaters will make the sidewalk seating more comfortable. Unique to this location will be assorted fritti (Italian fried foods), chicken diavolo and mozzarella in carrozza. Next year, a downstairs Negroni bar, La Pecora Nera (Black Sheep), will be added. (Thursday)

Michele Casadei Massari, the chef and owner, bought a clear waterproof, wind-resistant tent that sits on the sidewalk to comfortably accommodate guests. Dishes like pizza strewn with black truffles; pot roast; cheese ravioli; or risotto with white truffles from Urbani are on a special two-course menu, with a glass of Prunotto Barolo or nebbiolo, for $119 per person. The meal is served to only parties of four to eight in the bubble.

What was Capri, a Little Italy stalwart, has been turned into a spot for Italian classics and a broader inventory of Mediterranean fare like wood-roasted salmon with fennel and lemon confit, and wood-fired roasted chicken Provençal. The owner, Marcello Assante, will add a private event space, the Mulberry Venue, on the lower level.

Chef on the Move

Ms. Bickford, the new executive chef at Commander’s Palace, the landmark garden district restaurant in New Orleans, and the flagship of the Brennan family’s properties, is the first woman to hold that position. A native of Louisiana, she started at the restaurant in 2008. Since then she has worked at another Brennan restaurant, and for the past few years has been at Commander’s under the leadership of Tory McPhail, who is moving to Montana. Her expertise is in both Creole and Cajun cooking.

Pino Luongo, the chef and restaurateur of Morso in Midtown East and Coco Pazzo in SoHo, has taken over Giorgione, Giorgio DeLuca’s Hudson Square restaurant, and also Il Valentino Osteria, around the corner from Morso. He is turning both into pizzerias. He said some of the chefs who worked for him at Le Madri in Chelsea would be back at the Giorgione space. “I’m optimistic about New York,” he said of opening two restaurants right now. He expects both spots, which will offer some gluten-free dishes, to open next summer.