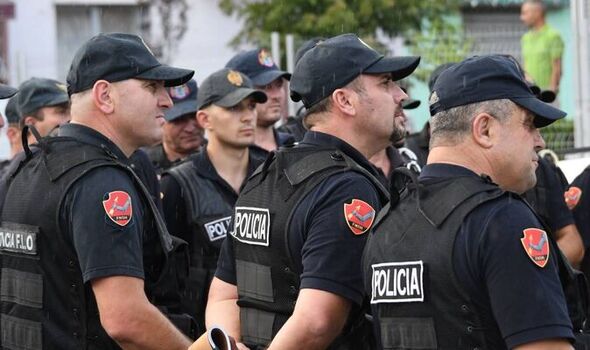 Some are fleeing persecution or poverty, but many are trafficked by gangs to work in cannabis factories and other criminal enterprises. Albanians are now the biggest group of foreign nationals in British prisons. In the past decade, Albanian crime networks have risen to the upper echelons of cocaine supply and cannabis production here.

And new ads appear as soon as the social media platform removes any.

Prof Karamuco, who has previously advised the Albanian government on organised crime and corruption, said: “Though Albanian and British police have a close co-operation, it hasn’t yet prevented a criminal activity which is expanding rapidly.”

“This did not even happen when immigrants appeared on TikTok recently sailing to the coast of England.

“These social networks also offer menus with specific prices on how to get to England, offering trucks, boats and speedboats.”

He added: “Albania follows British policing principles. But until now it has not shown considerable determination to prevent illegal immigration traffic, fight money laundering activities and transnational crime links that are endangering public safety in our country and beyond.”

“Closer co-operation between the law enforcement agencies of our countries is needed.”

His plea came as Alastair King-Smith, Britain’s ambassador to Albania, based in the capital Tirana, held a meeting with Gladis Nano, the general director of the Albanian Police, last week.

Mr King-Smith said: “We expressed our shared determination to stop the flow of illegal immigrants to the UK and Europe. We discussed the reality awaiting everyone who arrives on UK shores. Illegal immigrants cannot secure legal jobs.”

“They will soon return to Albania and will never be able to travel to the UK again. All those people and their families who may be tempted to travel to Britain should not fall prey to the propaganda of crime.”

But Mr Karamuco said Albanian criminals in London were encouraging more young men to join gangs and try to get to the UK.

He said: “Albanian Boys of London are now a subculture in Albania. They show up in expensive cars with English plates, spend a lot of money and invest in restaurants, clubs and hotels. And they advertise on social media with luxury items and make offers to local youth to join them to get rich faster on English soil.”

The issue is gaining recognition, and Alp Mehmet, chairman of Migration Watch UK said: “I agree with Professor Karamuco about co-operating. But we have to be both ruthless and determined if we are to succeed.”

“The National Crime Agency has long voiced concern about Albanian gangs and their increasingly leading role in criminal activity in the UK.”

The Home Office said: “The UK Government works with the Albanian government on a range of issues, including the signing of a historic agreement to remove Albanian nationals with no right to be in the UK in 2021. We have since removed nearly 1,000 Albanian offenders.”

The NCA said: “We work collaboratively with a range of international partners including those in Albania.”

More than 5,000 Albanians have reached Britain across the Channel this year. Half of 600 arrivals on Wednesday were from Albania.