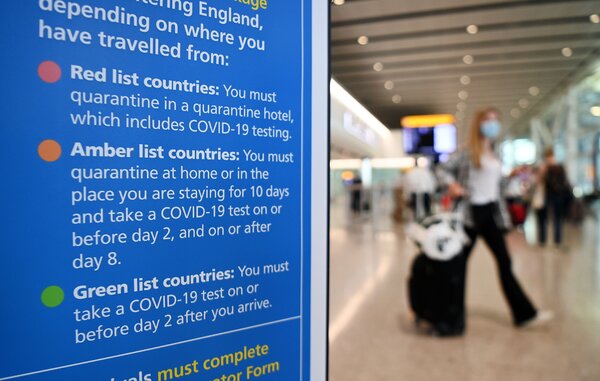 British medical officials announced Friday that fully vaccinated travelers returning from France must continue to quarantine because the Beta variant’s presence there poses a threat.

Travelers arriving from France must quarantine for five to 10 days, regardless of vaccination status, the British health ministry said.

On Monday, travelers from other European nations that Britain had flagged on its medium-risk amber list no longer have to quarantine. Most virus-related restrictions in England will be lifted, including allowing pubs and restaurants to operate at full capacity and nightclubs to open their doors. Curbs on the number of people who can meet indoors, generally limited to six, will also be lifted.

“With restrictions lifting on Monday across the country, we will do everything we can to ensure international travel is conducted as safely as possible, and protect our borders from the threat of variants,” Health Minister Sajid Javid said, according to the Reuters news agency.

While attention has been focused on the threat from the Delta variant, which is now dominant in Britain and France as well as the United States, scientists are also concerned about the Beta variant because clinical trials of vaccines are showing that they offer less protection against it than other variants. The Beta variant was first identified in South Africa in December.

The presence of Beta in France remains relatively low, according to GISAID, an international open source database: It accounts for 3.4 percent of new cases over the past four weeks.

Some research has shown that the AstraZeneca-Oxford vaccine, the backbone of Britain’s inoculation campaign, has been less effective in preventing mild and moderate Beta cases. In February, South Africa halted use of the vaccine over those concerns.

In France, President Emmanuel Macron on Monday announced new vaccination requirements, including mandatory inoculation for health care workers and proof of immunization or a recent negative test to enter restaurants and cultural venues.

But it was highly uncertain whether the measures would be enough to avoid a fourth wave of the virus powered by the fast-spreading Delta variant, which already accounts for about half of new cases in France.

Mr. Macron’s announcement came just three days after nightclubs reopened for the first time in 16 months, which many believed had symbolically signaled the completion of France’s protracted efforts to emerge from the pandemic. But the new measures dashed hopes of a return to a prepandemic normal and of a smooth summer vacation season.

British travelers, after enduring a miserable winter and a four-month national lockdown, are finding it difficult to visit some of their favorite summer destinations. In June, British tourists had to scramble to leave Portugal ahead of a quarantine deadline, after London changed travel rules for the country over concerns about the Delta variant.