Brazilian President Jair Bolsonaro has told a reporter: “I want to punch you in the face”, after being quizzed about his wife’s finances.

He made the remark after facing questions about bank deposits in the account of First Lady Michelle Bolsonaro by a former aide to one of his sons.

“I want to punch you in the face, OK?” the president replied to the reporter from O Globo, according to audio released by the Brazilian newspaper. 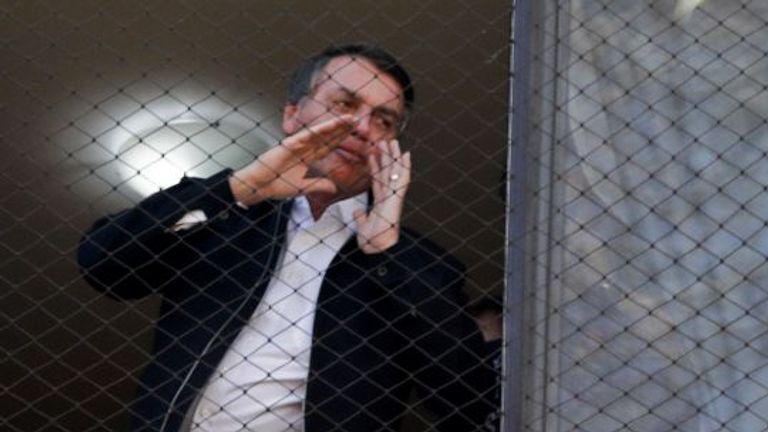 He was an aide to Senator Flavio Bolsonaro, the president’s eldest son, when he was a member of Rio de Janeiro’s legislative assembly.

Mr Queiroz is under arrest in an investigation into bank deposits made at the time amounting to 1.2 million reais (£163,000).

Questions about Mr Queiroz have continued to hound the Bolsonaro family in an investigation that has appeared to annoy the president and dent his promise not to tolerate corruption.

The journalist who questioned Mr Bolsonaro was reportedly part of a group that met the president after his regular Sunday visit to the Metropolitan Cathedral in Brasilia.

The president ignored protests from other journalists after the remarks and left without making further comments, according to reports.

Mr Bolsonaro has faced criticism after spending months downplaying the severity of coronavirus, which he has dismissed as “a little flu”.

He tested positive for COVID-19 in July, before his wife contracted the disease last month.

Brazil has the world’s second highest number of recorded coronavirus cases and deaths, behind the US, according to Johns Hopkins University, which is tracking the outbreak.

More than 3.6 million coronavirus cases have been recorded in Brazil, with more than 114,000 deaths.