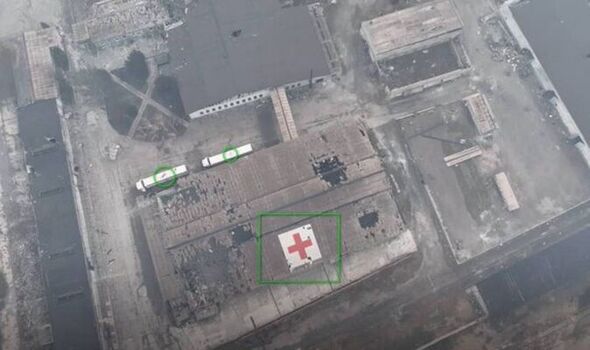 Yesterday’s attack by Russian fighter jets and artillery in the besieged port city of Mariupol was dubbed a war crime. And Chernihiv also endured a “colossal attack”, less than a day after the Kremlin vowed to pull back from the city and Kyiv.

The Prime Minister told MPs the UK was “certainly looking at going up a gear in our support for the Ukrainians as they defend themselves”.

He said there was a “humanitarian catastrophe” in Mariupol and “the question is, can we help the Ukrainians relieve Mariupol, if that were possible?”.

He added: “Would armour, would APCs (armoured personnel carriers) be useful for them [or] armoured Land Rovers? We are certainly looking at that.”

Mr Johnson told the Commons Liaison Committee relieving Mariupol would be a “great thing to do”, but it was going to be “very, very tough”.

He added: “What’s happening is absolutely tragic. If we could think of an easy solution, we’d do it. But we are, as everybody knows, heavily constrained.”

The PM said he understood why US president Joe Biden declared Putin should be removed from the Kremlin, but that was “not the objective of the UK Government”.

He distanced himself from French leader Emmanuel Macron’s attempts to negotiate with Putin, who has warned the shelling of Mariupol will end only when Ukrainian troops surrender.

At least 5,000 and possibly as many as 10,000 people have been killed in Mariupol, according to a senior Ukrainian official.

Moscow’s troops were yesterday accused of abducting more than 70 people, including women and doctors, from a hospital. Meanwhile, satellite imagery released by Earth observation company Maxar revealed the scale the destruction in Mariupol, with residential areas reduced to rubble.

They also show Russian artillery cannon in firing positions on the outskirts of the city. But a Western intelligence chief said Putin feels “misled by the Russian military” and has lost faith in his top officials.

It came as Russia started to reposition 20 per cent of the forces around Kyiv, the Pentagon said. Putin’s troops have also begun to pull out of the Chernobyl nuclear power site after seizing control last month.

Pentagon spokesman John Kirby warned that Russia will redeploy troops elsewhere. He said: “We all should be prepared to watch for a major offensive against other areas. It does not mean the threat to Kyiv is over.”

In the UK, campaigners urged the Government to cut red tape as figures showed just 2,700 visas have been granted under the Homes for Ukraine scheme, despite applications reaching 28,300.

While other European countries have waived checks, Britain retains a visa requirement on security grounds.

But Mr Johnson said: “We have just been hearing about modern slavery, about sexual trafficking, about children, about gangsters who might be trading in evacuees. There will be people coming from that war zone who may not be entirely who they say they are.”

Four million people have fled Ukraine since the invasion on February 24.

RUSSIAN oligarchs have been banned from having their jets, helicopters and ships repaired in the UK under sanctions targeting their “luxury toys”.

Sanctions have also been ramped up against Eugene Shvidler, a billionaire oil tycoon with close business links to Roman Abramovich and Oleg Tinkov, the founder of Tinkoff Bank.

Transport Secretary Grant Shapps said the reforms would “deprive oligarchs access to their luxury toys”. And Foreign Secretary Liz Truss said Putin and his elite “have been surprised by the strength” of the UK’s sanctions.

She added: “We will continue to ramp up the pressure so long as Russian troops are in Ukraine, targeting not only the businesses of oligarchs but also their assets and international lifestyles.

Meanwhile, Ms Truss is in India today for talks with counterpart Subrahmanyam Jaishankar. The subcontinent has so far failed to join the widespread international condemnation of the Russian onslaught. The Foreign Secretary will say the war underlines the importance of democracies working closer together to deter aggressors.

And she will continue talks on developing defence-related trade with India. Ms Truss said: “Deeper ties between Britain and India will boost security in the Indo-Pacific and globally, and create jobs and opportunities.

“India is an economic and tech powerhouse, the world’s largest democracy and a great friend of Britain, and I want to build an even closer relationship between our two nations.”

TAKE a walk during nice weather near the centre of Kyiv and you might be tempted to forget there’s a war still going on.

Pensioners sit on benches in the sun as dog walkers stroll past. A young man does pull-ups on the outdoor gym set in a corner of the same park.

The air-raid sirens no longer seem to have the same frightening affect on the citizens, and the boom of Ukrainian air-defence batteries could even be mistaken for distant fireworks. Then there’s the rat-a-tattat of small-arms fire but you don’t see anyone being shot.

Yes, there are still plenty of checkpoints on street corners, many of which are not always manned.

And Kalashnikov-carrying soldiers and police are ubiquitous. You get used to these as well.

But like in some dystopian film from the last century, as the camera moves closer, anxiety and unease peek out from behind faces that are otherwise purposely dismissive, stubbornly resolute, even fatalistically unconcerned.

Sometimes the unmasking is prompted by an unusually close explosion, one that seems to shake the earth, setting off a car alarm, although these more often happen at night.

Sometimes the siren itself just sounds more menacing, blares on for longer than usual or is accompanied by all the other sounds of war.

As I approach a long-closed corner shop, one such siren is in progress, and I notice my elderly neighbour stopped near the entrance with two shopping bags at her feet.

She normally looks gruff, hardened by the abundant miseries of a post-Soviet pensioner.

“You know, I don’t know what to do,” she confides shamefacedly, smiling though a face otherwise pale with fear. “I forgot to buy eggs, and now I have to go back to that store.”

We walk in the same direction as I try to be sympathetic. But eventually she makes a decision and turns back toward the store two blocks away, still mumbling as she goes.

Back home, I start checking the news on my phone, which I had just been checking in the park. The Ukrainian president says the army has taken out so many tanks, Mariupol is still holding out.

Moments later, I’m talking to my daughter about volleyball and a boy in her class that she has had a crush on. We talk for an hour and I listen with pleasure to all the details of this 15-year-old’s life.

Then I get a text message from a friend telling me the Russians have renewed an attack on another town outside the capital and that he can hear the firefight from a home he’s hunkered down in. I feel my own mask slip from my face.

It will be dark in an hour or so and it’s time to place the bedding in the corridor of the flat, “behind two walls”, as the authorities in Kyiv advise everyone.

The sirens will rage again, the explosions will go off and in the dark they will be more frightening.

But there won’t be anyone else’s face to see.