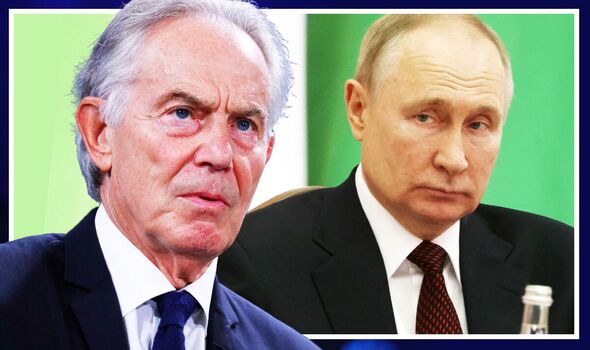 The New Labour Premier spearheaded a western attempt to court the ex-KGB agent as an ally at the “top table” of world diplomacy. Declassified papers from two decades ago show how he pushed for the establishment of a Nato-Russia Council with Putin at the centre.

Mr Blair also visited the new Kremlin chief at a time when he was suspected of human rights abuses in neighbouring Chechnya.

The documents released by the National Archives in Kew, south-west London, include an October 2001 letter to him from media officer Magi Cleaver.

She raised the PM’s forthcoming trip to Russia, Pakistan and India, and reminded him that Putin had invited him to “come to celebrate his birthday.”

Ms Cleaver added: “So we are bringing a set of the new silver No 10 cufflinks as your gift – he will be the first leader to have them.”

His foreign policy adviser John Sawers wrote that the Labour leader “thought it was better to allow Putin a position on the top table”.

Other papers reveal how the Moscow leader was grateful for Blair’s support at the Nato-Russia Council’s first meeting in Rome, in May 2002.

A letter from No 10’s private secretary says: “Putin was fulsome in his praise for the Prime Minister’s initiative to create the Nato/Russia Council.

Another official memo added: “The meeting of the NRC was a notable event. Putin took his seat at the Council table in a scene unthinkable a very short time ago.

“He handled himself with skill and was one of the most impressive performers at the lunch – contributing fluently, confidently and candidly.

“As a further step in bringing Russia in from the cold, this was a remarkable occasion.”

It said newly-elected US President George W Bush was “relaxed and impressive”, and hoped member states would develop “seamless intelligence cooperation” in the next five years.

French President Jacques Chirac “showed (customary) signs of boredom” but jumped up from the lunch table to kiss the hand of US Secretary of State Condoleeza Rice.

Italian PM Silvio Berlusconi wanted Putin to speak for the committee at a summit to defuse the state of near-war between India and Pakistan.

Putin told the group he faced domestic hardliners who saw Nato as “an opponent or an enemy” but“understood the implications” of their new council.

Lord Robertson, Nato’s secretary general, invited members to consider where the international peace initiative “should be in five to ten years time”.

But another document, entitled Putin’s Progress, details how the man who became a byword for war-mongering, intrigue and political assassinations, said one thing and did another.

“Despite the warmth of Putin’s rhetoric about the close links between Russia and the UK, the Russian intelligence effort against British targets remains at a high level.

“The Russian intelligence presence in the UK is at Cold War levels and they continue to try to post active and hostile officers to work against British interests worldwide.”

Last August, the Daily Express revealed how Putin had been allowed to grill Britain’s security chiefs at a special Cobra emergency meeting.

Sources said he looked “steely” and “scary” as he quizzed the heads of MI5 and MI6 and Scotland Yard’s anti-terror chief.

The Kremlin boss was visiting London in October 2005 at a time when Mr Blair wanted him to help the West’s war on terror.

But just a year later, Moscow assassins murdered critic Alexander Litvinenko in a London hotel by feeding him a fatal dose of deadly Polonium 210.