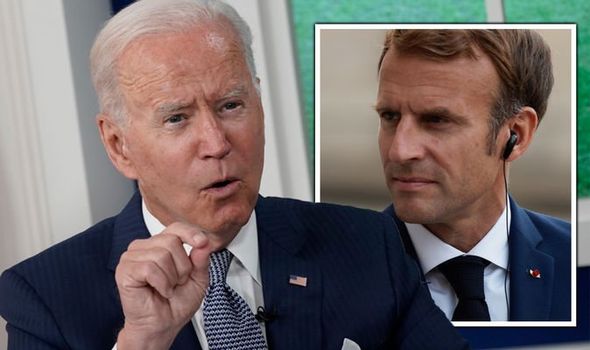 Aukus sees the US and UK help Australia develop nuclear-powered submarines, but caused Canberra to scrap a $90billion (£48billion) contract with France. Paris was outrage by the “snub”, and withdrew their ambassador from Washington as a result of the deal. Now, the US President will meet with his French counter part in October.

In a joint statement following a phone call on Thursday, Mr Biden and Mr Macron said they would meet imminently to discuss Aukus.

It reads: “The two leaders agreed that the situation would have benefitted from open consultations among allies on matters of strategic interest to France and our European partners.

“President Biden conveyed his ongoing commitment in that regard.

“The two leaders have decided to open a process of in-depth consultations, aimed at creating the conditions for ensuring confidence and proposing concrete measures toward common objectives.

“They will meet in Europe at the end of October in order to reach shared understandings and maintain momentum in this process.”

The joint statement also shared Mr Macron will send the French ambassador to the US back to Washington “next week”.

It continued: “He will then start intensive work with senior US officials.

“President Biden reaffirms the strategic importance of French and European engagement in the Indo-Pacific region, including in the framework of the European Union’s recently published strategy for the Indo-Pacific.

“The United States also recognizes the importance of a stronger and more capable European defense, that contributes positively to transatlantic and global security and is complementary to NATO.

“In the framework of their joint fight against terrorism, the United States commits to reinforcing its support to counter-terrorism operations in the Sahel conducted by European states.”