A defiant Israeli prime minister has appeared in court for the first day of his corruption trial claiming that he is the victim of a conspiracy by media, police, prosecutors and judges to oust him.

In a televised statement made just before he entered the courtroom, Benjamin Netanyahu accused police and prosecutors of conspiring to “depose” him.

“The objective is to depose a strong, right-wing prime minister, and thus remove the nationalist camp from the leadership of the country for many years,” he said. 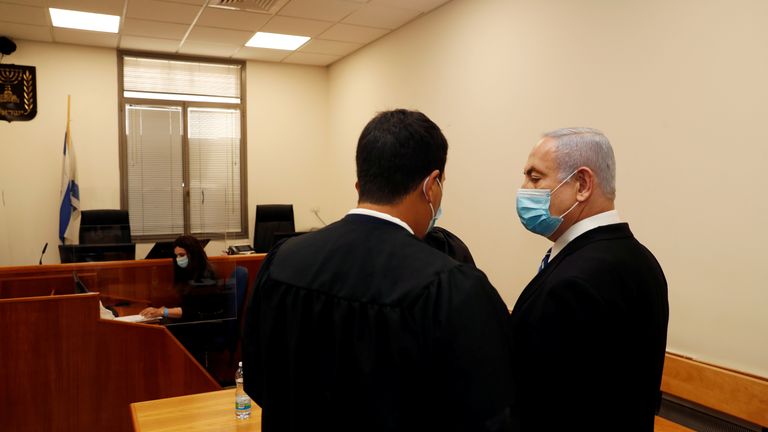 It was the opening day of a trial which could last years and marks a historic moment for Israel.

The three cases against him – Case 1000, Case 2000 and Case 4000 – centre around his relationships with businessmen, media tycoons and a leading Israeli telecoms firm.

Since the charges were first brought against him by police investigators in December 2018, he has sought to avoid prosecution and the spectacle of appearing in the dock, calling the whole process an “attempted coup”.

“They are not after the truth. They are after me,” he said. “[It is a] terror attack against Israeli democracy.”

When the charges were formally announced last year, Israel’s Attorney General said he brought them “with a heavy heart – but wholeheartedly”. 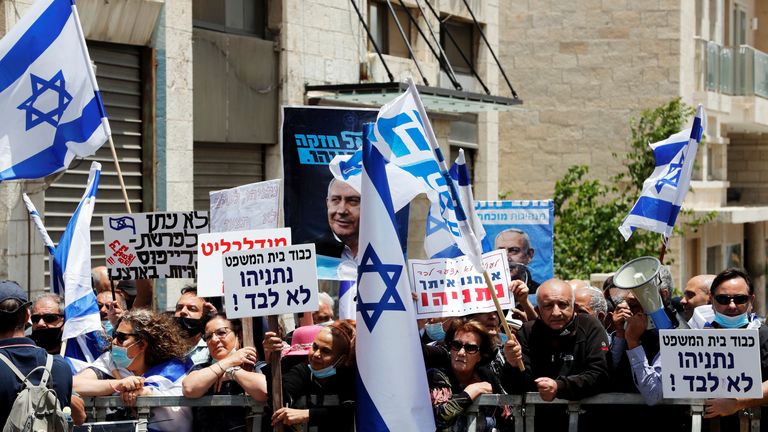 “It is not an issue of left wing or right. Enforcing the law isn’t a matter of choice,” Avichai Mandelblit said.

An attempt by Mr Netanyahu to secure parliamentary immunity from prosecution last year failed. The trial was then delayed by two months in March because of coronavirus restrictions.

The trial has hung over him through three election campaigns, none of which he managed to win outright.

This month the country’s political deadlock was finally broken with the formation of a coalition government deal in which his political rival, Benny Gantz, will take over as Prime Minister in 18 months’ time. By law, a sitting Prime Minister does not have to resign until a final conviction and all appeals have been exhausted and this trial could go on for years. There are 333 prosecution witnesses.

A clause in the coalition agreement means even after Mr Netanyahu hands over power to Mr Gantz in 18 months, he is still not required to resign while on trial because of his position as the “alternate” Prime Minister.

In the courtroom on the first day, Mr Netanyahu and his co-defendants listened to charges against them. Defendants can enter plea bargain at any point before verdict.

Speaking outside court, Anshel Pfeffer, author of Bibi: The Turbulent Life and Times of Benjamin Netanyahu, told Sky News: “This is certainly a pivotal moment in his life.

“For four years, the investigation has been going on very slowly and finally we have reached the moment when he actually has to sit down in court,” Mr Pfeffer said.

“We saw a very telling moment as he went in. For 50 minutes it was the judges and the prosecutors who were in charge of the proceedings. This was a very different Netanyahu sitting on his own on the defendants’ bench doing what he was told. It was a metamorphosis for Netanyahu.”

As a renowned and extraordinary political survivor, many expect Mr Netanyahu, “the magician”, to conjure up some surprises. 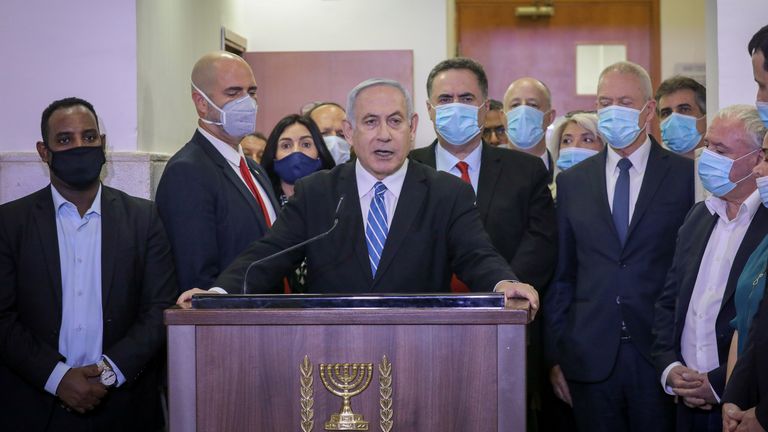 His lawyers complained to the judges that the investigation documents were not presented to them in time. The same complaint was made by the lawyers of the other defendants.