Footage has emerged of the death of a man during protests in Belarus – and his partner, who has seen the video, says it disproves the official account of his killing.

Alexander Taraikovsky, 34, died on Monday in the capital Minsk as unprecedented demonstrations broke out.

The protests in Belarus were sparked by Alexander Lukashenko – widely regarded as a dictator – claiming victory in disputed presidential elections to continue his 26-year spell in power. 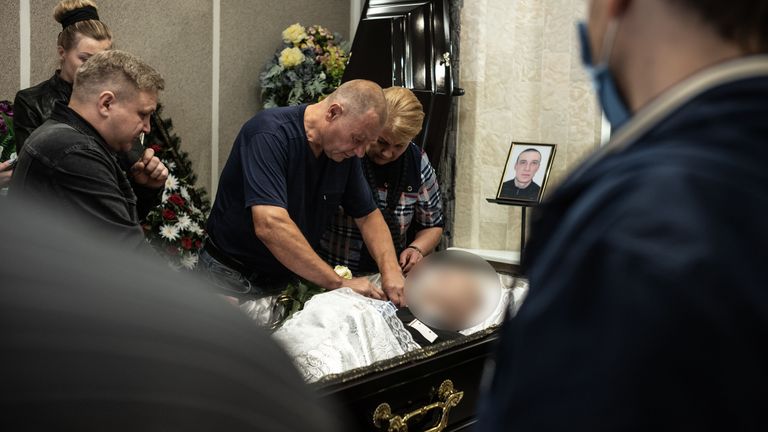 Mr Taraikovsky is claimed to have been shot by police. But the Belarus government said he died after an explosive device that he intended to throw at officers blew up in his hand.

In footage that has now emerged of Mr Taraikovsky’s death, the demonstrator is shown with his hands to his body as blood pours from his chest amid the sounds of explosions and gunshot.

He then collapses in front of a line of riot officers and lays motionless, before the officers walk in a line towards the body and some crowd over him.

After watching the footage, Mr Taraikovsky’s partner Elena German said: “He has nothing in his hand.

“Here is a shot, they shoot, he grabs his chest. Blood. He falls.”

Ms German, who was able to see Mr Taraikovsky’s body in a morgue on Friday, has called for international experts to investigate her partner’s death.

“There is a seam in the chest area – the hole was sewn up, but there is a black bruise; it’s small but we noticed,” she said.

“His hands and feet are completely intact, there are not even bruises. Obviously, it was a shot right in the chest.”

On Saturday, the day of Mr Taraikovsky’s funeral, thousands rallied at the site where the car mechanic died.

Some demonstrators showed bruises they said were due to police beatings.

Further protests, as part of a huge “March of Freedom”, were due to be held in Minsk on Sunday.

The demonstration was expected to culminate on the city’s Independence Square outside the main government building.

There were fears of clashes as a pro-government rally was also planned for Sunday, beginning two hours earlier.

The opposition claimed Mr Lukashenko planned to bus people in from other parts of the country and that they had been coerced into attending.

Last Sunday’s elections have been condemned internationally as unfair, while the Belarusian government has been urged to end its use of violence in its attempts to suppress the ongoing protests.

Meanwhile, Igor Lesgchenya – the Belarus ambassador to Slovakia – became the first of his country’s diplomats to support the demonstrations in his homeland.

In a video message, Mr Lesgchenya said: “In Slovakia, I represent Belarus and the Belarusian people, which in accordance with the constitution is the only source of power in our country.

“I am in solidarity with those who took to the streets of Belarusian cities with peaceful processions so that their voice was heard.”

He added: “I sincerely hope that the future of my country will be based on taking into account the positions of all sectors of society and representatives of various political forces.

“Belarusians have suffered this right.”

The demonstrators in Belarus are calling for main opposition figure Svetlana Tikhanovskaya to be recognised as the winner of Sunday’s presidential election.

Mr Lukashenko was declared the winner with a suspiciously high 80% of the vote, compared with just 10% for Ms Tikhanouskaya, who has now fled to Lithuania.

Ms Tikhanouskaya ran in the election alongside two other women; Maria Kolesnikova and Veronika Tsepkalo.

Both Ms Tikhanovskaya and Ms Tsepkalo entered the contest after their husbands were barred from running for office.