Temperatures across the UK will rocket to up to 20C this weekend, as Britons bask in warm sunshine. According to the latest BBC forecast, the highest temperatures will be found today “across west Wales, south-west England and western Scotland”. However, BBC meteorologist Ben Rich warned that these temperatures may be short-lived as cold air dives into the country on Monday.

Mr Rich told BBC Breakfast viewers: “In a word it is going to be dry this weekend.

“No surprises there after what has been a really dry April.

“The cloud is going to come into play as we head through the weekend, particularly tomorrow when it will turn a bit cooler.

“But generally it is dry because of that high pressure currently centred to the north of the British Isles.

“Into tomorrow we will draw somewhat cooler air in so temperatures are going to dip.” 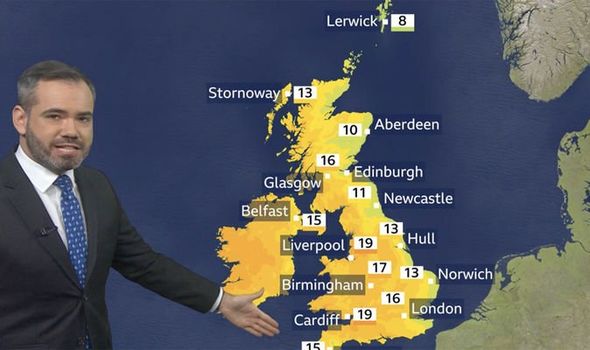 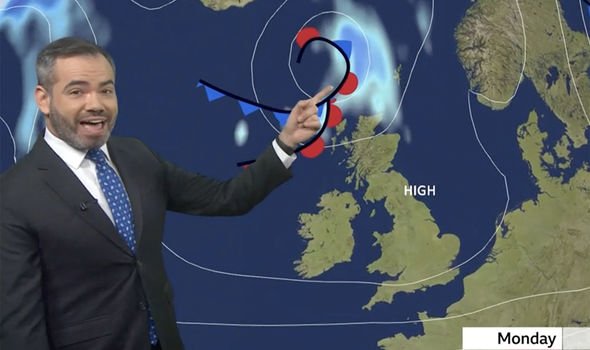 He continued: “We start today with most places seeing some beautiful sunshine. Some low cloud for the eastern coasts of Scotland and north-east England.

“That will turn the sunshine a bit hazy. It is quite windy for the Channel Islands and the south-west of England.

“The highest temperatures will be found across west Wales, south-west England, western Scotland, up to around 19C, possibly 20C.

“If you are a sufferer of tree pollen, there will be high levels for most of us during today. 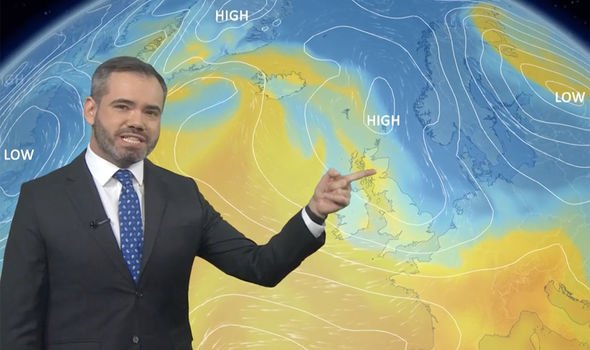 “Overnight, most places will avoid getting below freezing. We may just drop below freezing for some parts of north-east Scotland.

“Tomorrow there is a bit more in the way of cloud but it won’t be completely overcast.

“It will also be quite windy, which comes in from the east. That is where we start to feel the effect of somewhat cooler air.

“There will somewhat cooler temperatures across England and Wales tomorrow, particularly close to the east coast.” 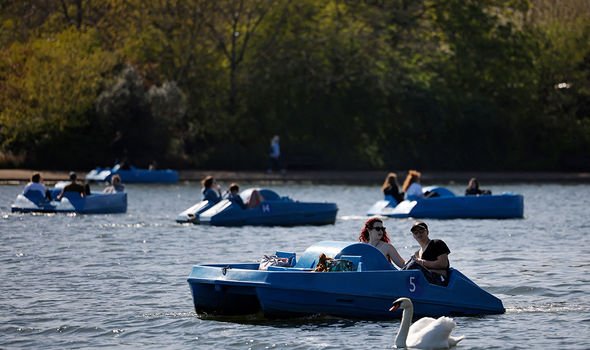 Mr Rich added: “Highest temperatures will be in western Scotland and Northern Ireland, where it could reach 17C to 18C.

“Many people are looking for some rain – gardeners and farmers. The weather system moving in on Monday does promise some rain – but just some. Not an awful lot.

“Temperatures on Monday will be a bit lower again. If anything, for the week ahead, those temperatures have further to fall, so turning a little bit cooler.”

This comes as Britons continue to enjoy the easing of lockdown rules, allowing a return to outdoor mixing.