BBC meteorologist Matt Taylor warned that across Europe, there’ll be a “turnaround in fortunes” as we go through this week. The weather presenter forecast that eastern areas where it’s cool and showery at the moment will turn a bit warmer. In the west, where temperatures are well above the average for the time of year, particularly in France, UK and Ireland, it will turn a bit cooler.

Mr Taylor told viewers: “That heat at the moment is spread particularly across Iberia and southern parts of France.

“Through the night and into Tuesday, we’ll see a few thunderstorms rumble around.

“Some more will return as temperatures build into Tuesday afternoon.

“Much of the northwest of Europe will stay dry.” 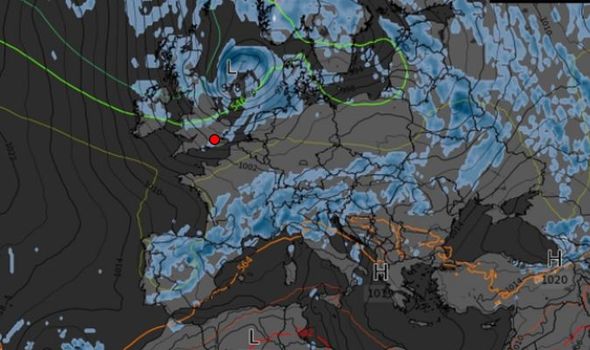 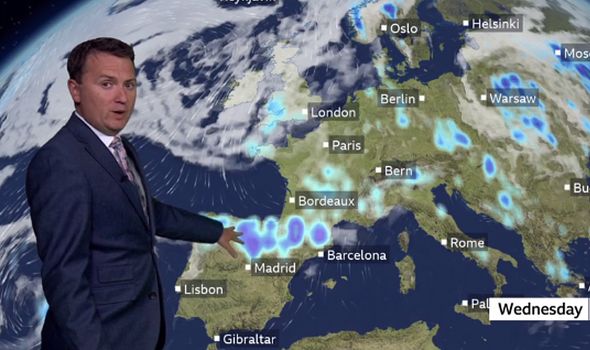 He continued: “The exception is across northern Scotland where changes are afoot.

“Further east, it will be nice enough in the sunshine through the eastern Mediterranean.

“But through northern Turkey and through parts of the Balkans, there’ll be a scattering of thunderstorms.

“There’ll also be some showers and longer spells of rain to the east of Poland across Belarus and the Ukraine.” 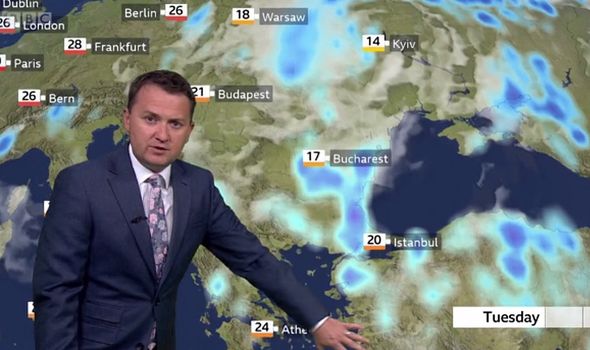 The BBC presenter added: “Temperatures have certainly been building across in Scandinavia.

“Some of the heat will continue across parts of Norway and Sweden for another day yet.

“But that heat is still there for parts of the UK into France, and across Iberia, there are one or two thunderstorms.” 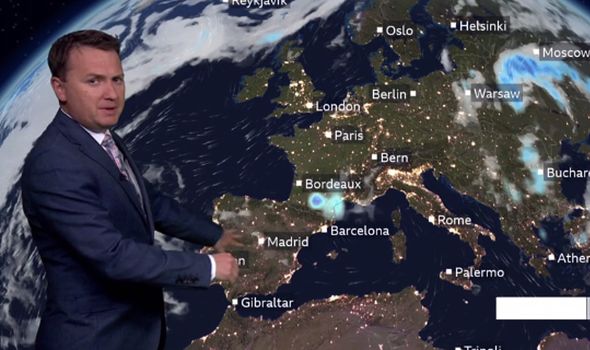 Mr Taylor said: “More will return on Wednesday and they’ll eventually become more widespread as colder air starts to push down as go into Wednesday afternoon.

“Certainly noting the change across the UK and Ireland.

“It’s still a bit showery further east but those showers will gradually ease and temperatures will start to rise.

“We could see some rain return to London potentially, but the big thing will be the drop in temperature back to levels it should be for the time of year. That will happen too in Paris.

“Further east, it set to turn hotter in Athens, and eventually the showers will gradually ease for some, although Berlin is looking quite showery.”