BBC Weather: UK set for ‘a lot of sunshine’

Carol Kirkwood revealed the hottest day of the year so far was recorded on Monday which saw the mercury hit 25.1C in Kinlochewe in Scotland. But Ms Kirkwood said on BBC Breakfast more was to come as she forecasts warmer weather will hit the UK later this week. She added the temperature could reach 26C in some areas, beating the hot bank holiday Monday.

Ms Kirkwood told BBC Breakfast: “What’s been happening overnight is we’ve seen a lot of low clouds come in from the North Sea affecting parts of East Anglia and right the way up to northeast England.

“Actually that will turn back to the coast where some of it will linger through the course of the day.

“We’ve also got a few showers across the Western Isles, the far west of Northern Ireland.

“Through the day what will happen is the weather front producing these pushes back into the Atlantic, so it will be an improving picture.” 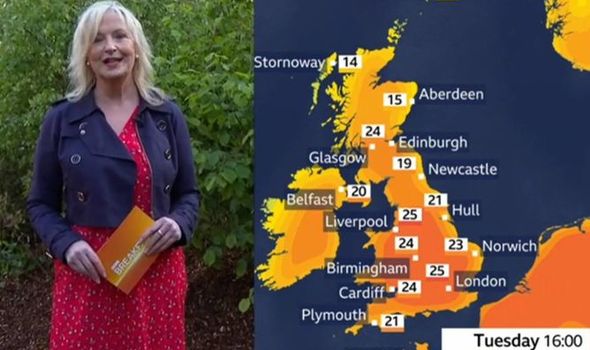 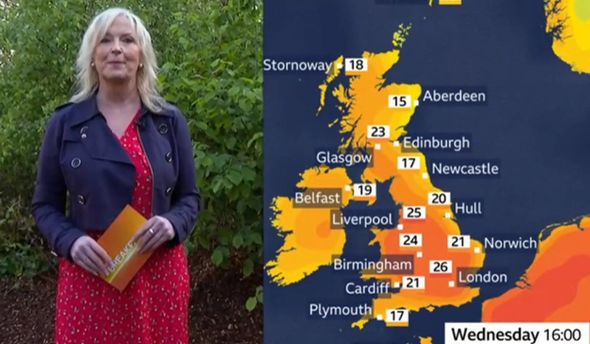 She added: “But a lot of sunshine in between with highs potentially up to 26 degrees today but widely the low to the mid-20s.

“As we head on through the [Tuesday] evening and overnight, a new system comes up from the southwest.

“And by the end of the night, it will be introducing showers into the Channel Islands in southwest England.

“Some of which could prove to be thundery.”

Carol Kirkwood gets colours mixed up during weather forecast 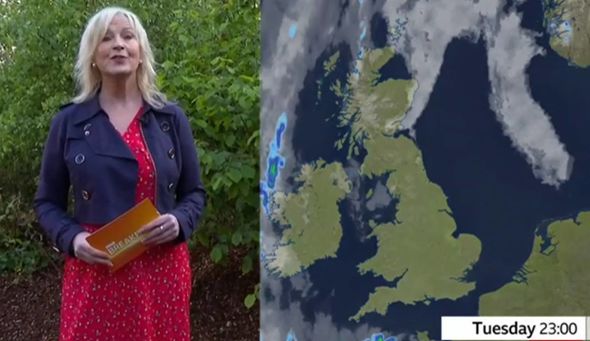 Ms Kirkwood continued: “And at the same time we’ll have more low cloud coming in from the North Sea affecting some eastern parts of Scotland and northeast England.

“And that’s how we’ll start the day [Wednesday] with that low cloud there.

“At the same time, the thundery showers coming into the southwest will drift northwards. 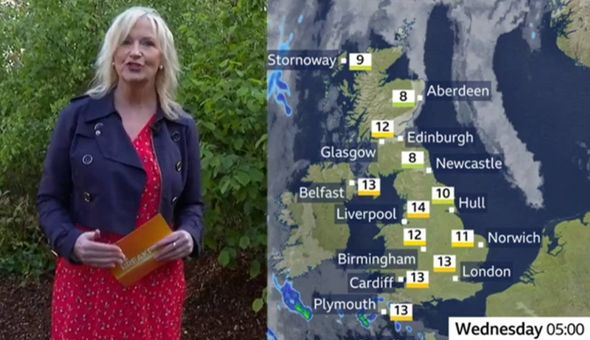 “Tomorrow we could have highs up to about 26 degrees.

“As we head towards the end of the week things turn a little bit more changeable but still a lot of dry warm weather.”

The Met Office adds the warm temperatures could continue for the next two weeks as they say a mini-heatwave may grip the UK for 13 days.

The previous hottest day of the year was recorded in March which was 24.5C.