BBC Weather forecaster Helen Willetts warned gale-force winds will hit the north of the country today bringing yet more heavy showers and lowering the temperatures. The BBC meteorologist claimed temperatures will remain mild on Thursday but are expected to plummet throughout the weekend. She said: “Atlantic fronts brought in quite a bit of rain through Wednesday, heavy and thundery rain around.

“That’s been clearing away through the night but we will be left with a few showers and cool breezy weather.

“It is much milder to start compared to yesterday.

“Already that brighter weather is with Northern Ireland, Scotland and northern England and Wales through the morning.

“But there will be showers, particularly to the north-west and through the Highlands.

“But elsewhere just the odd ones, so certainly brighter then yesterday.

“That rain drags its heels though, that low cloud in southern areas. There will be some appreciable rain before it clears away. 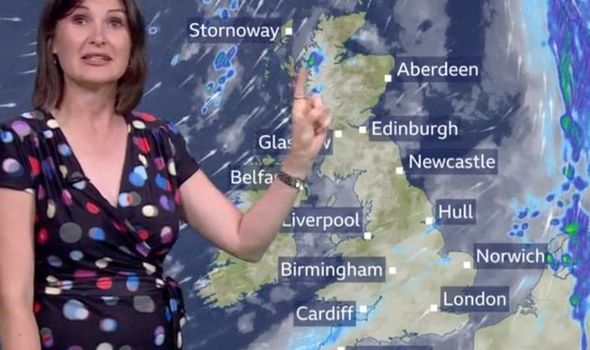 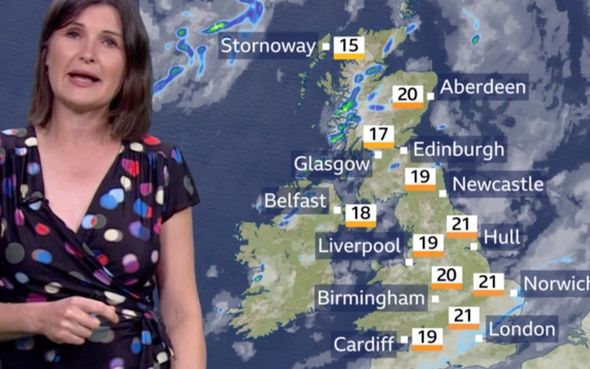 “Still relatively mild for this time of year, temperatures on par with where they should be.

“Still getting into the low 20s but there will be a brisk wind close to gale-force in the north, throwing those showers in through the night, whilst further south pushing our weather front away.”

Weather forecasters have signalled a potential end to summery conditions this week, as the country prepares to enter autumn.

Britons have lucked out over the last few months, with several heatwaves and temperatures in the early to mid 30C range. But this luck may soon run out, with temperatures on the decline.

Over the last two weeks, the weather turned notably sour, as two named storms descended over the UK.

Both storms commanded strong winds and rain and forced temperatures to drop, clearing up much of the summer humidity.

While Met Office meteorologists have not predicted any storms for the immediate future, the bluster will likely remain.

In their latest long-range forecast, which runs from September 6 to 15, they predicted outbreaks of rain and strong winds amid chilly temperatures.

The forecast reads: “The period is likely to start with changeable conditions across much of the UK, with a good deal of cloud, rain and showers in places.

“Generally, temperatures are likely to be rather cool across the country but may be near normal in the south.

“It’s likely that we could see some chilly nights to start off with, but they may gradually turn warmer. 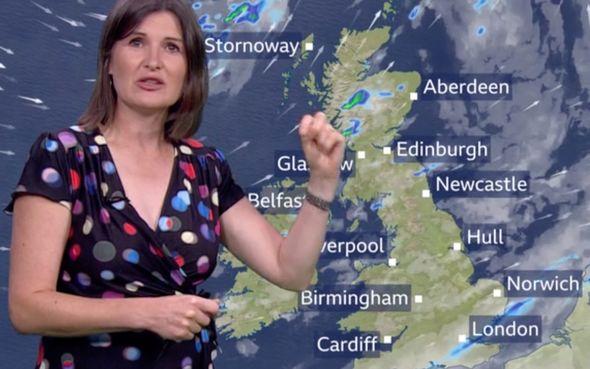 “There is a chance that some rain and stronger winds may develop early next week in the north and west, with the south and east possibly remaining dry.

“For the rest of the week, further outbreaks of rain and stronger winds are possible across the north of the country, with a small chance that the more changeable weather could spread to other areas as well.”

The Met Office has predicted the current weather will likely continue until September 30.

Although confidence is lower this far ahead, forecasters said the country would see more “changeable” conditions.

However, chances of some “warm or very warm spells” will increase towards the end of the month.