BBC Weather meteorologist Carol Kirkwood warned a brisk easterly wind coming in from the North Sea will cause the easter communities to have a chillier start of the week compared to their western counterparts. Ms Kirkwood said the week will kick off with blue skies and mostly dry but the southwest is likely to see a second bout of rain thanks to a weather front moving in from France. The BBC Weather forecaster said: “For many of us today, we’re going to have blue skies. It’s going to be dry and it’s going to be sunny but you will notice a breeze.

“It’s a keen easterly and it’s a chilly one as well, particularly so if you’re along this North Sea coastline. Just one look at those isobars tells you – gusty winds.

“Plus we’ve got a weather front not too far away from the Channel Islands, in the southwest of England, so you’re going to see a bit more cloud and some spots of rain today. But it’ll start to pull away through the course of the day.

“There’s going to be some clouds across parts of Wales, northern England, parts of Scotland, that will tend to disperse rather quickly this morning and then we’re looking at a lot of sunshine.”

Ms Kirkwood warned wind gusts are expected to be rather strong, and the wind will usher in chillier air from the North East across much of the eastern coastline of the UK. 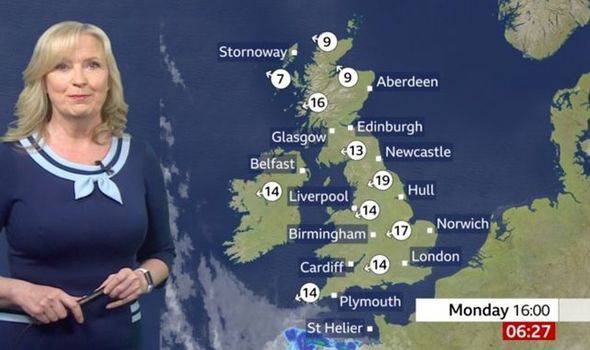 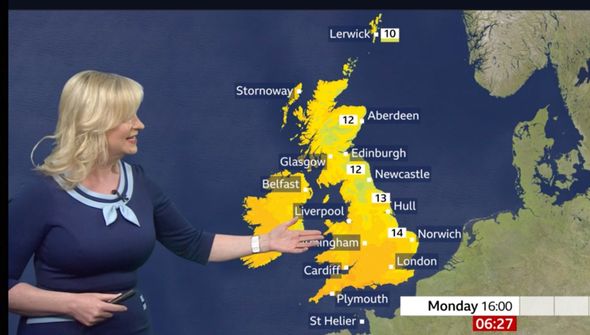 The BBC Weather meteorologist continued: “These are the average wind speeds, the gusts will be higher than that for some of us, particularly further south, we’re looking at 35mph-40mph.

“It’s going to feel colder along the North Sea coastline than will do as you come in. The further west that you are across England and Wales, the higher the temperature. But 19C in Cardiff, 16C in Glasgow.”

The Channel Islands will be taking in another round of heavy rain while the UK experiences yet another cold night. 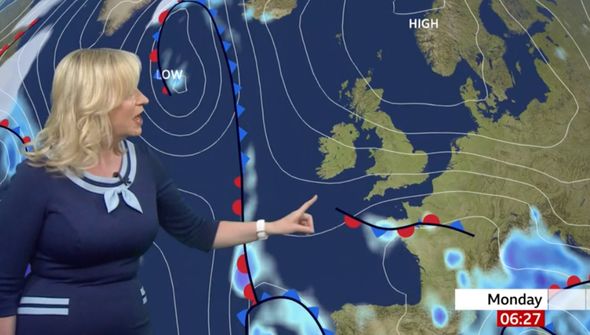 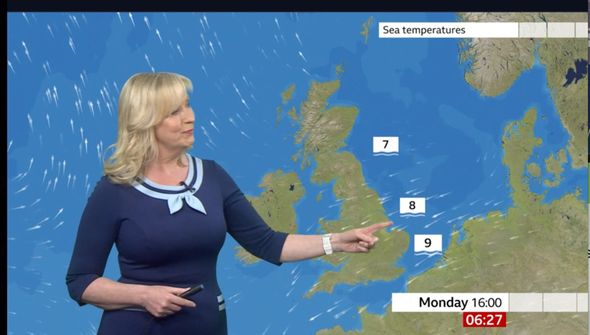 Ms Kirkwood said: “As we head into the evening and overnight, it looks very much like the weather front across France is going to take another swipe at the Channel Islands and the southwest of England, bringing in some more rain.

“There’ll be still some cloud around, similar cases to the night just gone. And it’s going to be a cold night in parts of Scotland and northern England, cold enough for a touch of frost. Further south you shouldn’t have those issues.

“Into tomorrow, we see the cloud and the rain into the southwest and the Channel Islands pull away to the west and, again, it’s going to be another dry day, another sunny day.

“But still, that keen, easterly wind is with us so it’s still going to take the edge off the temperatures down this North Sea coastline. Move further west, the temperatures will be higher.” 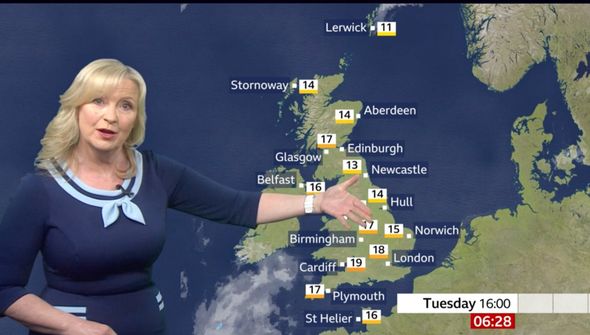 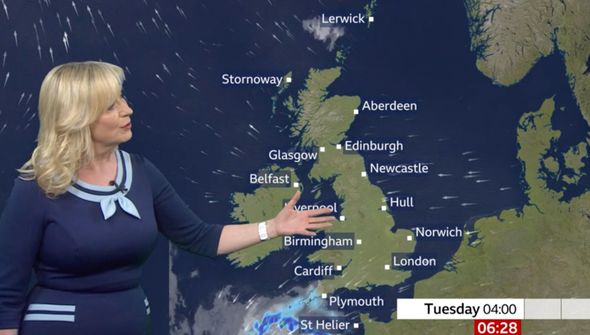 The BBC Weather forecaster also said temperatures are expected to pick up again later in the week, with Thursday likely to be the warmest day.

She added: “As we move from Wednesday into Thursday, the high pressure that’s been dominating our weather starts to weaken, isobars start to open which means it’s not going to be as windy.

“And with less of a wind, it’s not going to feel as cold. So Thursday in some parts could the warmest day of the week.”

Despite the dry weather forecasted for most of the week, the Met Office issued a series of flood alerts covering the River Avon, the River Coln, the River Kennet, the River Pang, the River Whitewater and the River Lambourn because of rising groundwater levels.