Carol Kirkwood told BBC Breakfast viewers temperatures are set to surge dramatically this week, reaching highs of 18C in some areas. The BBC Weather forecaster said the high temperatures will be courtesy of low pressure and a Spanish storm that will reach the UK on Wednesday. She said: “Tomorrow our weather front moves steadily eastwards eventually clearing, it will be windy particularly in the south-east quarter and particularly on the coast. But low pressure is not far way. In between we’re pulling in this south-westerly wind, hence the higher temperatures.

“It’s going to feel milder tomorrow if you’re out of that rain.

“So we start with rain in the central area, eventually moving to the North Sea.

“It could slow down in the early afternoon.

“We still have the rain in the north of Scotland with gusts to gale force across the northern isles and still some showers coming in to western areas.

“Some of those will merge to give heavier or persistent rain and also you can hear the odd tumble of thunder.

“But look at the temperatures, 10C in the north to 17C in parts of Manchester, London and Cardiff.”

Later in the week, Ms Kirkwood claimed a Spanish weather storm will bring more heavy rain showers to the south of the country, keeping temperatures in the high teens. 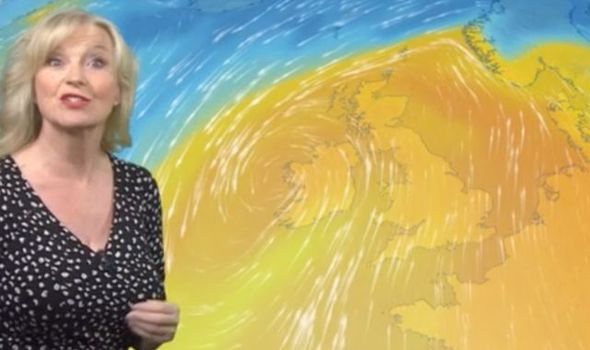 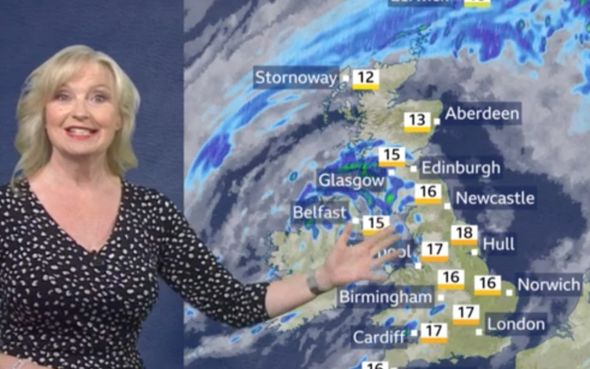 But the warm weather will not last very long as freezing air from the Arctic will sweep over the UK in a northwesterly direction at the end of October, bringing wintery weather with it,

Parts of Scotland and Northern Ireland have been highlighted as the places likely to be hit by snow in the latest warning.

It comes after Met Office predicted wintry weather in its long-range forecast between Tuesday, October 27 and Tuesday, November 10.

The forecast said: “Confidence becomes low towards the end of the month.

“However, the early part of the forecast period will likely see a gradual transition to a generally more unsettled pattern across the whole of the UK.

“Spells of rain and showers are likely, with these turning wintry over high ground in the north and northwest.

“There may also be the odd settled spell at times during this period, but they are likely to be short-lived.

“Temperatures likely to stay at or just below average throughout.” 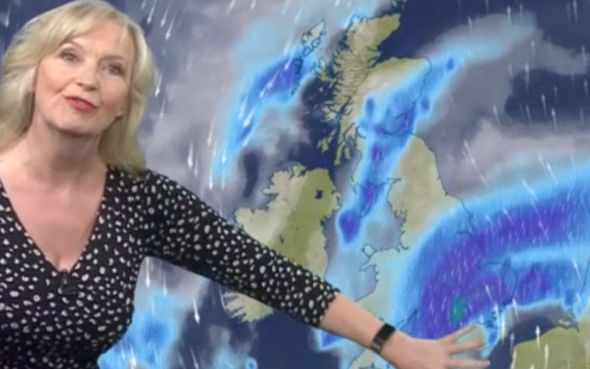 Meanwhile, as the UK approaches Christmas Met Office forecasters predicted there would be overnight fog and frost in the fortnight from November 1 to November 15.

It said: “Confidence is low for this period, but the generally unsettled wet and windy theme is expected to gradually transition to a more settled picture through early November, especially in the south of the UK.

“Elsewhere, showery and windier conditions may remain more prevalent in the north.

“Temperatures may dip slightly below normal in the more settled periods, allowing for an increasing likelihood of overnight frost and fog developing.”