Carol Kirkwood told BBC Breakfast viewers most people in the UK will see some heavy showers and thunderstorms this week. The mercury will continue to hit highs of 35C for some in the south-east, and it will feel muggy and “oppressive” overnight. The BBC Weather forecaster said: “It’s going to feel oppressive, especially the furthest south you travel.

“Temperatures in London getting up to 34C or 35C. In the Midlands around about 29C or 30C.

“But more comfortable as we move further north and west.

“Through this evening and overnight thunderstorms will continue to move northwards and become more widespread across northern England and Scotland.

“It’s also going to be a warmer night in Scotland than the one just gone and we will still have some mist and fog around the western south coasts. So another sticky night to come.

“Tomorrow, our thunderstorms push up into the northern isles but there will be a greater risk of seeing them across England and Wales.

“Particularly the east of Wales and the Midlands. 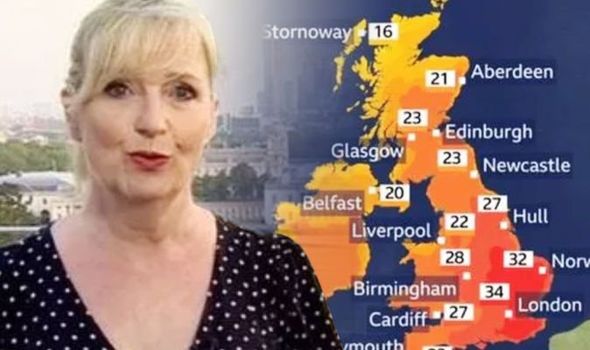 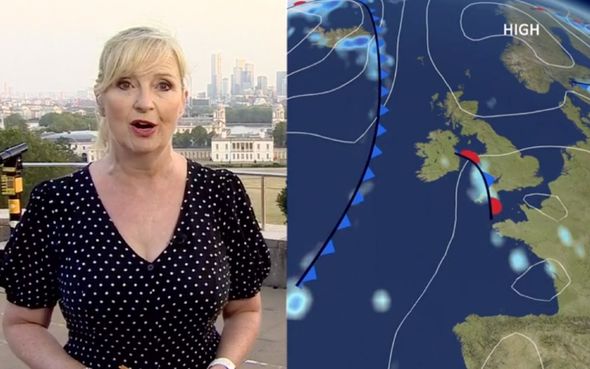 “The east coast will feel a bit cooler but still temperatures up to 35C at the highest and it will feel more humid in Scotland tomorrow.”

The Met Office has even issued a “danger to life” warning for a number of areas across the UK starting from tomorrow.

Some homes and businesses are likely to be destroyed by incoming floods, lightning and hailstones, forecasters have warned.

They wrote: “Where flooding or lightning strikes occur, there is a chance of delays and some cancellations to public transport.”

However, despite the upcoming thunderstorms, it appears the hot weather will continue until at least the middle of September according to the latest long-range forecast.

According to AccuWeather, temperatures highs until the end of August will remain in the 20s.

The forecaster also predicts the warm temperatures will stick around until September 11.

It suggests that from August 23 the UK will experience mostly sunny conditions, right up until September 9.

AccuWeather also predicts a slight dip in temperatures between September 11 and September 13 with highs of 19C, before thermometers return to reaching highs of 21C from September 14 to 17 with the forecast, once again, mostly sunny.

During the current heatwave, Public Health England and the Met Office issued a warning to look out for others as temperatures soar.

Ishani Kar-Purkayastha, a consultant at Public Health England, said: “This summer, many of us are spending more time at home due to COVID-19.

“A lot of homes can overheat, so it’s important we continue to check on older people and those with underlying health conditions, particularly if they’re living alone and may be socially isolated.” 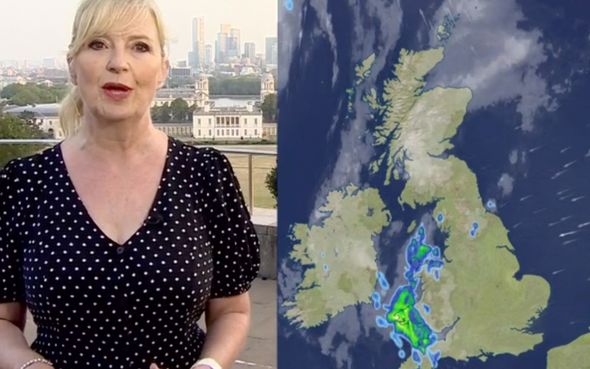 News the weather will remain sunny well into September comes just hours after experts warned a second lockdown could be implemented next month.

Sir David King, a former scientific adviser to the government, warned a second national lockdown may have to be imposed next month.

He warned another UK wide shutdown could be needed in September unless the Government sorts out its ‘Test and Trace’ policy this month.

He said the reopening of schools is likely to boost the R rate, the number of people each COVID-19 patient infects, by 0.5.