BBC Weather: Amber warning issued for snow across the UK

The UK is bracing itself for snow chaos this morning, with warnings that up to 10cm could blanket parts of England within hours. The Met Office has issued an amber weather warning for snow across parts of eastern England, with 5-10cm of snow expected and fears of “significant disruption”. BBC meteorologist Louise Lear warned that there will be snow “widely” across England today.

Large parts of the UK, including Scotland, northern England, the East Midlands and the South East, are also covered by yellow warnings.

Ms Lear told BBC Breakfast: “The snow is a little bit further south today. We even have some wet snow falling across Greater London at the moment.

“But pretty much what you have at the moment you are not going to keep for most of the day, because we have this weather front pushing in quite quickly today.

“On the leading edge there is some snow, that will cause some issues into East Anglia but behind it a southwesterly wind means milder air for all of us.

“Just East Anglia, and down into Essex and Kent will be staying on the cold side today.”

JUST IN: London snow map: What time will it snow in London? Latest charts 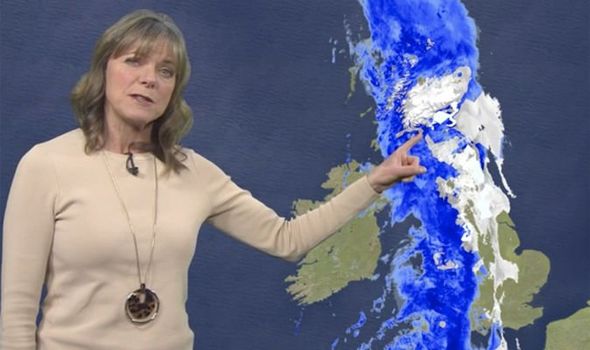 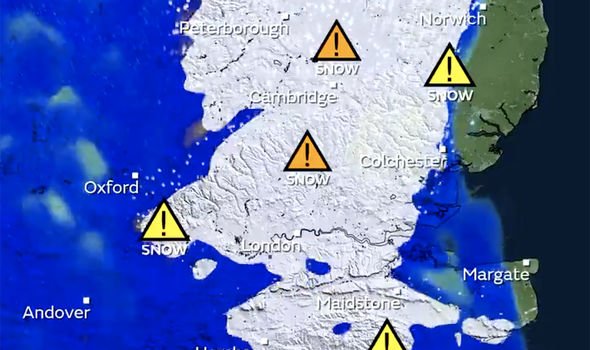 She continued: “We have further snow so far this morning through Scotland and northern England.

“Here temperatures have fallen down to -7C in Northumberland so ice could be an issue as well first thing.

“The Met Office has issued an amber warning for East Anglia because we could see some significant accumulations developing as we go through the day.

“Widely we could a couple of centimetres, but 5-10cm is not unlikely here. That warning stays in force until the early afternoon. 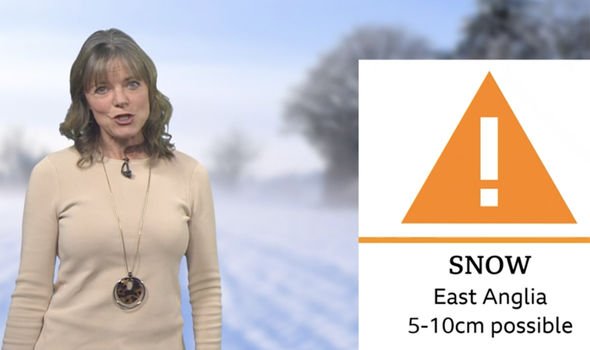 “As the cloud and the rain and the wintry mix eases its way eastwards, it will be sunshine for many.

“There will be a scattering of showers but generally temperatures will be sitting on the mild side due to that southwesterly wind, with 8C to 11C.

“However, East Anglia will be at 3C to 4C at its very best.”

She added that next week, “we have low pressure returning which will bring wet and windy weather and unsettled conditions for many”.

The lowest temperature recorded on Friday was -11.8C in Ravensworth according to the Met Office. 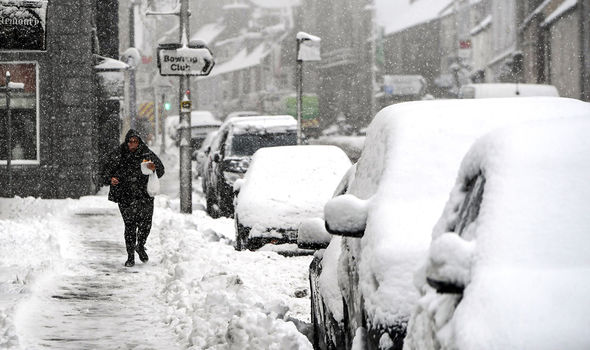 Temperatures are expected to hover around freezing during the day in areas where snow settled, according to the Met Office.

Met Office meteorologist Luke Miall said: “The east of England is the area where we can see the highest impact from the snowfall.

“In terms of the amount of snowfall, we’re likely to see in the region of one to three centimetres quite widely within that area but potentially as much as five to 10 centimetres in some places.

“That’s a fairly decent amount of snow and enough to cause some fairly significant disruption.

“A snow event could cause significant disruption to even those essential trips that people need to make, so we are advising the public to stay up to date with the latest information on the warnings as the weather develops.”