Cyclone Seroja tore across the Western coast of Australia overnight, with wind speeds of up to 170 kilometres per hour. Homes and local infrastructure were destroyed on the western coast – particularly in the towns of Kalbarri and Northampton.

The storm spread across part of Australia that rarely sees these types of cyclones.

Seroja was upgraded to a category three tropical storm just as it made landfall at Kalbarri.

About 70 percent of all homes in the town were damaged, according to ABC.

Photographs shows houses with their roofs ripped off, and power lines scattered across roads. 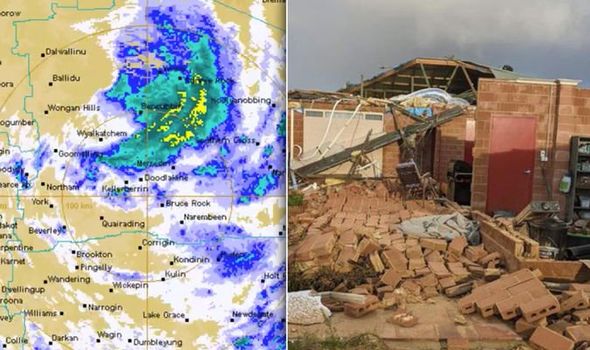 “Crews are still assessing the damage and it is not currently safe to go outside because of hazards,” a Western Australia emergency services department spokesperson told AFP.

Thousands of residents in Western Australia were left without power throughout the day on Monday, as a result of Cyclone Seroja.

It was the first cyclone to hit some of the affected areas since 1956, according to The Bureau of Meteorology.

“Severe Tropical Cyclone Seroja crossed the WA coast just south of Kalbarri, near the town of Port Gregory at 8pm Sunday evening as a Category 3 cyclone with winds gusts of 170 kilometres per hour observed in Kalbarri,” it said.

“The final severe weather warning for southeastern parts of the State have been now cancelled and no further severe weather from this system is expected.

“Widespread damage has been reported including homes destroyed and power outages. Many people within the Bureau worked very hard to prepare Western Australians for the likely impacts. While we were able to provide accurate and timely forecasts seeing the devastation from Severe Tropical Cyclone Seroja is distressing.

“We will continue to serve the communities affected and work with all relevant agencies to help with recovery efforts as we can.”

Social media users sent their best wishes to the people of Western Australia whose lives have been impacted by the rare storm.

One Twitter user said: “Some devastating footage coming out of #Kalbarri showing the extent of the damage. Amazing that no serious injuries are being reported, which is fabulous news! #Seroja #CycloneSeroja.”

Another said: “Carnage in Kalbarri. I’m sure SES and help will be on the way. Thinking of everybody affected. The whole state will be behind you.”

“Devastated for the people of Kalbarri waking up to substantial damage to their beautiful town,” added another.

“Been there a few times on holiday and adore the place. Hope you’ll all be back up and running again very soon. Take care.”

Cyclone Seroja was downgraded to a low pressure system this morning, the Bureau of Meteorology confirmed.

Severe weather warnings were cancelled as the remnants of the storm moved offshore.

Officials are expected to get a clearer picture of the damage after the authorities fly over the state later today.