The contested Nagorno-Karabakh region, a mountainous and heavily-forested patch of land, is at the heart of a decades-long armed standoff between neighbours Armenia and Azerbaijan.

Under international law, Nagorno-Karabakh is recognised as part of Azerbaijan. But the ethnic Armenians who make up the vast majority of the population reject Azerbaijani rule. They have been running their own affairs, with support from Armenia, since Azerbaijan’s forces were pushed out in a war in the 1990s.

Germany called for an “immediate” halt to the fighting between Armenian and Azerbaijani separatists over the Nagorny Karabakh region, saying the conflict can only be resolved through dialogue.

“I call on both parties to the conflict to immediately stop all hostilities, especially the shelling of villages and towns,” Foreign Minister Heiko Maas said in a statement, voicing “alarm” at reports of civilian casualties.

He urged a return to talks to resolve the dispute over the breakaway region, saying that the so-called Minsk Group “stood ready” to help. 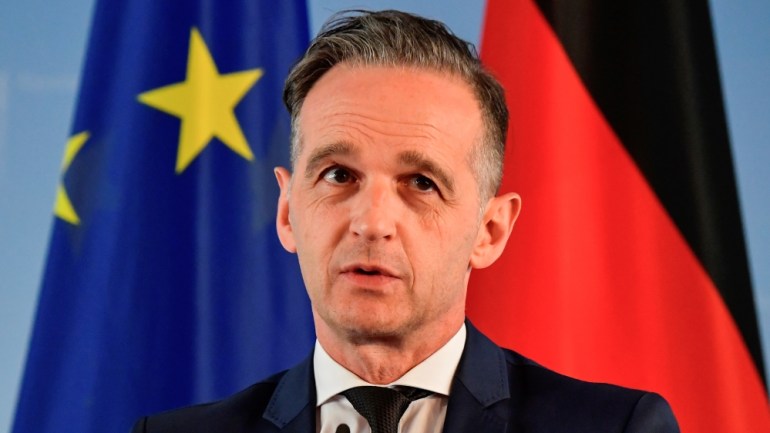 A spokeman for the Azerbaijan presidency told Al Jazeera his country’s goal is to retake all Azerbaijani territory controlled by Armenian forces, namely the Nagorno-Karabakh region.

Hikmet Haciyev, assistant to the president of Azerbaijan and head of foreign policy department, added that Armenia must withdraw from territory it has occupied for the conflict to end.

“Thirty years we are suffering from the Armenian military occupation,” he added.

Azerbaijan said it had captured six of its Armenian-controlled villages in heavy fighting along the frontline of the disputed Nagorny Karabakh region.

“We have liberated six villages – five in Fizuli district and one in Jebrail district,” a defence ministry spokesman told the AFP news agency.

10:50 GMT – Azerbaijan says no need for military mobilisation over Nagorno-Karabakh

Azerbaijan’s army said there was no need for total military mobilisation due to a flare up in tensions with Armenia over the breakaway Nagorno-Karabakh region, since its army is fully staffed.

Earlier, both Armenia and authorities Nagorno-Karabakh declared martial law and military mobilisation due to clashes with Azerbaijan.

France called on Yerevan and Baku to end hostilities and immediately restart dialogue after Armenia declared martial law and mobilised its male population following clashes with Azerbaijan over the breakaway Nagorno-Karabakh region.

Along with the United States and Russia, France is co-president of the Minsk group, which mediates between both Armenia and Azerbaijan.

European Council president Charles Michel has called for a halt to fighting between Armenian and Azerbaijani forces and an “immediate return to negotiations, without preconditions”.

“Military action must stop, as a matter of urgency, to prevent a further escalation,” Michel tweeted.

Azerbaijan’s transport ministry says it has “put restrictions on internet traffic” amid the ongoing military escalation with Armenian forces.

The ministry said the measure was taken in order to prevent “Armenian provocations” following the clashes in Nagorno-Karabakh.

“Armenia violated the ceasefire by attacking civilian locations,” he posted on Twitter. “Turkey stands in full solidarity with Azerbaijan and unreservedly supports its right to self-defense.”

We strongly condemn Armenia’s attack on Azerbaijan. Armenia has once again violated international law and shown that it has no interest in peace and stability.

Turkey stands in full solidarity with Azerbaijan and unreservedly supports its right to self-defense.

“We have information that mercenaries from Turkey and other countries were airlifted to Azerbaijan,” he said.

“The Turkish army is already in Azerbaijan, under the guise of military drills,” he claimed.

Azerbaijani President Ilham Aliyev has vowed victory over Armenian forces in a televised address to the nation.

Aliyev says “there are losses among the Azerbaijani forces and the civilian population as a result of the Armenian bombardment”.

“Our cause is just and we will win,” Aliyev said, repeating a famous quote from Soviet dictator Joseph Stalin’s address at the outbreak of World War II in Russia. “[The] Azerbaijani army is fighting on its territory,” he added. 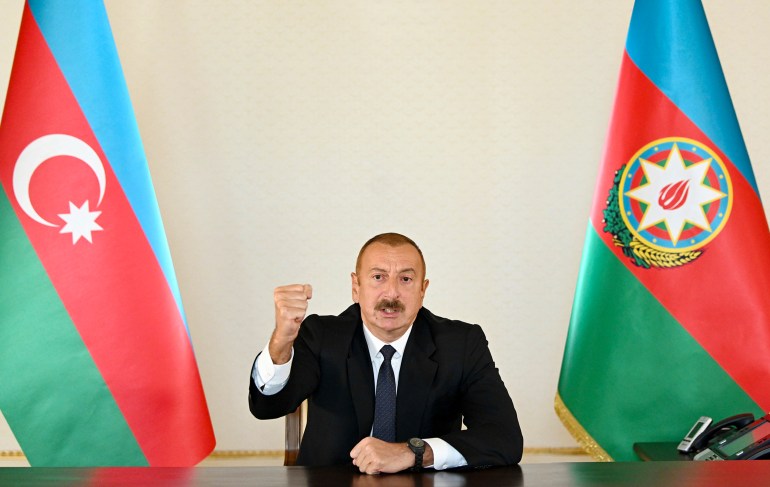 08:39 GMT – Pashinyan: ‘Get ready to defend our sacred homeland’

Armenian Prime Minister Nikol Pashinyan called on his people to defend their “homeland”.

“Get ready to defend our sacred homeland,” he wrote on Facebook, adding “the government has decided to declare martial law and a total mobilisation”. 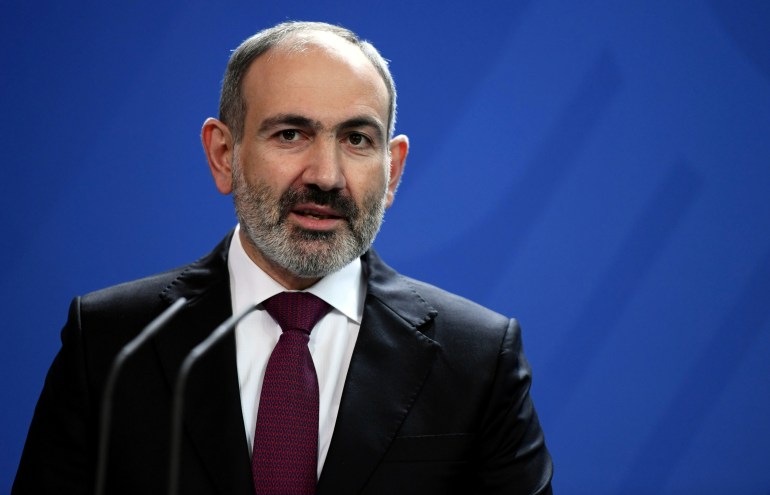