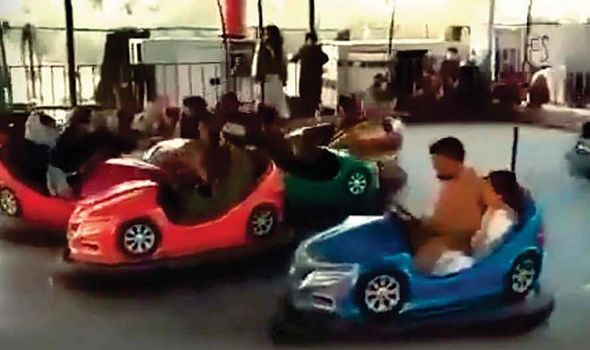 Video footage shows the insurgents crashing into each other in bumper cars and having fun on a merry-go-round in the western city of Herat. Another clip shows a group of fighters bouncing up and down on a trampoline. They scream with laughter when one of them lands heavily, sending the others flying in the air.

Elsewhere in the capital city Kabul, Taliban fighters have been seen playing around on gym equipment in Afghanistan’s Presidential Palace.

It was relinquished to the militants after Afghan President Ashraf Ghani fled the country on Sunday in a transfer of power that stunned the international community.

In the video, the gigging fighters try weightlifting, the treadmill and other exercise equipment.

One man can be seen dangling off a weights machine, while another curls a bar.

Middle Eastern news site Mulhak posted a 30-second clip on Twitter with the caption: “They practice sports in Jim Hall at the Presidential Palace in Kabul.”

Close by, Kabul residents live in fear of revenge killings, brutality and few rights for women.

But despite the Taliban’s return to power causing terror for many, the fighters appear carefree.

They have also stepped up their propaganda campaign ‑ roaming the streets with a microphone and asking ordinary citizens to share how happy they are under the “Talibani rule”.

The terror group has declared an “amnesty” across Afghanistan and urged women to join the government following a day of chaos that saw citizens descend on the airport en masse in a bid to flee their rule.

Enamullah Samangani, a member of the Taliban’s cultural commission, said: “The Islamic Emirate doesn’t want women to be victims.

“They should be in government structure according to Shariah law.”

When the Taliban last ruled Afghanistan from 1996 to 2001, women were forbidden from working. They had to cover their faces and be accompanied by a male relative if they wanted to leave home.

Girls could not go to school after the age of eight. Stonings, amputations and public executions were widely used as punishment.

This time Taliban fighters have reportedly been ordered to maintain discipline and not enter any diplomatic buildings or interfere with embassy vehicles.

But there have been reports of fighters going door to door, marking the houses of prominent women and taking girls as young as 12 as sex slaves.

Grenade Leaders have also attempted to kidnap and forcibly marry women, with local authorities having been asked to produce a list of girls in their area who are aged 12 to 45.

One recent victim was Najia, a mother of four, who was at home with her three young sons in a small village in northern Afghanistan when the Taliban knocked on their door.

They did the same to her mother on each of the previous three days ‑ demanding that she cook food for up to 15 rebels.

Manizha said: “My mother told them, ‘I am poor, how can I cook for you? [The Taliban] started beating her. My mother collapsed and they hit her with their guns ‑ AK47s.”

Manizha said she yelled at the fighters to stop.They paused for a moment before throwing a grenade into the next room and fleeing as the flames spread. Najia later died.

Yet the Taliban has given a stamped statement to the UN Refugee Agency (UNHCR) which assures the organisation it can continue with its humanitarian and relief efforts in the country.

The UNHCR’s Aurvasi Patel said yesterday: “We have not experienced this before. If this actually materialises, then we can certainly stay and deliver and provide humanitarian assistance, which is critical for Afghans today.”

But as the crisis intensifies, Afghans remain terrified despite the Taliban’s reassurances and statements urging people to trust them.

Ms Patel said: “The Afghans are terrified by the history. Right now they have given assurances. But there have been reports of some actions that go against that.

“It is important that the Taliban actually do what they say, not only in word, but in practice.”

John Bolton, who also served as US ambassador to the UN under George W Bush, said: “Right now the Taliban have their smiley faces on because they’ve had good western public relations advice and they won’t get back to slitting throats until everybody’s out of Hamid Karzai International Airport.

“I don’t trust them any more today than we did 20 years ago.”