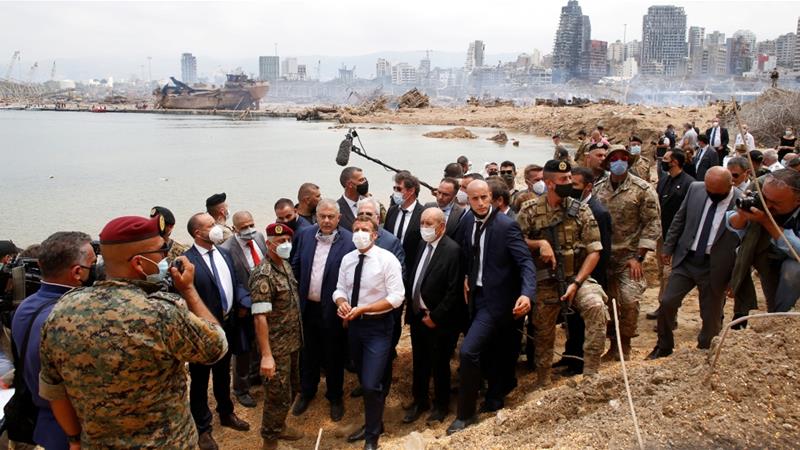 Beirut, Lebanon – In Beirut on Thursday, French President Emmanuel Macron visited the scene of the massive explosion that killed at least 137 people and left some 5,000 wounded.

As he walked through the historic Gemmayzeh neighbourhood with its century-old buildings – many now destroyed or unsafe – he spoke to the victims and consoled people with frayed nerves.

He did this before any local official came there – two days after the massive explosion ripped through the city and upended life here.

“You are sitting with warlords, they have been manipulating us for the past years,” a woman told Macron, who would meet with the country’s top leaders later in the day.

“I’m not here to help them, I’m here to help you,” he replied, before they entered into a long, silent embrace. 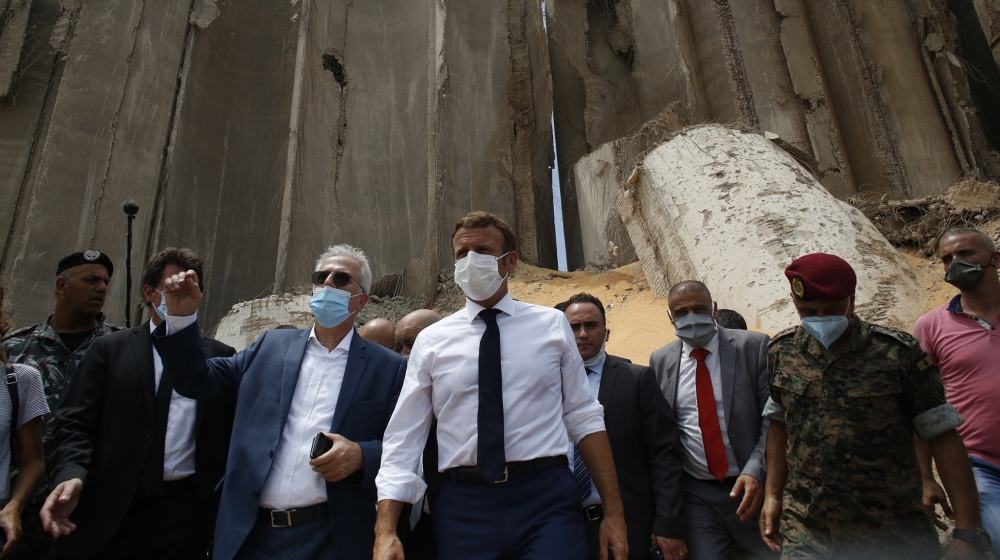 Macron’s short visit to Beirut was heavy with emotion and symbolism. During his welcome at Beirut’s airport with President Michel Aoun, the electricity cut  – a common occurrence in a country with perennial power cuts, but an embarrassing sign of decades of mismanagement.

When Macron went to survey the damage, he engaged with the rescue workers. In Gemmayze, he was surrounded by scores of people who urged him to help Lebanon, but refrain from giving any aid to the country’s ossified political class, many of whom are former belligerents in the country’s civil war that ended in 1990.

“Dont give money to our government,” one man shouted repeatedly. “You are our only hope,” another said.

Lebanon’s Justice Minster Marie-Claude Najem attempted to visit the site later on, but was sprayed with water and pushed out of the area by dozens of protesters who chanted “resign”.

When Najem stopped to try to speak with protesters, their screams blocked out her voice, more water was thrown at her, and she finally turned away.

But protesters seemed to feel like Macron was on their side. “Revolution!” they chanted jubilantly as he walked through the Gemmayze street.

“Michel Aoun is a terrorist,” they added, referring to Lebanon’s 85-year-old president.

In meetings with top officials, Macron “did not mince words; he told them that they need to get their act together and that it can’t go on like this,” a source with knowledge of the meeting told Al Jazeera. “It was extremely frank.”

That air of frankness was carried on to a news conference in the evening, when Macron was asked about comments by Lebanese Prime Minister Hassan Diab that charged the French foreign minsiter, during a visit last month, of having a “lack of knowledge” of government reforms.

“I felt today that the Lebanese people didn’t have knowledge of the reforms, either,” he said.

Several times throughout Macron’s press conference, local journalists clapped for him. After he was done, they harangued him for selfies. One woman began crying as she spoke to him, and he comforted her.

“Sad and awkward. But first time I felt a bit of hope & comfort after this trauma, was when a French leader came to my country & said words that showed he understood my fears & was determined to help me feel secure again,” Twitter user Sara Assaf wrote. “Not one Lebanese leader was able to do the same.” 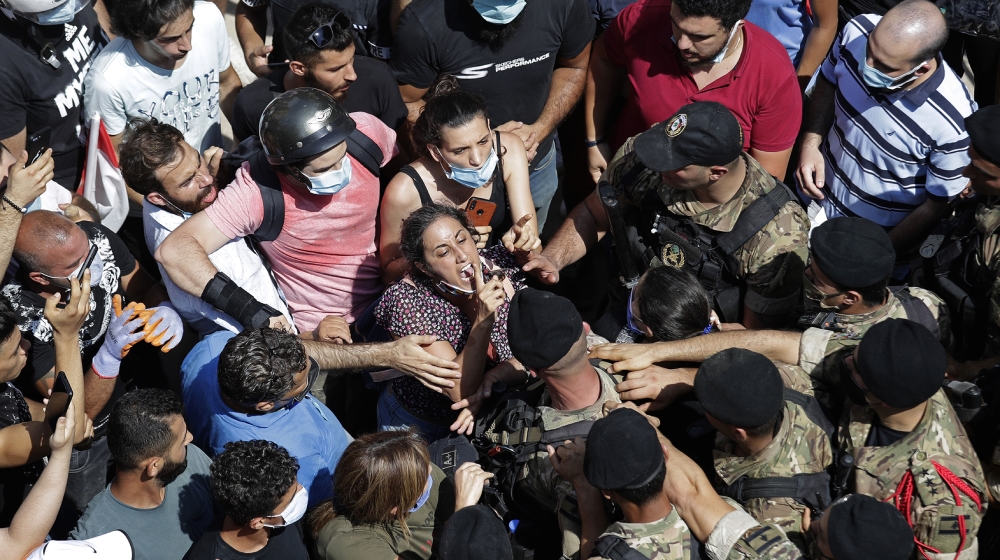 After meeting with top officials, the heads of parliamentary blocs and civil society and independent leaders, Macron called for a “transparent international investigation” into the Beirut explosion.

Lebanon has formed an investigation committee headed by Diab and including ministers and heads of top security agencies to oversee the probe. Macron said that he supports the inclusion of international experts and that he had offered French technical assistance and expertise.

International organisations including Human Rights Watch and Amnesty International have also called for the involvement of international experts, citing a lack of trust in Lebanon’s political class.

Officials have linked Tuesday’s blast to 2,750 tonnes of ammonium nitrate stored at the port for more than six years – a fact seen by many Lebanese as an indictment of the country’s ruling class.

Macron said he would convene an international conference with the European Union, the United States and regional countries to gather much-needed humanitarian aid, including for the displaced, who are estimated to number 300,000.

Beirut Governor Marwan Abboud has said that damage from the blast could amount to $15bn, and Lebanon desperately needs international aid.

Macron promised “clear and transparent governance” of the funds, which he said would be routed directly to the Lebanese people and non-governmental organizations – a major demand of Lebanese weary of systemic corruption.

He also said that he does not rule out implementing sanctions on Lebanese officials if sweeping reforms are not implemented, though he said he prefers to engage with them politically. 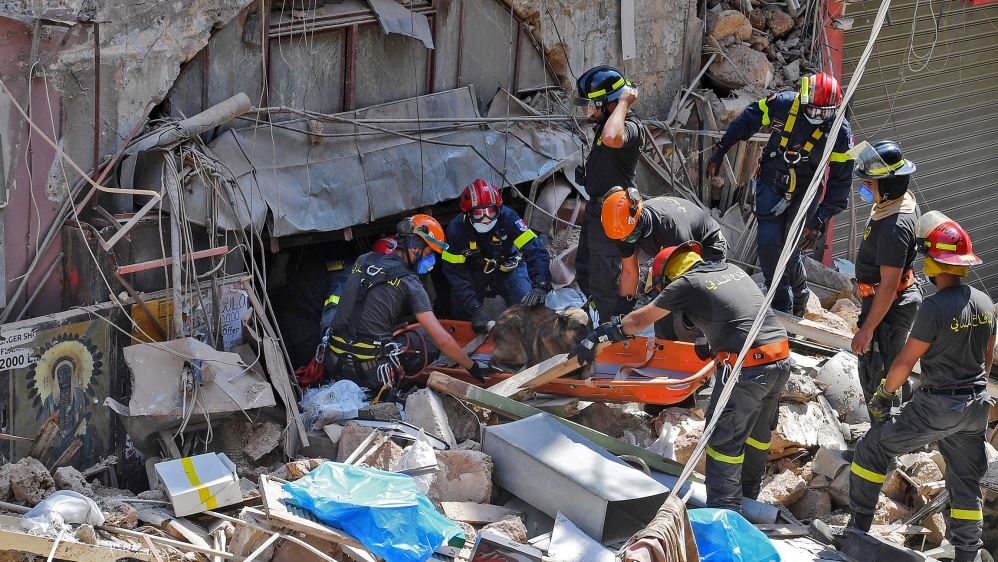 France has organised four donor conferences for Lebanon over the past two decades where over $20bn in funds were pledged to the country for economic development.

At the last one in 2018, the Lebanese government vowed to undertake a host of reforms, including in transparency, public procurement and to the dilapidated electricity sector which bleeds roughly $1.5bn per year.

Macron said that, more than two years later, no reforms had been implemented. Still, he said he’d be back in Beirut in September with a plan to support the Lebanese education system, devastated by the country’s unprecedented economic crisis and the coronavirus pandemic.

The French president called on Lebanese officials to reach a new social pact with the country’s population, saying the current system “no longer has the trust of its people.”

Karim Emile Bitar was part of a group of civil society leaders who met with Macron.

“We congratulated him because he spoke of a ‘Lebanese regime,’ so it was a way of delegitimizing them,” Bitar said “He had words of encouragement for the Lebanese reformers but at the same time insisted that France couldn’t interfere in domestic politics, and so its up to use to organise, close ranks and unify the opposition to ultimately win elections,” he said.

“He genuinely seemed concerned about the Lebanese people unlike the political class here.”