The president of Afghanistan has blamed the rapid withdrawal of western forces for an increase in Taliban offensives in parts of the country.

Since the US, UK and other NATO troops started to move out of Afghanistan earlier this year, the Taliban has rapidly advanced and violence has increased.

The militant group has been targeting provincial capitals and is currently engaged in areas including the capital of Helmand, Lashkar Gah, near where Camp Bastion used to be. 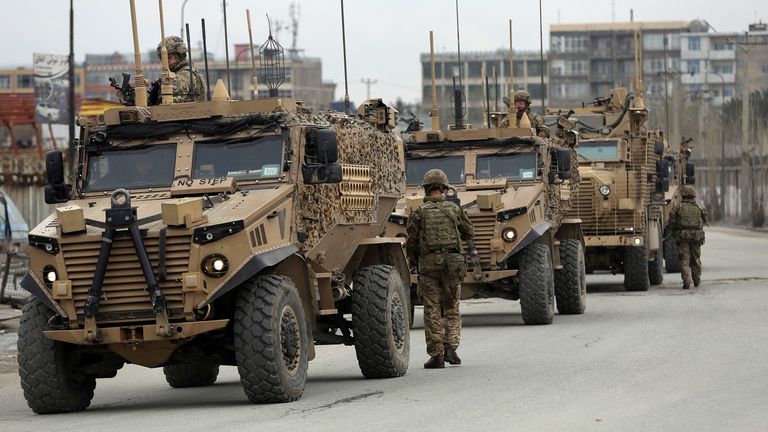 It has also laid siege to Herat, in the north west, and the southern city of Kandahar.

Speaking to the Afghan parliament, President Ashraf Ghani said: “The situation which we are facing is due to the sudden decision [withdrawal].

“I told the American president that I respect your decision, because it was his decision, but I knew that this decision will have some consequences and the crisis management will be put on Afghans.”

He added: “This (peace) process created doubt and ambiguity and its result is the situation which we and you see.

“I want to repeat here that our priority in republic lines is a lasting or just peace, but unfortunately I see the Taliban and their supporters intend sedition.”

The president went on: “We either sit knee to knee at the real negotiating table or break their (Taliban) knees on the battleground.”

There were about 2,500 US troops in Afghanistan before the withdrawal started, plus another 7,000 personnel largely from NATO members.

Since the war in the country started 20 years ago, 457 members of the UK’s armed forces have died in Afghanistan, and around 150,000 have served there, the UK government said.

General Lord Richards, the former head of the UK army, told Sky News that it is “getting more and more difficult to see an alternative to civil war” in the country.

The US and the UK have accused the Taliban of committing war crimes in southern Afghanistan, with militants apparently carrying out revenge murders of civilians – something the Taliban denies.

The US and UK embassies in Kabul tweeted a joint statement, which said: “In Spin Boldak, Kandahar, the Taliban massacred dozens of civilians in revenge killings.

“These murders could constitute war crimes; they must be investigated & those Taliban fighters or commanders responsible held accountable.

“The Taliban’s leadership must be held responsible for the crimes of their fighters. If you cannot control your fighters now, you have no business in governance later,” they added.

As well as Kandahar, Helmand and Herat, some northern regions have also come under attack from the militants.

Russia, Uzbekistan and Tajikistan are planning to conduct trilateral military drills as the situation worsens on the other side of their borders.