The administration of United States President Donald Trump has faced its greatest challenge in 2020: The coronavirus pandemic and the disease it causes, COVID-19.

The administration’s response has been widespread, ranging from downplaying the crisis to enormous bailouts. It has also been the subject of much criticism, with Trump taking to his daily briefings to defend his response, often making contradictory claims.

Here is a timeline of key actions taken by the Trump administration related to its response to the virus within the US:

Reports emerge that the Chinese government is investigating an “outbreak of respiratory illness in the central city of Wuhan”.

The US Centers for Disease Control and Prevention (CDC) issues travel warnings for Americans wishing to go to China to take extra precautions. It also says it is closely monitoring the virus, but there are no known cases in the US.

January 16: CDC says US will screen passengers arriving from Wuhan

The CDC holds a briefing on the virus and officials say the US will start to screen passengers arriving from or connecting through Wuhan.

The first case is confirmed in a traveller who had recently visited China and returned to Washington state. 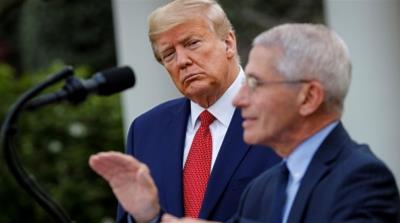 Dr Anthony Fauci, the head of the National Institute of Allergy and Infectious Diseases, is appointed to the task force.

Note: Fauci will become a trusted figure in the Trump administration’s response to the coronavirus.

Trump issues an executive order blocking entry to the US from anyone who has been in China in the last 14 days. It does not apply to US residents and family members or spouses of US residents or citizens.

The order becomes effective on February 2.

Trump asks for a $1.25bn in emergency aid after the Dow Jones Industrial Average tumbles 1,000 points on coronavirus fears.

He tweets that the virus “is very much under control” and the stock market “starting to look very good to me!”

A person in California is confirmed to have coronavirus without documented travel to hot spots or contact with another infected person.

The unknown source of the infection confirms that “community spread” of the virus is taking place in the US.

Trump says at a news conference that the US is “really prepared”. Vice President Mike Pence is named head of the White House task force and Dr Deborah Birx is named response coordinator.

Testing supplies remain a concern for the US as countries with higher case rates such as China and South Korea are able to test at higher rates.

The US Food and Drug Administration (FDA) announces it will permit certain US labs to test for the coronavirus using diagnostics developed and validated by the laboratories without prior review.

Trump claims the US is leading in testing, but reports show only a few thousand tests had been administered.

The House of Representatives passes a bill to aid the immediate health response to the coronavirus. Trump will sign the law on March 6.

Trump is facing increasing criticism for his administration’s response to the virus. The president criticises the previous administration in an interview with TV network Fox News, saying the Obama administration “didn’t do anything about” swine flu.

The president announces a ban on travel from Europe, which is seeing a marked increase in cases – specifically in Italy and Spain – to the US during a national address from the Oval Office. The ban does not apply to US citizens. The ban only includes the 26 Schengen countries. The UK and Ireland are not included, and US citizens are exempt.

Note: Less than a week later officials announced that the ban would be expanded to the UK and Ireland.

Markets react with worry, as Trump suggests cargo would also be subject to the ban, though this is not the case.

Trump also states during the address that health insurance providers promised to waive all copays for coronavirus treatment. In reality, only testing would be free.

Trump declares a national emergency, granting access to $50bn in funding for US states and territories. The move allows for waivers for doctors and hospitals in their response to the virus.

Trump says the US will increase testing capacity, but warns against those without symptoms being tested.

During a news conference, Trump asks “everyone to work at home, if possible, postpone unnecessary travel, and limit social gatherings to no more than 10 people”.

That same day, Trump states he has “always known this is a real, this is a pandemic. I’ve felt it was a pandemic long before it was called a pandemic”.

Note: The World Health Organization declared the coronavirus a pandemic on March 11. Trump had previously stated in February the heat could limit the spread of the virus and make it “go away” by April.

March 22: Fauci says he can’t ‘jump in front’ of Trump

As weariness over unverifiable Trump claims continues, Dr Fauci tells Science magazine in an interview that he “can’t jump in front of the microphone and push him down. OK, he said it. Let’s try and get it corrected for the next time.”

When asked how he is avoiding being fired, Fauci says that even though he disagrees with Trump “on some things, he listens. He goes his own way.”

March 24: Trump says he wants country to open by April 12

After tweeting that the “cure” cannot be “worse than the problem itself” as the US economy falters, Trump says on Fox News he would “love to have the country opened up, and just raring to go by Easter”.

Medical experts, including Dr Fauci, have told the media that the virus decides the timeline of a return to normalcy.

“The president clearly listens. I mean, he has this aspirational goal of hoping that we might be able to do it by a certain date. We talked with him about that. We say we need to be flexible. He realises that and he accepts that,” Fauci tells Fox News.

The House and Senate pass the largest bill in US history, which is then signed by Trump. The bill gives up to $1,200 per individual and $500 per child for households making up to $150,000 a year, though caveats and limitations apply to individuals.

Confirmed cases of the coronavirus top 160,000 by the end of March. Healthcare workers and authorities across the country bemoan the lack of testing.

Note: The DNA sequence for the novel coronavirus was not shared by China until January 7, 2020, almost three years after Trump was inaugurated.

Tests created in the US shipped during the early days of the crisis in the country contained tainted reagents, a component added to tests to create chemical reactions.

Trump tells the nation to prepare for “hard days”.

The US sets a record for single-week unemployment benefits claims as the economy continues to crash due to stay-at-home measures across the US, according to the US Department of Labor.

Worries increase that many businesses will close and a housing crisis could emerge from an inability to pay rent across the country.

Trump announces that his administration is recommending people wear nonmedical cloth masks to help contain the spread of the coronavirus, contradicting weeks of claims from administration officials that masks may not help.

The measure is voluntary. Trump says at a news briefing he does not see himself partaking.

Note: It was unclear which world leaders he was referring to since most are adhering to social distancing guidelines and are not travelling.

The recommendation reportedly came after weeks of heated debate inside the administration, according to reports.

Fauci previously said on March 3 that masks could help, but would not provide protection people hoped.

“If everybody does that, we’re each protecting each other,” Fauci says in an interview with PBS after the recommendation is made.

Trump says in two successive news briefings that US citizens should try an unproven anti-malaria drug, hydroxychloroquine, to treat COVID-19.

“Take it. What do you have to lose?” Trump asks on Saturday, suggesting he might do so himself after asking “my doctors”.

Trump says the following day there’s no time “to take a couple years” to test the drug’s potency against COVID-19.

Note: Evidence at this time was anecdotal. There were reports that misuse of the treatment can be fatal.

Fauci tells TV network CBS that “In terms of science, I don’t think we can definitively say it works.”

“The data are really just at best suggestive,” Fauci says. “There have been cases that show there may be an effect and there are others to show there’s no effect.”

Note: Actually, testing averaged 147,000 a day in that period, according to reporting from the Washington Post newspaper. The US was also lagging behind other countries in terms of testing per capita.

Rumours swirl that Trump will fire Fauci after the president retweeted a tweet with the hashtag #FireFauci.

But he added it was “very difficult to go back and say that” and the process of deciding whether to impose early restrictions was “complicated”.

Fauci says on April 13 it was a “poor choice of words”. The White House also says Trump is not firing the top scientist.

As states begin to see a stabilisation in infection rates, governors cautiously discuss reopening their states.

Trump clashes with governors, including New York’s Andrew Cuomo, on who has final say on the issue.

Trump says he has “total” authority on when the country reopens.

Note: Trump’s claim of total authority was not true. While the executive branch is granted some powers during times of emergency, even those powers have limits. The US constitution also gives public health and safety responsibilities primarily to state and local officials within their own jurisdictions.

Governors push back on Trump’s assertion, saying it was “factually wrong” and accusing the president of “spoiling for a fight on this issue”.

While authorities are hopeful the US can return to normal, Fauci and other medical experts expect to see little before a vaccine is created. The NIH head says he hopes to see a real degree of normality by November.

Trump issues guidelines developed by the US Centers for Disease Control and Prevention that offer states a phased approach to reopening their economies based on reductions in COVID-19 cases.

The plan envisions gradual reopenings in two-week phases as the numbers of COVID-19 infections continue to fall.

The White House strategy places responsibility for testing and tracing, and hospital capacity on states and leaves to governors the decision-making on when and how to reopen.

Trump announces he has signed an executive order imposing restructions on some seeking green cards for permanent residency in the US in order to protect Americans seeking jobs.

Unemployment in the US has surged because of the economic shutdown to slow the spread of the coronavirus. More than 26 million Americans have lost jobs.

The new order will last for 60 days but does not apply to individuals entering the US on a temporary basis such as agricultural “guest workers”.

It also does not apply to those already in the US seeking to adjust their status. Other exemptions apply.

Trump says he will consider renewing the order for another 60 days or longer depending on economic conditions.

Note: Critics of the president’s anti-immigration policies say he is just using the coronavirus pandemic as an excuse to impose restrictions that have little bearing on the health crisis. Research prior to the pandemic showed that more immigration actually led to job growth.