It’s one of the world’s best cities for wine. You can find terrific lists in pubs, bars and all sorts of restaurants in almost any neighborhood.

Lunchtime diners toast at Brat in the Shoreditch neighborhood, where the wine list leans toward natural but the classics are not ignored. Credit…Peter Flude for The New York Times 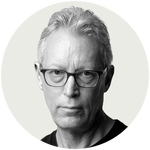 LONDON — What’s the greatest city in the world in which to drink wine? The answer is subjective, but to me it comes down to two: New York and London.

Neither is associated historically with a winemaking region, which is part of what makes them so great. Without the legacy of local production, both cities were compelled to look far and wide for wine, and as port cities, they had access to wines from wherever they were made.

In London, the far older city, that freedom required far-reaching discernment. Wine lovers needed to judge every sort of wine on its merits rather than specialize in what was easily accessible.

Americans have Britain to thank, or to blame, for the notion of wine connoisseurship. Expertise with an open heart is an extraordinary thing. Combined with insularity and disdain, however, it gives rise to snobbery and pretentiousness, which is the bane of wine everywhere.

I have always believed that New York was the best city for wine, but after 10 days in London in late November, I am rethinking that conviction.

Great wine lists can be found, of course, at the most expensive restaurants with multiple Michelin stars, as well as at famous places like St. John and the Ledbury. But I skipped those and a few other restaurants with excellent reputations for wine, like Gymkhana, an Indian restaurant in Mayfair, Sager & Wilde in Bethnal Green, the 10 Cases in Covent Garden and Planque in Haggerston.

London’s place as a noteworthy wine city is felt in all sorts of restaurants, from storefronts and counters to more formal dining rooms. Great wine is everywhere. Here are a dozen places to find an excellent glass.

The Drapers Arms, in Islington, is the English pub of my dreams. The food is wonderful and the cask beer excellent. The wine list is astonishing and mostly French, along with terrific, well-priced choices from Germany, Spain and South Africa. And this comfortable old pub, with its bare wooden tables, pea-green bar and simple barstools, pours its bottles into expensive Zalto glasses, so you know it takes wine ultraseriously. I had simple poached leeks and a delightful venison pie with a suet crust, carrots and onions, lovely on a rainy autumn afternoon. Most of the patrons were hoisting glasses of ale, but I drank a gorgeous 2018 Vin de Jardin from Domaine de Galouchey, one of my favorite tiny Bordeaux producers.

This understated family-run restaurant in Pimlico is a lovely stop for an impeccable tasting menu that seemed more Cantonese than Hunanese. Settle in and food begins to arrive — chive cake, prawn dumplings, stir-fried venison, mussels in black bean sauce — 20 to 25 courses in all. The wine list is extensive. It’s full of classics — Champagnes, white Burgundies, rieslings, Bordeaux — but offers its share of surprises under $100 as well. We drank a superb, breezy 2019 combination of riesling and furmint from Moric in Austria, which cost roughly $50. When, like Hunan, you’ve been in business for 40 years, you can offer well-aged, well priced bottles, too, like a 2006 riesling Auslese Schlossböckelheim from Dönnhoff for $80. 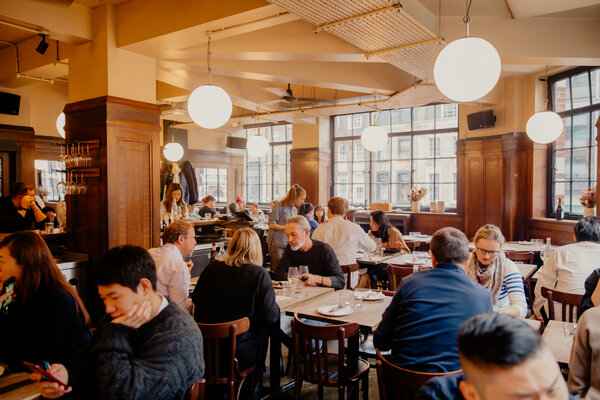 Shoreditch is sort of the Williamsburg of London, and Brat is the epitome of a great Shoreditch restaurant, effortlessly cool and seemingly uncomplicated, yet exceptional. Everything is cooked in an open kitchen over wood, and smoke permeates the spare, dimly lit dining room. The space pulses with warm energy, and the food is terrific: silken, intense crab soup; spicy beef tartare served with lettuce wraps; a venison chop full of flavor; rice served with roasted duck in a “personal wok,” the base crisp like the bottom of a Korean bibimbap. The wine list leans natural, but the classics are not ignored and great choices abound. I drank a 2020 poulsard from Bénédicte & Stéphane Tissot in the Jura, made without sulfur dioxide, spicy and alive.

Medlar is in an area of Chelsea known as World’s End, yet this smart, unpretentious white-tablecloth bistro is a delightful reason to see life through. A two-course lunch for roughly $50 might include crisp pork croquettes in a celeriac-and-apple rémoulade followed by Cornish brill, a flatfish, with a hazelnut-and-truffle pesto, both thoughtful combinations of textures and contrasting flavors. Medlar offers a serious cheese selection, and the wine list, put together by Melania Battiston, is wide-ranging and well-priced, with plenty of the classics but also many less-familiar options from Europe, Australia, South Africa and the United States.

When it opened in 2010, Brawn, an unprepossessing brick corner restaurant in Bethnal Green in the East End, was one of London’s natural-wine pioneers. Now, it’s one of dozens of casual, hip places, with two significant differences: The extensive list of natural wines is beautifully chosen, and the food is outstanding. An appetizer of cuttlefish, chickpeas and ’nduja was savory and spicy in perfect balance; the pastas, both a lovely agnolotti stuffed with pumpkin in a sage-and-butter sauce and a spaghetti in a hearty ragû of pork shoulder, were extraordinary. I loved an expressive 2021 Roche Bézigon from Jean-Christophe Garnier, a Loire chenin blanc that is difficult to find in the United States.

Noble Rot started as a cheeky wine zine. Now it has expanded to an empire with restaurants, a retail shop, a book and an import business. The secret? Exquisite taste, an unpretentious attitude and a sense of humor. Its second restaurant, in a tight but comfortable townhouse in Soho, seems perennially packed for the classic bistro fare and the exceedingly deep wine list. You could start by exploring the world of English sparkling wine — the list offers seven options, more than most places. The list is also mostly European, and you can drink exceedingly well for under $75, from an excellent selection of Beaujolais, for example. But if you can splurge, this is a place to do it, because you can find some aged treasures, like a wonderful 1978 St.-Julien from Château Léoville Barton, with textbook complex, savory flavors, for roughly $190. The food lives up to the wine. We had lamb chops with a welcome muttony tang, and an excellent rabbit loin.

By day, 40 Maltby Street, under a trestle in Bermondsey, is a retail and takeout shop, selling sandwiches and all manner of orange wines, pétillants naturels and other products of the wine counterculture. In the evenings, and for Saturday lunch, it becomes a tiny wine bar that does not take reservations. It’s close, it’s loud, and it’s terrific and unusual. I managed to squeeze into the bar for a Saturday lunch of smooth, savory chestnut-and-Jerusalem artichoke soup and a turnip quiche with pickled chanterelles and a flaky, flavorful crust. I watched two chefs working like short-order cooks, and drank a glass of rosé pét-nat — sweet, salty and dry — from Costadilà in the Veneto region of Italy. Saturday is a great time to go. Nearby, the Maltby Street Market, a series of shops and food stalls, is great for people watching and further consumption.

In contrast to the profusion of bistros, wine bars and gastro pubs that characterize so much of modern urban dining, Trivet in Bermondsey is an exception: a bright, cleanly designed restaurant that my mother would have termed Danish Modern, with food that shows a chef’s skilled touch, and an unusual wine list arranged in order of when a region first produced wine. This means a fascinating list, headed by bottles from Georgia, Armenia and Turkey along with the Middle East. They are worth exploration. I’ve never had a wine made of the akhtanak grape before, but an Armenian red, a 2015 from Voskevaz, was structured, firm and complex. You could easily skip forward in history for solid selections from relative newcomers, like France and Italy, but where’s the fun in that? The food is equally designed and earthy, like a feathery sweetbread with smoked maitake mushrooms and pickled lingonberry, a balance of textures and sweet, sour and smoky flavors, or meaty squab with persimmon and roasted carrots. The chef and sommelier, Jonny Lake and Isa Bal, came from Fat Duck, Heston Blumenthal’s three -Michelin- starred restaurant. Nonetheless, Trivet is warmly informal.

Xavier Rousset owns a small group of restaurants that put wine front and center. At Blandford Comptoir in Marylebone, a discreet spot with marble-topped tables and a marble counter that would be great for single diners, Mr. Rousset and the sommelier, Andi Harabagiu, have assembled an exceptional wine list with a focus on the Rhône Valley. It’s not inexpensive, though you can easily drink well for under $75 a bottle. But the glory is in the Hermitages, Châteauneuf-du-Papes and other Rhône appellations, which are not all cheap. I drank a sublime Jean-Louis Chave estate St.-Joseph 2016, one of the best St.-Josephs, for about $175, and it was memorable. The food is what Americans once called continental, or pan-European. I had a robust boeuf bourguignon and a walnut tart that could not have been better.

The Sunday roast is a beloved tradition in homes and pubs across Britain. The Quality Chop House in Clerkenwell is a great, if filling, place to enjoy the experience. This 150-year-old eating house has been rejuvenated by a small restaurant group into an inviting, informal bastion of English meat-eating, the kind of place you could imagine yourself pounding the table for a joint of stag. Nothing fancy here, just wooden pews and chairs, bare wood tables and jovial servers. I ordered a classic roast pork (tender Mangalitsa collar) with apple sauce, which came with Yorkshire pudding, roast potatoes, broccoli and red cabbage. But first was an extraordinary cup of “game tea,” a rich, complex broth that deserved contemplation. After that, food seemed to arrive in an avalanche. One shouldn’t plan another meal, or, really, anything after a Sunday roast like this. You could get fancy with wine, as the eclectic list does not ignore the high end, but a 2020 Fleurie Poncié, a gently fruity cru Beaujolais from Du Grappin, was perfect for the occasion.

Local Thai? The menu is influenced by northern Thai cuisine, but the ingredients at Kiln, in Soho, are all from England, and the founder is Ben Chapman, also of Brat. While the restaurant has a cellar dining room, the real fun is in the casual, street-level counter where the cooks work over charcoal, pausing to chat with diners. Dishes like northern-style laap sausage; pollock in a sour curry; or glass noodles baked with pork belly and crab in a clay pot are excellent and full-throated spicy. The wines are all natural, with quite a few by-the-glass options. While many seem obscure, the wines I had — a sparkling chardonnay-pinot blanc from Nibiru in the Kamptal region of Austria, and a counoise, vinified as a white, from Les Frères Soulier in Languedoc — went beautifully with the spicy cuisine.

Since 1995, Chez Bruce in Wandsworth in southwest London has been a place for special occasions — anniversaries, graduations or dates to impress. It’s fittingly old-fashioned and serious, though by no means solemn, with celebratory dishes like chateaubriand and hare Wellington. The wine list, likewise, is appropriately classic. You can drink a good assyrtiko or trousseau, but special meals often require special wines, and Chez Bruce is up to the challenge with excellent selections of Champagne and sparkling wine, half-bottles and deep European selections, often with a little age. With a savory onion tart imbued with buttery Lancashire cheese, and rabbit stuffed with shallots, prunes and potatoes, I drank a 2006 Hermitage from Bernard Faurie, a brilliant Northern Rhône wine that seemed young enough that I could plan to return for another go in a few years.