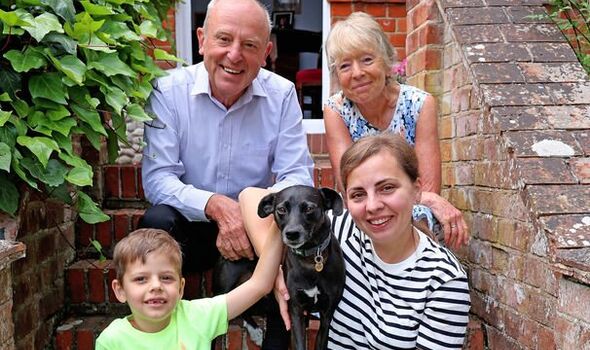 In warm welcomes epitomising the very best of British, women and children have found happiness, and even love, with total strangers after war turned their lives upside down.

The Homes for Ukraine scheme, which opened in March, has provided safe passage to those whose lives were in danger because of Vladimir Putin’s bloody attack on innocents.

Refugees Viktoria Trishnovska and her son Artem have started a new life in Beaconsfield, Bucks, the picturesque town once ranked Britain’s richest.

Summer fetes, school fairs and long country walks are a far cry from their lives just a few months ago.

But, like millions of their compatriots, they were forced to gather a few meagre possessions and hastily flee the war-ravaged country in fear of their lives. They had no idea where they would end up.

World-respected oncologist and former WHO cancer chief Karol, 74, signed up for the Homes for Ukraine scheme to repay the faith Britain showed his father when he arrived here during the Second World War.

Witold, a captain in the Polish Army, came here in 1942 and met his future wife, Thomasina, at a tea dance. Karol was born six years later.

Fast forward 80 years and the hand of friendship has stretched 1,500-miles across Europe.

Karol said: “There are echoes of my own family here. My father was an engineering graduate from Lwow, now Lviv. He joined the Polish Army in 1939 in the Signals Division after coming through Romania and Italy to France, finally ending up in Scotland.”

“He became captain in the Royal Engineers and met my mother at a Polish officers’ dance in Edinburgh. My mother was a schoolteacher, invited there with her sister.”

“It was tough for them after the war – there were no jobs for engineers – but he found work in Carron Steelworks near Falkirk where I was born. I was an only child, moving to Stafford and then London.”

“My father died from cancer at 56 when I was just 17. It made me read all about [the disease] before I studied medicine. It certainly influenced my choice of career and hopefully, over the decades, we’ve managed to avert the same fate for many families.”

“The trauma caused by war for my parents’ generation is being repeated for our Ukrainian friends. The same uncertainties exist for them now.”

“I hope and pray a peaceful resolution is found soon, and in the meantime, people like Viktoria and Artem can continue a life as close to normal as possible.”

Since Russia invaded Ukraine in February, 10 million refugees have fled, while eight million people have been displaced. The war has forced one-quarter of the population to leave their homes.

Until they opened up their family home of 40 years they were rattling around with only Chico for company. Now they dote on their surrogate family, and for Karol their arrival has special significance.

Viktoria, 36, and Artem, six, left their home in Kamianets-Podilskyi in southwestern Ukraine, close to the Moldovan border, when the bombs started raining down.

It has seen bloodshed before. It was part of the Soviet Union until 1991 and invaded by Nazi forces on June 22, 1941. The Kamianets-Podilskyi massacre left 23,600 Jews shot dead by German police,

Despite the upheaval, Artem has shown no signs of the torment he has endured and is relishing life in the English countryside. He is now looking forward to a carefree summer playing with Chico, his new best friend.

He spent the final few weeks of term at Butlers Court School where Karol’s daughter Emma works. Viktoria is now training to become a beautician at a local nail bar.

She said: “Before war I worked as an accountant and Artem attended the kindergarten.” We decided to leave Ukraine as there were lots of alarms and we had to go to the cellar and hide there for six hours.

“Artem was so scared. And the final straw was when there was shelling just 30km from our town.

“I like Beaconsfield and I am very pleased I live with such a nice family. Everybody in the family is very nice and friendly, Artem plays with their grandchildren and goes to the same class with one of them. He enjoys his school as everybody starting from the headmaster is very friendly and Karol’s daughter is a teaching assistant in Artem’s class.”

“The children are also very nice to him. Karol and Alison have helped me a lot to solve all my problems. I am very grateful for their care and warmth, they treat us as their family.”

The landmark figure of those given shelter here has been reached thanks to the generosity of ordinary Britons horrified by events in Eastern Europe.

And from today new applications will be taken from children and minors under the age of 18 without a parent or guardian. It means those not travelling with or joining their parents or guardian will be considered, enabling them to apply for a visa, provided they have consent.

Karol added: “Making the decision to offer a home to Viktoria and Artem was relatively easy for us. But I’ll be honest, as their arrival approached, nerves did begin to set in. How would it work? Would they feel at home? Would the language barrier be a problem? There were lots of questions, but only one way to answer them.”

“Fortunately, it has all gone far smoother than we had both thought possible.”