Scotland’s biggest city by population has made the shortlist of seven in the UK that could host the Eurovision Song Contest in May 2023 – and will go up against Birmingham, Leeds, Liverpool, Manchester, Newcastle and Sheffield. London and Belfast were amongst those who were surprisingly snubbed after 20 cities expressed an interest in the European Broadcasting Union (EBU). The UK is hosting Eurovision in place of war-torn Ukraine after British singer Sam Ryder finished second at this year’s contest.

But her tweet has sparked a furious backlash, many of whom appeared to be against her relentless pursuit of Scottish independence.

Twitter user “Simon (spud) Wynn” (@simonspudwynn) raged: “So you can pack out the arena with EU flag waving Remoaners and turn it into a political event? No thanks.”

“Martin Minshall” (@martinminshall) fumed: “You don’t even want Glasgow to be a part of the UK! The hypocrisy!” 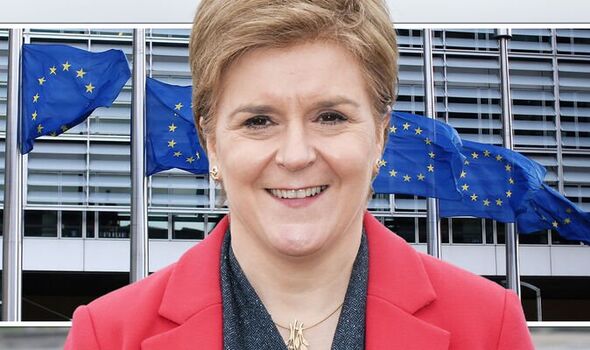 “Does the leader of a nationalist Government who’s promised a referendum in 2023 want a celebration of all things British?

“From the other side: you’ll make this all about the SNP and it should be about the UK and Ukraine.”

“Bob Dryden” (@bobbyd424) commented: “How many selfies could you get there? What a chance for you.”

Several other people said the Scottish Government should stop “wasting” money on hosting Eurovision and focus on more immediate problems at home, such as the cost of living crisis.

Fellow Twitter user “scott knight (@scottknight12) also commented: “Maybe if we get it do u think we can get the bins emptied and the streets cleaned?”

In order to hold the Eurovision Song Contest, the host city needs to prove they have all the required facilities, such as transportation, accommodation and international links at airports – and also go through a bidding process as well.

The host venue must also be able to accommodate around 10,000 people, be easily accessible to an international airport and have enough hotel accommodation for at least 2,000 delegates, journalists and spectators.

A spokesperson for the council said: “Since it became a possibility that the UK might host on behalf of Ukraine we’ve been working hard on our bid.

“We know we meet all the technical requirements, and we know Glaswegians are desperate to welcome the world with open arms.

A final decision on which city will be named as host of Eurovision 2023 is expected in the Autumn.