PMQs: Boris Johnson tells Keir Starmer to ‘back the government’

Labour Leader Sir Keir Starmer was savagely attacked by Boris Johnson in a furious row in PMQ’s on Wednesday afternoon. Sir Keir demanded assurances from the Prime Minister regarding support for businesses and extension of furlough beyond April. However, Mr Johnson insisted the Labour leader would routinely flip flop support from one week to the next.

He demanded that Sir Keir support Britain and support the British Government’s efforts to vaccine as many people as possible.

Mr Johnson said: “I have said repeatedly that what we will do in this Government through this pandemic is put our arms around the British people and support them throughout the pandemic and make sure that people are not unfairly evicted, that is what we will do.”

“Rather than sniping from the sidelines why doesn’t he just get behind us and back the Government, back us and to back business and back the British people?” 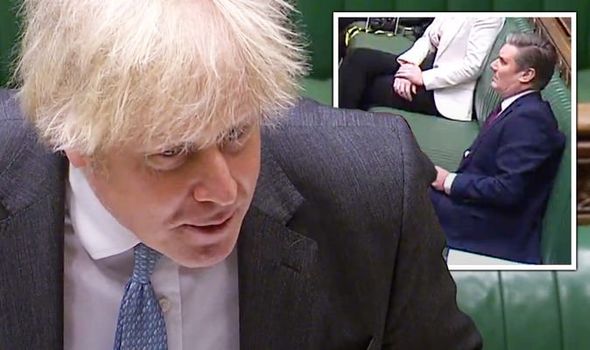 He said: “I am delighted that he is now supporting business in his latest stunt of bandwagoning

“He moves from one side of the debate to the other throughout this crisis.”

“Those people sit on the Labour front-bench.

“It is disgraceful that they should say those things and I believe this is one of the biggest challenges facing the UK since WW2.

“Thanks to one of the fastest rollouts anywhere in the world, I believe it is a challenge that this country can meet.

“I believe that the vaccine rollout programme, this House and this country should be very proud of.”