WASHINGTON — It’s not just Michael T. Flynn. The White House is weighing a wave of pardons and commutations by President Trump in his final weeks in office, prompting jockeying by a range of clemency seekers and their representatives, including more allies of Mr. Trump.

Among those hoping for pardons are two former Trump campaign advisers, Rick Gates and George Papadopoulos, who like Mr. Flynn, the former national security adviser who is already said to be in line for a pardon from Mr. Trump, were convicted in cases stemming from the special counsel’s Russia investigation.

Alan Dershowitz, the law professor who represented Mr. Trump during his impeachment trial, is considering seeking clemency for two of his clients — a New Jersey man serving more than 20 years for defrauding investors, and a billionaire businessman convicted in what’s been called “one of North Carolina’s worst government corruption scandals.”

Mr. Dershowitz said he recently discussed the pardon process with the White House.

But it is not just the well-connected and wealthy who could benefit from one of Mr. Trump’s final exercises of executive power, lawyers in contact with the administration said.

Several groups that have pushed for a criminal justice overhaul are working with an ad hoc White House team under the direction of Jared Kushner, Mr. Trump’s son-in-law and adviser, with a goal of announcing as many as hundreds of commutations for offenders now in jail for crimes ranging from nonviolent drug convictions to mail fraud and money laundering.

“Lists of people are being circulated,” said Brandon Sample, a Vermont lawyer who specializes in presidential pardons and has submitted several names of people to be considered. Among them is Russell Bradley Marks, 57, who has been imprisoned after pleading guilty in 1992 on a cocaine-related conviction for which he was given a mandatory life sentence.

The end of any presidential administration is a time for intense lobbying related to pardons.

But in Mr. Trump’s case, it extends to his own personal and political considerations, his lingering bitterness over the Russia inquiry and his transactional approach to governing.

The sheer number of people in the president’s circle to have gotten in trouble with the law has also made the question of pardons especially fraught. In addition to Mr. Flynn, Mr. Gates and Mr. Papadopoulos, Trump aides and associates who have been convicted include Michael D. Cohen, Mr. Trump’s former lawyer; Roger J. Stone Jr., his longtime friend and adviser; and Paul Manafort, his former campaign chairman.

Others in the president’s circle to face federal charges include Stephen K. Bannon, his former strategist, who was indicted in August on charges of defrauding donors to a campaign to support Mr. Trump’s plans to build a wall along the border with Mexico, and Elliott Broidy, a top fund-raiser, who pleaded guilty last month in a foreign lobbying case.

Lawyers say the White House is also focused on ways to use presidential clemency powers to further burnish Mr. Trump’s role in what is considered the most consequential criminal justice legislation in a generation, which reduced sentences for nonviolent offenders.

A blitz of late pardons or commutations for federal crimes — over which presidents have unchecked power — is seen by some criminal justice reform activists as another way to build his record on that issue. 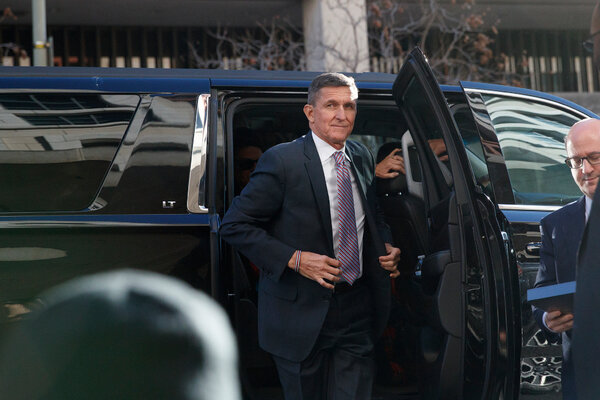 Far more explosive in political terms is the possibility of pardons or commutations for allies, associates or even himself, reflecting Mr. Trump’s oft-stated belief that his presidency was undermined by law enforcement investigations, including the special counsel’s inquiry.

Mr. Flynn has been seeking to have the case against him dismissed, after the Justice Department moved to drop charges against him, even though Mr. Flynn had twice pleaded guilty to lying to investigators who were examining his contacts with the Russian ambassador before Mr. Trump took office.

But with that case tied up in court and now looking like it might drag on past Mr. Trump’s tenure, the president has told aides he plans to move ahead with a pardon, a decision sure to give hope to other associates seeking clemency.

“The president knows how much those of us who worked for him have suffered, and I hope he takes that into consideration if and when he grants any pardons,” said Mr. Gates, who served as Mr. Trump’s deputy campaign chairman in 2016 before pleading guilty to financial fraud and lying to investigators and becoming a star witness for the special counsel’s team.

So far, Mr. Trump has granted 28 pardons, which wipe out convictions, and 16 commutations, which reduce prison sentences. The combined total is the lowest so far for any president since at least William McKinley, who took office in 1897, according to an analysis by the Pew Research Center.

President Barack Obama issued 212 pardons and 1,715 commutations during his eight years in office, most of which went to low-profile convicts who were facing long prison terms for nonviolent offenses.

Of the actions Mr. Trump has taken, many have benefited individuals with a personal or political connection to Mr. Trump.

They include Mr. Stone, who had been convicted of charges brought by the special counsel, the conservative commentator Dinesh D’Souza and the former Wall Street executive Michael Milken, whose bid for a pardon drew support from Treasury Secretary Steven Mnuchin.

Mr. Trump also has mused about pardoning Mr. Manafort, who was sentenced to seven and a half years in prison for obstructing justice and violating financial and lobbying laws, in the highest-profile of the cases brought by the special counsel.

There is open speculation about whether he might go even further in using his clemency power in his self-interest, possibly issuing pre-emptive pardons to members of his family and even himself for federal crimes.

Even if such a self-pardon were possible — scholars differ on the legality — it would not inoculate Mr. Trump against possible charges stemming from ongoing investigations into his business and finances by city and state prosecutors in New York.

The planned clemency initiative, and the lobbying that has unfolded around it, has been hindered in some ways in recent weeks by Mr. Trump’s refusal to formally concede his loss to President-elect Joseph R. Biden Jr.

Potential pardon seekers and their representatives said in interviews that they were waiting to escalate their appeals until Mr. Trump conceded, or at least signaled that he had started to come to grips with the looming end of his presidency. Appealing for clemency before then, people involved warn, risks backfiring, because it could be seen as acknowledging a defeat that Mr. Trump has thus far refused to accept.

“As long as they’re fighting this and there are court cases and the Electoral College hasn’t voted, it seems premature,” said Bud Cummins, a former U.S. attorney who was credited by the White House for helping persuade Mr. Trump to commute the sentence last year of one of his clients, a politically connected Arkansas businessman convicted of bribery related to Medicaid fraud.

Mr. Cummins, who was registered to lobby this year for a firm co-founded by two Trump campaign aides, said “lots of people” had approached him asking for help winning pardons from Mr. Trump. He declined to identify them.

Other potential pardon seekers and their allies are discussing a range of strategies to win over the president. They include highlighting donations to Mr. Trump, spending money at his properties, trying to hire lawyers or lobbyists seen as close to him and emphasizing business connections that could help Mr. Trump after he leaves office.

Some are echoing a theme that has resonated with Mr. Trump — grievances about unfair treatment at the hands of prosecutors and investigators.

Mr. Gates, who received a 45-day jail sentence after cooperating with investigators, published a book last month accusing the special counsel’s team of using devious strong-arm tactics to pursue Mr. Trump and his allies. Mr. Gates conceded that his criticism of the investigation could potentially help with a pardon, but he added that “my motivation in writing the book was not to seek a pardon; it was to expose the truth about the Russia investigation.”

Mr. Papadopoulos, who pleaded guilty to lying to the F.B.I. and served 12 days in jail, has also been very public in his embrace of Mr. Trump. He appeared at the Trump National Doral resort in Florida last month for a conference of conservative activists, where he promoted his book, “Deep State Target: How I Got Caught in the Cross Hairs of the Plot to Bring Down President Trump.”

In an interview, he said his support for Mr. Trump was not inspired by his pursuit of a pardon, adding that he did not expect he would get one but still hoped it would happen.

“Of course I would be honored to be pardoned,” Mr. Papadopoulos said.

Others seeking creative ways to forge ties to the president include Joseph Maldonado-Passage, the former Oklahoma zoo owner who is better known as Joe Exotic. His representatives have been running a carefully orchestrated campaign to try to persuade Mr. Trump to pardon Mr. Maldonado-Passage, who is one year into a 22-year sentence for trying to hire a hit man to kill an animal-rights activist.

They have focused on getting Mr. Trump’s attention through appeals to Donald Trump Jr. and Mr. Kushner, appearances on Fox News and a visit to the Trump International Hotel in Washington where, one organizer said, they ran up a tab of about $10,000 to try to get Mr. Trump’s attention.

Mr. Dershowitz helped clients secure pardons from Mr. Trump in 2017 and 2019. He is exploring applying for pardons on behalf of Greg E. Lindberg, a North Carolina businessman who was sentenced in August to more than seven years in prison for his role in a bribery scheme that shook the state’s Republican Party, and Eliyahu Weinstein, a New Jersey man sentenced to more than 20 years in prison for a real estate Ponzi scheme.

Mr. Dershowitz said he had not approached Mr. Trump about either case, though he did have a recent conversation with the White House about how its pardon process will work. And he recalled an earlier conversation in which he explained his general philosophy on the importance of pardons to Mr. Trump.

The president, Mr. Dershowitz said, “was very interested in the concept of the pardon power being more than just clemency, but being part of the system of checks and balances for excessive legislative or judicial actions.”

The effort to create a White House commutation program separate from the formal Justice Department office started last year after the 2018 passage of the First Step Act, which expanded an early release program and modified sentencing laws, including mandatory minimum sentences for nonviolent drug offenders.

There are at least 13,700 people who have formally applied to the Justice Department for pardons that are listed as “pending.”

Representatives of inmates seeking sentence reductions have separately been sending the White House lists of names, typically focusing on people who received unusually long sentences for nonviolent crimes after declining to accept a plea agreement and others serving long sentences because of mandatory guidelines.

“Each of these are sad, sad situations,” said Norman Reimer, the executive director of the National Association of Criminal Defense Lawyers. “They show massive injustice and over- sentencing, and we hope he will act on them.”