President Trump’s path to re-election always had very little margin for error. His victory in 2016 was decided by just 77,000 votes spread across three Northern battleground states, fewer than the crowd at an average Big Ten football game on a Saturday, at least before the pandemic.

Since the start of his campaign in early 2019, President-elect Joseph R. Biden Jr. has made the case that he could beat Mr. Trump precisely because of the strength he would have in those states — Michigan, Pennsylvania and Wisconsin — where his unpretentious, approachable style and moderate politics would connect with voters.

On Election Day, Mr. Biden’s analysis prevailed. He won every state. Here is a look at the dynamics that worked in his favor.

The antipathy toward Mr. Trump in many swing and Republican-leaning suburbs was a national phenomenon, and in the communities surrounding Detroit it provided Mr. Biden with the votes he needed to help claw the state back from the president.

Victory was always going to be difficult for Mr. Trump in Michigan, a state he won by less than 11,000 votes in 2016. But he traveled there often in the final days of the race, believing it was within reach. The Republican National Committee, whose chairwoman, Ronna McDaniel, lives in Michigan, dropped money on a last-minute ad campaign in the hope of moving the needle in the president’s favor. 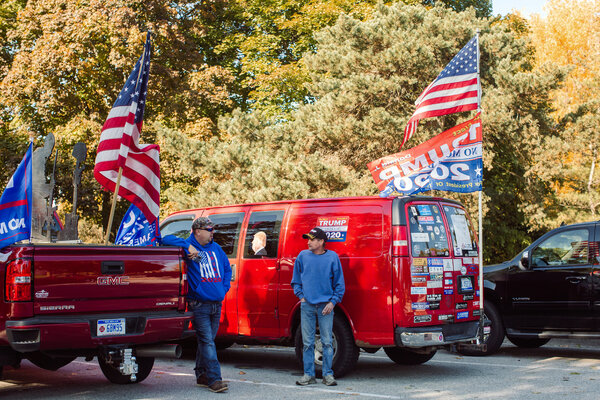 In the end, Mr. Trump held onto most of the counties he won in 2016 and boosted his vote total statewide by nearly 370,000, with gains in places like Macomb County, a bellwether that first appeared in the political spotlight in the 1980s, thanks to its high concentration of Reagan Democrats. But it was not enough. He grew his base, but often in smaller, rural counties where there weren’t a lot of votes to begin with. And even in places where he gained significantly, like Macomb, Mr. Biden’s gains were bigger when measured against Hillary Clinton’s totals in 2016.

Mr. Biden surged ahead of Mrs. Clinton’s statewide, especially in suburban areas where Republicans were once dominant. He managed to flip conservative-leaning Kent County in the western part of the state, the home of former President Gerald R. Ford. In Oakland County, the state’s second-largest, Mr. Biden finished ahead of Mr. Trump by 14 points, a major improvement over not just Mrs. Clinton but also Barack Obama in 2008, who both won it by eight points. Mr. Biden managed to do very well in the county’s wealthy enclaves like Bloomfield Hills, where Mitt Romney grew up and where being a Democrat was, until recently, one of the surest impediments to getting elected at any level of government.

As was the case in many suburban areas across the Midwestern battlegrounds, women voters were especially activated in Oakland County.

One place that was not especially helpful to the president-elect was the city of Detroit. A lack of enthusiasm there for Mrs. Clinton helped sink her chances of winning the state, but this year Democrats had high hopes that turnout in the predominantly African-American city would rebound. It did, but for Mr. Trump. Though Mr. Biden won Detroit with 94 percent of the vote, he received almost 1,000 fewer votes than Mrs. Clinton did in 2016. Mr. Trump increased his totals by nearly 5,000 votes, with strength concentrated in small pockets of the city like the west side, which has a large number of Latino voters.

The trends in the state that put Mr. Biden over the top in the Electoral College were similar to those in Michigan. Its biggest city, Philadelphia, went overwhelmingly to the president-elect, but also provided Mr. Trump with more votes than he received four years ago.

Though votes were still trickling in nearly a week after Election Day, Mr. Biden was behind where Mrs. Clinton finished in Philadelphia. And Mr. Trump saw an uptick in his numbers in white working-class neighborhoods in the city’s northeast, as well as in precincts with large Latino populations.

Outside of Philadelphia, it was a different story. Mr. Biden’s voters showed up in overwhelming numbers in the suburbs and swing counties farther out, like Northampton in the Lehigh Valley and Erie in the northwest. These predominantly white counties voted twice for Mr. Obama, then went to Mr. Trump in 2016.

Mr. Biden won them both, but narrowly — Erie County by one percentage point and Northampton County by less than a point. Northampton, with its mix of rural areas, old mining towns and small to medium-size cities like Bethlehem, behaved like other demographically similar areas where Mr. Trump’s leadership style drove voters away and energized the opposition against him.

Erie County does not have as high an average income as Northampton, but it has about the same majority percentage of white voters, spread across rural areas and small cities. It was the kind of place where Mr. Biden’s back story, rooted in the working-class city of Scranton, about five hours east, seems to have made Trump voters comfortable switching sides. While Mr. Trump increased his vote totals in Erie County by roughly 5,000, Mr. Biden outdid him. He improved on Mrs. Clinton’s performance by more than 9,000 votes to pull just barely ahead, proving again that in places where the Trump campaign was effective at mobilizing its base, it could not keep pace.

For much of the campaign, Mr. Trump’s re-election seemed to hinge on Wisconsin. It was the test market for his playbook of driving up turnout in rural areas where his operation could identify people who liked him but who didn’t vote in 2016. The playbook worked, but the margins were too small: a few thousand votes, give or take, in most of the state’s 72 counties.

Mr. Biden didn’t flip any major counties, just two smaller ones north of Milwaukee. But in a sign of the president’s weakness among voters 65 and older, one of those was Door County, northeast of Green Bay on Lake Michigan. As a destination popular with retirees but also reliant on tourism, Door County was an especially bad environment for the president, considering the many voters who blamed him for mismanaging the deadly coronavirus and the economic fallout that followed.

In the bigger picture, Wisconsin’s shifts toward Mr. Biden came from its cities and largest counties. Well-educated, prosperous counties like Dane, home to the liberal university town of Madison, saw a significant jump in turnout over 2016 that went almost entirely to Mr. Biden. In the conservative counties surrounding Milwaukee that are a bulwark of support for Republicans running statewide, Mr. Trump’s share of the vote declined. The drop off wasn’t huge, but it helped Mr. Biden build his 20,000-vote lead in Wisconsin.

In the city of Milwaukee, the dynamic was once again similar to the ones seen in Detroit and Philadelphia: Mr. Biden won an overwhelming share of the city but did not improve much over Mrs. Clinton. And in wards of the city with majority Black populations, fewer voters cast their votes for him than they did for her, according to The Milwaukee Journal Sentinel. Mr. Biden also appeared to do worse against Mr. Trump in city wards with a large number of Latino voters.