WASHINGTON — The Justice Department watchdog announced Monday that he had opened an investigation into whether any of the department’s officials tried to undo the results of the presidential election, as scrutiny of former President Donald J. Trump and his associates builds ahead of his impeachment trial.

The investigation by the department’s inspector general, Michael E. Horowitz, followed efforts by Mr. Trump and a top federal law enforcement official, Jeffrey Clark, to push other Justice Department leaders to falsely assert that continuing fraud investigations cast doubt on the election results. As detailed by The New York Times in recent days, Mr. Trump was said to have considered installing Mr. Clark as acting attorney general to carry out the scheme.

“The inspector general is initiating an investigation into whether any former or current D.O.J. official engaged in an improper attempt to have D.O.J. seek to alter the outcome of the 2020 presidential election,” Mr. Horowitz said in a statement, adding that he was announcing the inquiry to reassure the public that the matter was being examined.

The inquiry adds to the increasing scrutiny on Mr. Trump’s attempts to wield the power of the Justice Department to advance his false claims about the election in the final weeks of his presidency. It follows another inspector general investigation into whether a federal prosecutor in Georgia was improperly pushed to help and a broader Democratic-led Senate inquiry into pressure on the department to aid Mr. Trump’s cause.

Mr. Trump sought repeatedly to compel the Justice Department to back his baseless claims of election irregularities, ultimately prompting the attorney general at the time, William P. Barr, to publicly state early last month that the department had found no voting fraud on a scale that would affect the election results. Mr. Barr fell out of favor with Mr. Trump over the issue and left his post within weeks.

The investigation underscores fears among Senate Republicans, including Senator Mitch McConnell of Kentucky, the minority leader, that if they do not distance themselves from Mr. Trump and undo his grip on the party, a steady drip of negative revelations paired with his own erratic behavior could damage their political fortunes.

“If Trump loses credibility because it appears he’s acted in a way that no one can justify, the leverage that he might have over the Republican Party could be diffused,” said William Marshall, a professor at the University of North Carolina who teaches and writes on presidential power. “The more that indicates he behaved improperly makes it less easy to defend him and less easy to stand by him.”

Senator Chuck Schumer, Democrat of New York and the majority leader, had urged Mr. Horowitz over the weekend to open an investigation, saying that it was “unconscionable that a Trump Justice Department leader would conspire to subvert the people’s will.”

The inspector general also noted that his inquiry would be limited to the Justice Department because other agencies did not fall within his purview, a nod to the array of people who sought during Mr. Trump’s final weeks in office to find a way to stop the certification of Joseph R. Biden Jr.’s victory.

This month, Mr. Horowitz opened an investigation into whether Trump administration officials pressured Byung J. Pak, at the time the U.S. attorney in Atlanta, who abruptly resigned after it became clear to Mr. Trump that he would not take actions to cast doubt on or undo the results of the election, according to a person briefed on the inquiry.

Separately, the Senate Judiciary Committee said this weekend that it had initiated its own oversight inquiry into officials including Mr. Clark, who was the head of the Justice Department’s environmental and natural resources division and the acting head of its civil division.

Senator Richard J. Durbin of Illinois, the top Democrat on the committee, sent a letter to the Justice Department saying that he would investigate efforts by Mr. Trump and Mr. Clark to use the agency “to further Trump’s efforts to subvert the results of the 2020 presidential election.” 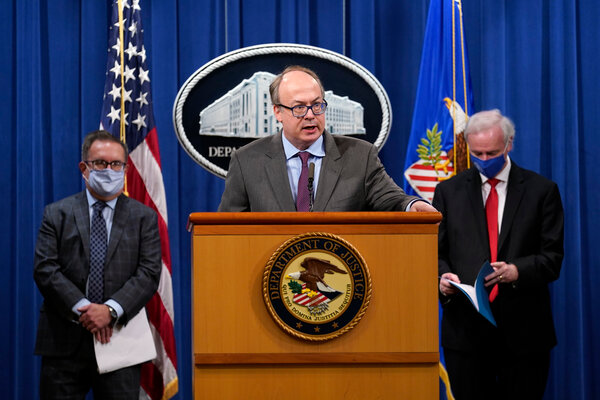 Mr. Biden’s win was deemed valid after recounts in Wisconsin and Georgia declared him the victor and after the Trump campaign team was unable to prove widespread fraud in court cases in Arizona, Georgia, Michigan, Nevada and Pennsylvania. Dozens of F.B.I. investigations uncovered no voter fraud on a scale that would have changed the results of the election, according to Justice Department officials briefed on the cases.

Dozens of Republicans in Congress were among those who backed Mr. Trump’s false claims, including Representative Scott Perry, Republican of Pennsylvania. On Monday, he confirmed a Times report that he had introduced Mr. Trump and Mr. Clark, giving the president access to the sole top Justice Department official willing to entertain the idea that Mr. Biden had not won the election.

Mr. Perry, a member of the pro-Trump, hard-line Freedom Caucus, said in a statement to a Pennsylvania public radio affiliate that he spoke with Mr. Trump and Mr. Clark about election fraud claims.

“Throughout the past four years, I worked with Assistant Attorney General Clark on various legislative matters,” Mr. Perry said. “When President Trump asked if I would make an introduction, I obliged.”

Allies of Mr. Clark have characterized the conversations as simply laying out the legal options available to Mr. Trump. But Mr. Clark’s former colleagues have said there were no more legal remedies that Mr. Trump could have pursued through the department.

Still, their assessment did not stop Mr. Trump from pressuring the Justice Department to fight harder to find a way to help him. When Mr. Barr declined to appoint special counsels to examine voting irregularities or take other measures that would have helped to throw the election results into doubt, he and Mr. Trump agreed that he should leave the department, according to three people familiar with their conversation. Mr. Barr stipulated that the deputy attorney general at the time, Jeffrey A. Rosen, replace him, the people said.

Mr. Trump began to push Mr. Rosen to promote baseless suspicions about voting fraud the day after announcing that Mr. Barr would leave and kept up the pressure through the last weeks of December, pushing him to open investigations and to challenge Mr. Biden’s win before the Supreme Court.

But as the department’s top officials pushed back, Mr. Trump separately opened a line of communication with Mr. Clark, who seemed more amenable to his theory that he had won the election, according to five people familiar with the matter, asking him to publicize inquiries that could cast doubt on the election.

Mr. Trump’s deliberations over whether to replace Mr. Rosen with Mr. Clark also set off a crisis among other senior Justice Department officials, who pledged to quit should Mr. Rosen be fired. The vow was said to have helped persuade Mr. Trump not to act.

While the machinations between Mr. Trump, Mr. Clark and Mr. Perry will not be the focus of Mr. Trump’s impeachment trial — which accuses him of inciting the riot at the Capitol — Representative Eric Swalwell, Democrat of California, suggested the matter would be presented to senators.